I’m a band director, and so the fall is busy with games and rehearsals and competitions (which are going great this season!). But, it makes it really hard to find time to work on the house, but we’re trying! I really, really miss having time to work on it, even though I love my day job. Sometimes, I’ll get home at 9:30 at night after a rehearsal, and just spend 30 minutes or so painting. It really wipes my mind clean before I head to sleep.

The wardrobe project is still going, little by little. I’m still really excited about it, even though we don’t have enough time to really crank it out. The large boxes are DONE, which is so great! 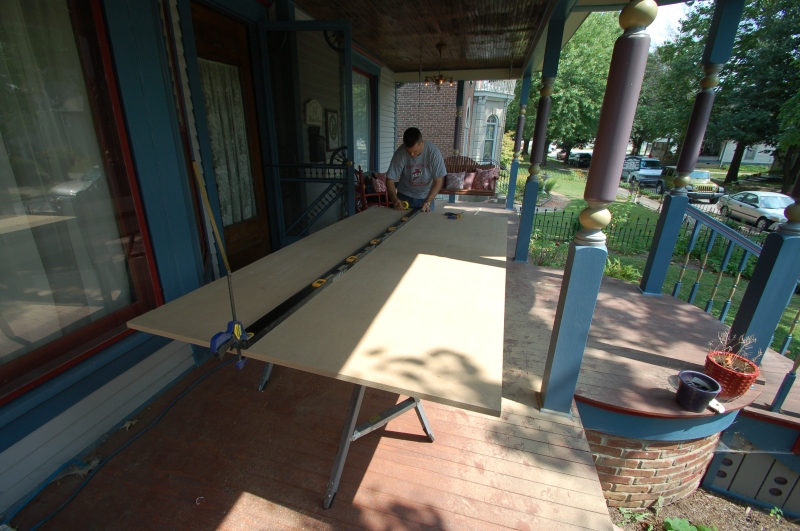 I am a big list maker, and Doug is not. Or rather, I’m a super detail oriented list maker (Doug tells people I have lists of lists of lists). Doug’s list for the wardrobe looks like this :

So, we have a loooooong way to go.

We built the second large box last weekend, and this one is going in the corner, so it had a few more dimension quirks to be able to work around the existing baseboards. But it went together smoothly! 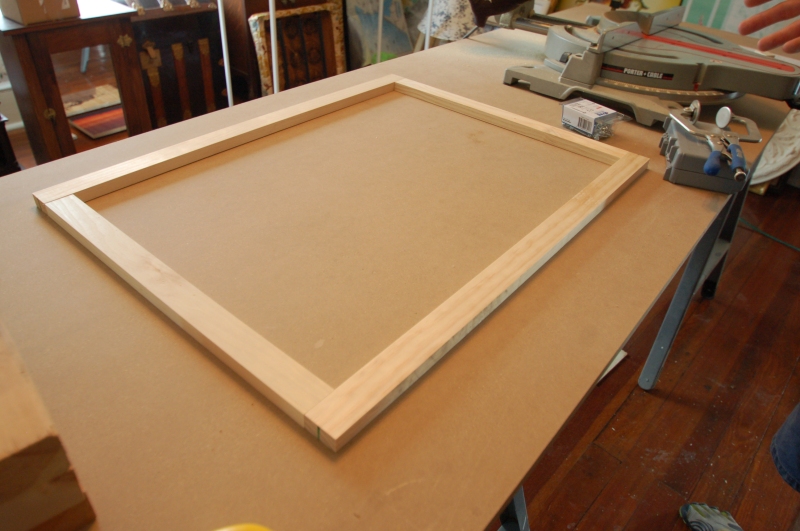 In fact, when making this last box, I made a time lapse video of putting it together – the dry fit, the glueing, and the clamping. Enjoy!

I’ve also been working on getting more of the room painted black. I am in LOVE with it, and shockingly, it only took three coats! 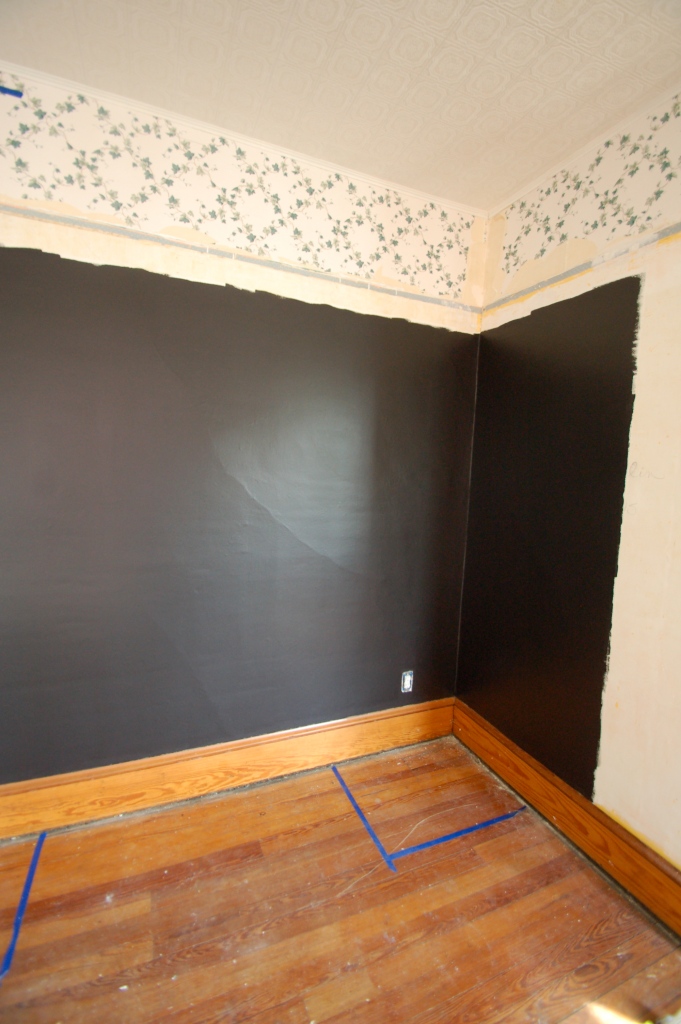 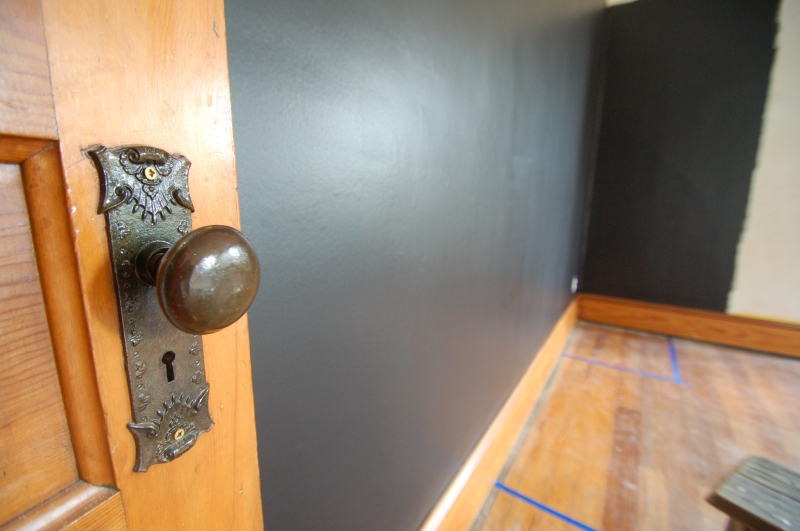 I’ve also been working on some of the architectural details, like painting the ceiling medallion, so it’s at the ready when we are set to install it!

These are going to be the doors for the upper part of the cabinet – they are old picture frames, and I love them. We have some mirror that we’ll cut and put behind it, so it should be a fun part of the room.

The wardrobes are being painted white, so white they went! This is just the primer, and not the final color.

I love the details and the cracks and the age of the pieces. Isn’t it great?

I’ve also been doing A LOT of sewing. This room and the front entrance hall mimic each other, and each have 6 windows in the room. Which makes for an incredible amount of light, and a horrendous amount of fabric needed for drapes. As a lover of mixing patterns, I settled on these two fabrics for the drapes. The one on the right, Calligraphy Swirl, came from JoAnn, and I bought out all of our local store, everything online, and STILL had to send my sister to her local store before I could get to my 27 yards needed. Yikes. 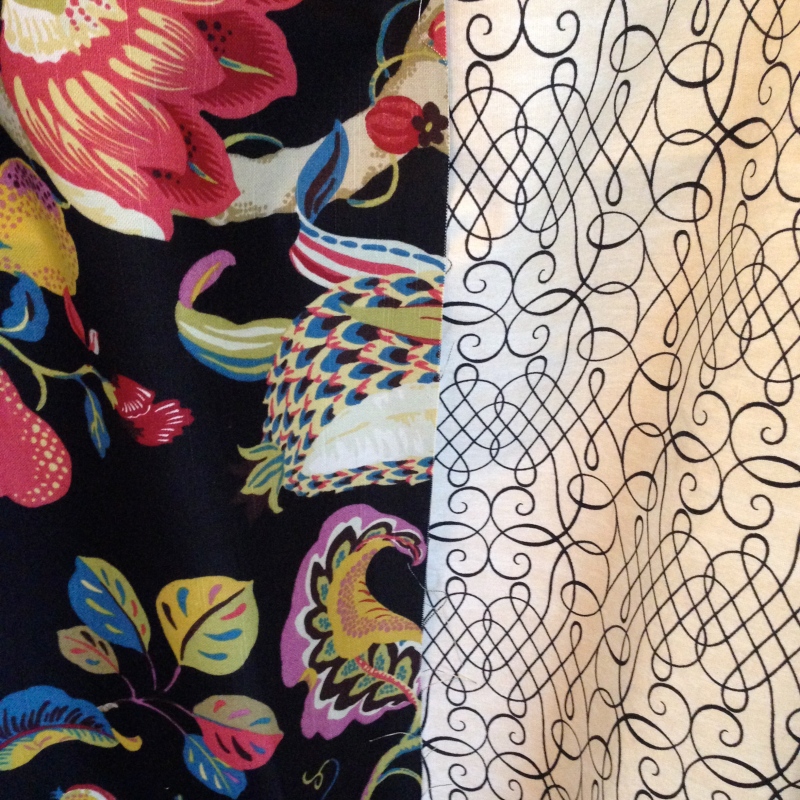 I’ve been sewing away, and think it’s a really lovely print.

I decided to inset the drapes into the windows, instead of around it. I really, REALLY love the woodwork in here, and when I realized that hanging curtains outside of it would hide the gorgeous contrast between the woodwork and the black paint, I had to readjust. Different, but I think it’ll be perfect.

The floral fabric will be a valance on top.

Nothing is tied back yet, but here’s the prototype! White sheers will be beneath this.

It’s a lot of fabric.

This is the fantastic air vent that was in the room. It was a bit crusty, and I didn’t want it to remain mint green, so I stripped it.

Some people think that the crockpot method of stripping paint is a relatively new thing – but it’s been around for EONS. I won’t go through the whole process since I’ve written about it before, but if you haven’t read it, you can see it here!

After a good long time, I worked on getting the paint off. 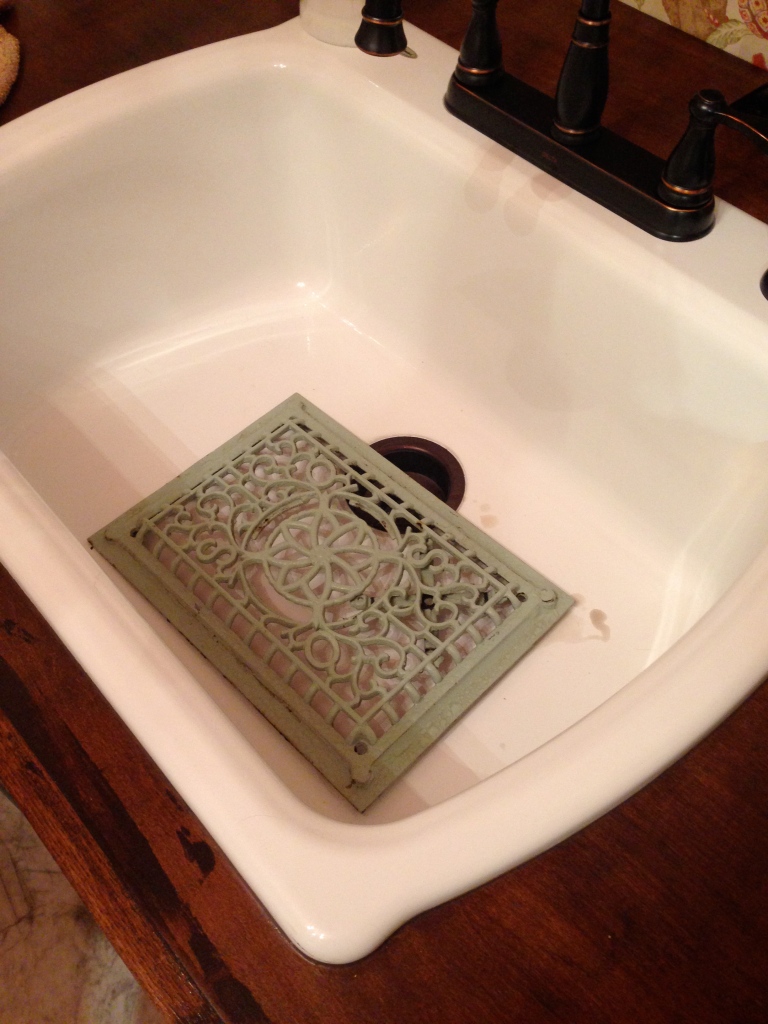 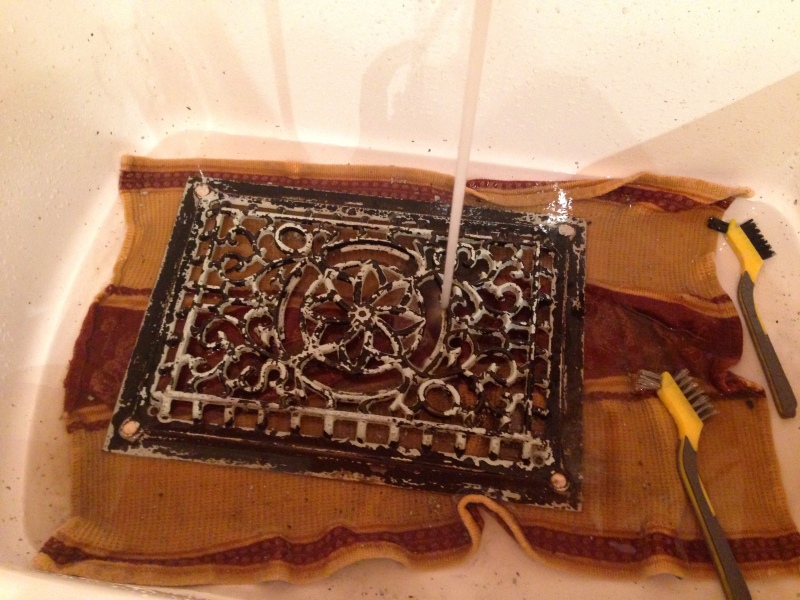 My plan was to repaint, but at least now I had a surface free of layers and gunk.

There is going to be a lot of gold in this room, so I painted a few things at the same time. A couple of yard-sale picture frames and the vent cover. The frames were originally a dull silver.

My first painting of the vent cover wasn’t so great. It turned out to be a pretty muddy gold. You can see it here on the inside, while the paint I brought to correct it is on the frame. SUCH a difference. 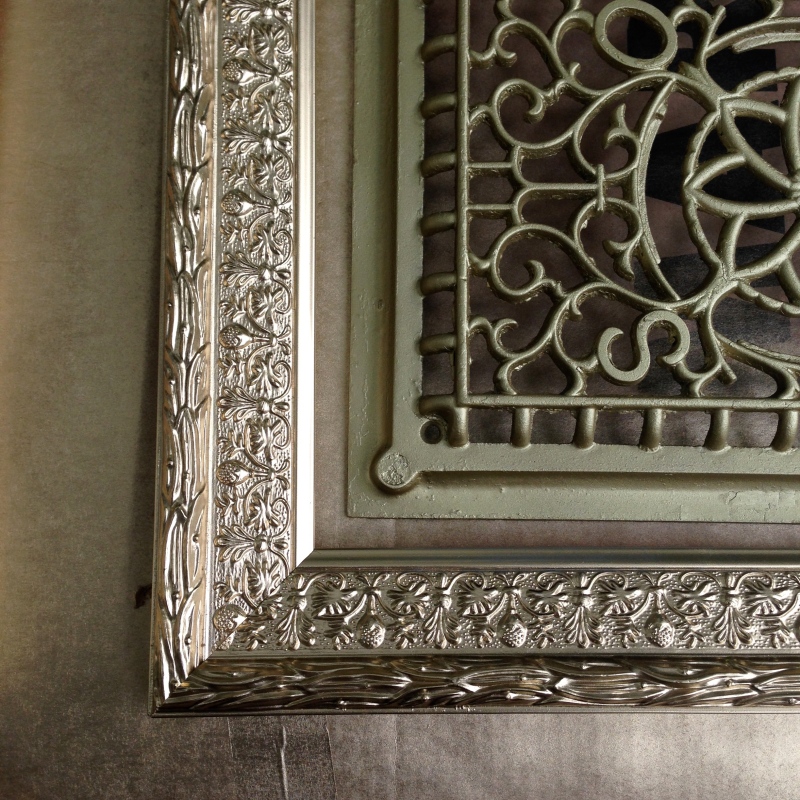 They all went SUPER gilded gold.

If you need to spray paint something that has screws (like the vent cover), use a styrofoam bowl to stick the screws into. Then, you can avoid getting paint on the threads. 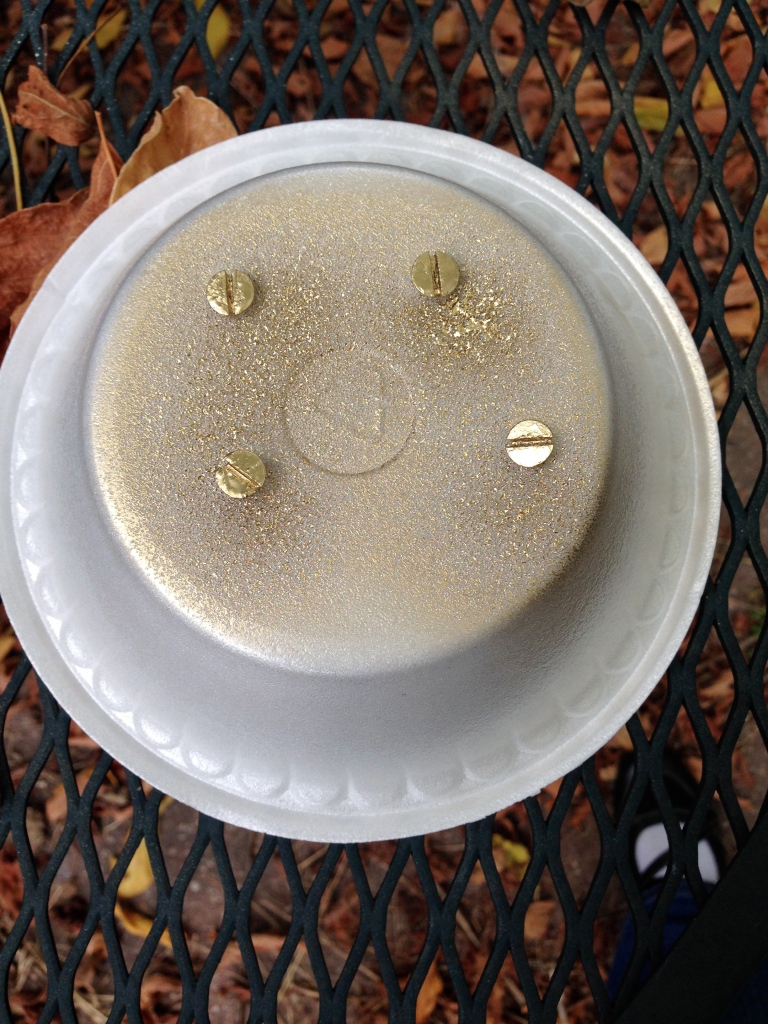 THERE’S SOMETHING PRETTY IN THE ROOM. Also, you may not criticize the black paint job – that’s only one coat, so it’s not done yet. 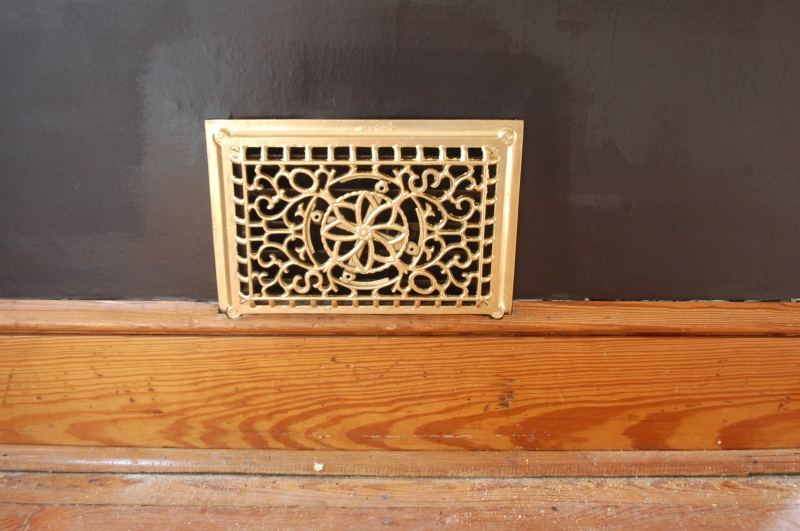 Don’t worry – the hot mess of a turret is still there, too. Oy. 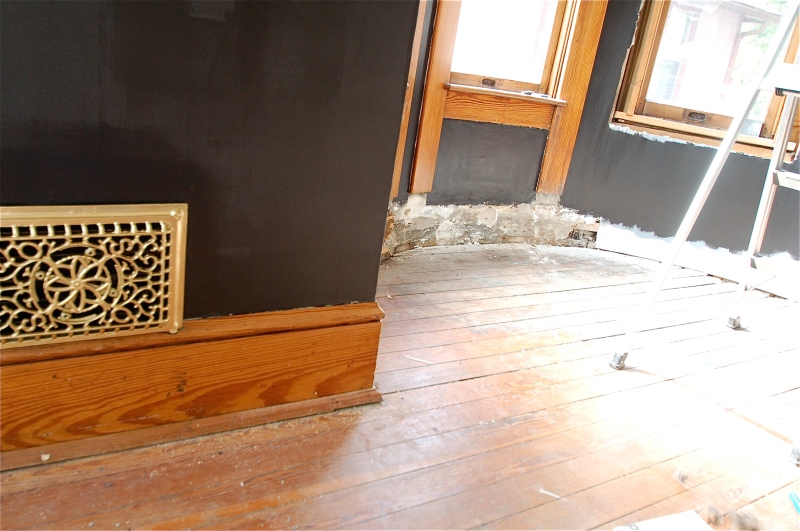 I’m going to work on painting the wardrobe soon, and I couldn’t decide on a paint color, so I took a vote amongst friends! I pulled three colors from the rug, and the lovely shade of blue won by a landslide.

That’s where we are! Close enough to see the finish line, but it’s behind quite a few bends in the road. I have my fingers crossed for a finish by Halloween – but I don’t know how likely that is…..

I know this wasn’t a barn-buster of a blog post – “YOU GUYS, SHE SPRAYED PAINTED THINGS! I LEARNED SO MUCH!” But, it’s the reality of life when you’re super duper busy. We’re so excited to get more of the big stuff done soon! 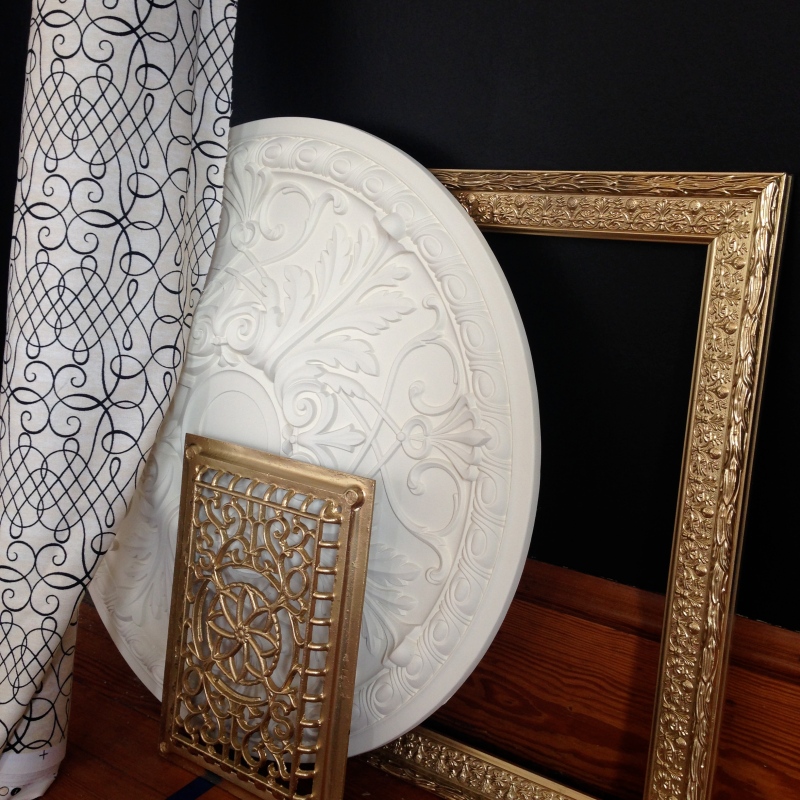 Feeling very thankful today. Big storm last night that only took out our power for 10 hours. Some buildings downtown a few blocks away lost their roofs - so thankful that we just have a very crooked weathervane. Thank you to the electric workers and street department for all their work through the night!
If possible, I might just stand here for the rest of my life. Bring snacks. #ihavethisthingwithfloors
New up on the blog - the glamorous world of wood rot and how it’s being fixed beautifully by @virtuosohardwoods - they’ve given me so many pictures in this world of no-contact that I’m going to do about 1487 blog posts on the floor (and they will all be amazing). Link in profile and stories!!!
Lunchtime walk. 🦈
Evening Walk. So much dog walking!
I love color. A lot. I shy away from grays and beige and white. The more color and pattern, the better! So I am REALLY excited for this week. This week’s #52weeksofhome theme is “Color,” and I can’t wait to see the color in your homes! Some of these pictures I had to steal from the past - since all of the furniture from the first floor is packed away since the floors are being redone! But here’s a little taste of the color we have. Make sure you post and share and tag some friends to join in! #52weeksofhomeweek15 📷 Don't forget to 🔹tag #52weeksofhome (and follow the hashtag) 🔹Please make sure to tag #52weeksofhomeweek15 so we can all find each other's pictures easily 🔹tag a friend to have them join in! I’m eager to see everyone’s posts and draw delightful inspiration each week! It's just a fun way to play show and tell! 📷 Full list of weeks on my page, and I’ll post the current and upcoming weeks with highlights of the week each weekend!
Lunchtime walk. ❤️💚❤️
Lunchtime walk.
Evening walk. My street. 💜❤️💙
Hardware week is always so amazing. They are the most practical pieces of art, and the amount of detail - whether intricate or simple - leaves me in awe. This week’s theme for #52weeksofhome : was “Hardware,” and it did not disappoint AT ALL. Please check out the tagged feeds for more eye candy - and look at the hashtag for more pictures from this week! Of you haven’t joined us, jump on in! We want to see your projects (and help cheer you on!). Make sure you share and tag with anyone who should join us! #52weeksofhomeweek14 🏡 Next week’s theme for Week 15 is “Color.” I cant wait to see how this is interpreted! 🏡 Want to jump into the photo challenge? Jump in this week, or start at the beginning (or any other week). Please make sure to tag #52weeksofhome, as well as the numbered hashtag for the week so we can all find each other's pictures easily! You can find a complete list in my feed, but I’ll also post the current and upcoming here - just swipe. It’s just for fun - a grown-up (or not) version of show-and-tell! Check out the hashtags for more pictures from some amazing homeowners.