If you know us, this story is old news. But I feel like it’s an important one to write about, for those just joining us. There are about 5 houses in Franklin that we always have been in love with. It was going to take a LOT to tempt us away from Jackson Street, but when one of those five houses (which, was actually my favorite) came on the market, for a ridiculously low price, I wanted to go inside. Since we had just bought the Cottage next door, this didn’t seem like the wisest decision. I mean, Jackson Street had become our home. The bathrooms and kitchen were done to perfection, and we loved it. But something about the Victorian on Martin Place just kept at us. Maybe it was the fact that I kept looking at it online. Maybe it was the grainy, dark, horrible realtor pictures that didn’t tell you ANYTHING about the inside – which I cheered on, because if there were GOOD pictures, someone was apt to buy it. I just really wanted to see it. Even if we didn’t buy it, I wanted to see it.

Old, Prominent Houses are often named by who built them, or the most prominent person to live there, or both. This house is the Murray Bryant House, named after Henry Murray, a cattle farmer who built the house as his city home, and Roy C. Bryant, a prominent builder and lumber baron who served as Franklin’s Mayor from 1930-1936.

I got my wish, after a 13-hour car ride of negotiations coming home from vacation. Let’s be honest though – Doug wasn’t a tough sell. Once I told him that the price was lower, and we went of the specs, he was on board to look, if not to buy. We actually stopped at a giant antique fair in Springfield, Ohio, on the way home. I pointed out furniture and chandeliers that would look AWESOME in our new house – you know, the one that we hadn’t stepped foot in. Doug is so accommodating to my crazy.

Armed with a camera, flashlight, and notebook, we walked the three blocks to the Victorian the next day. We beat our realtor there, and had some time to walk the perimeter. Like Cher says in the epic film “Clueless,” “She’s a full-on Monet…From far away, it’s OK, but up close, it’s a big old mess.”

There was woodwork and paint peeling off. There was more slate on the ground then on the roof. You could tell animals had moved into the holes on the exterior. It wasn’t pretty. Except…. that it was gorgeous.

We went up on the porch, and I looked in the left front window, and while Doug was checking out damage on the porch. What I saw made me gasp. I was literally breathless and speechless.

When Doug tells the story, this is where he says, “I knew right then it was going to be ours. There was no going back. It didn’t matter what was behind, above, or under that stairwell. As soon as she gasped, the rest of it didn’t matter. We would fix it. But that gasp told me it was ours.”

The Entry Hall was stunning. Out of this world, stunning. I have never seen a staircase like this. The ceilings, though not original, were a good reproduction. The is a pocket door that is about 6 feet wide – I’ve never seen a single pocket door in a residential house of this size. You could look past the décor to see the bones – the floors had an inlay that was stunning, if in need of repair. The interior turret, like much of the house, had sustained significant water damage with the absence of roof. All fixable.

The Front Parlor had more ceiling and wall damage, but a lovely fireplace and horrendous carpet. The entrance to this room had gorgeous white quarter sawn oak columns. The downstairs has 11 foot ceilings.

The second parlor (we’ll use it as the library) has wonderful features as well. For a house of this age, it is so open, due to the large sets of pocket doors, all in perfect shape (there are 3 sets, plus the large single door in the Entry Hall).

The back Sitting Room (which will be Doug’s Study) had been converted into a bedroom, with a full bath and closet attached. I was in there about 5 minutes before I knew what I wanted to do with it. 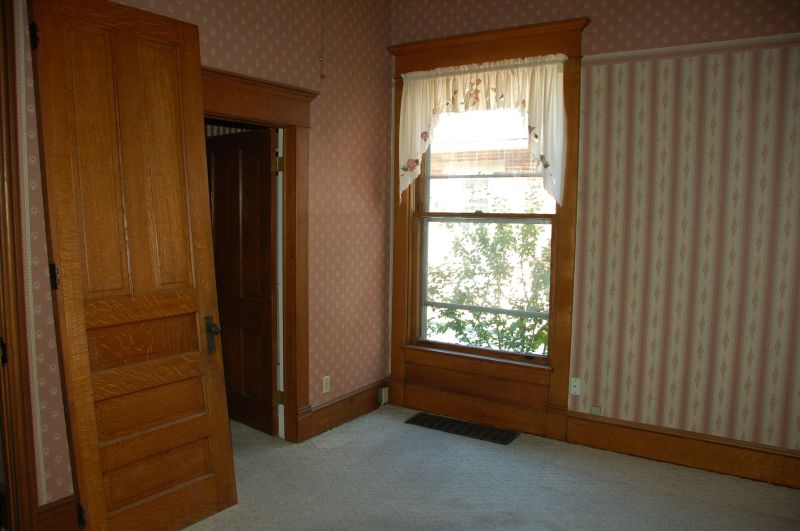 The dining room has a gorgeous textured ceiling, a terrible chandelier from the 80’s I think, and beautiful lincrusta wall treatments. The floors are in great shape, with lovely light,. This is the room I love the most as is. As long as I ignore the light fixture.

The kitchen. This was hard, because we created such a showpiece at Jackson Street. There was no counter space, it was laid out strangely, and the décor was awful. But with the 26×9 Breakfast “Nook,” there were possibilities. But it would be a complete gut and do over. This house wasn’t being nice on the checking account already.

You can get to the upstairs from the front stairwell, or from the servants’ stairwell off the kitchen. Upstairs, there are 4 chambers (bedrooms). The front bedroom with the turret has great lines, amazing light, and blue-strawberry wallpaper. Not kidding. This will be a guest room.

The second room, has significant ceiling and wall water damage. This will become my studio, sewing room, and office. 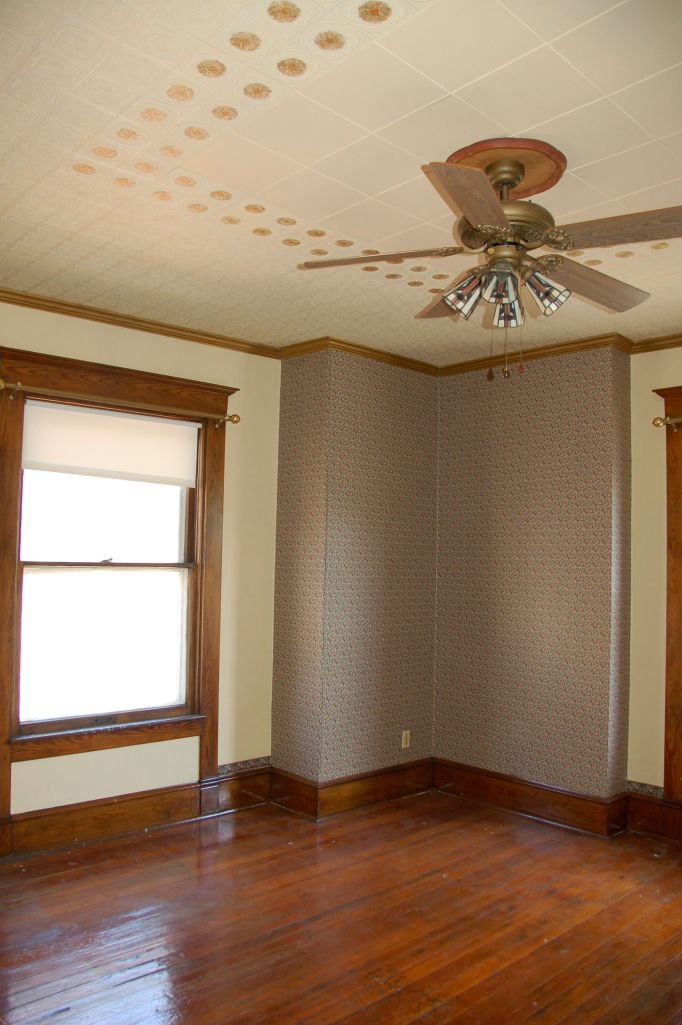 The master bedroom used to be two bedrooms, so it is perfectly set up for a bedroom and dressing room. It’s HUGE. It’s also perfect set-up for Cinderella, or the cherub-infused photo shoot of your choice.

The master bathroom is small, dingy, has CARPET (for the love) and it has a horrible layout. All 4 bathrooms are awful. But that was part of the appeal. I love designing bathrooms the most, and I love playing with the layout. I am so excited to steal some room from the bedroom and make it incredible. The space is there!

The next bedroom has (wait for it) green shag carpet, washer and dryer hookups, birds escaping from the wallpaper, and a balcony. Guest room number 2! Off of this room is another horribly laid out bathroom. But with good light and bones. 10 foot ceiling up here!

Also off this room is a stairwell to the third floor. I hesitate saying attic, because there are 9-foot ceilings in the center of the room. It looks like a dorm – five rooms off a long hallway, with great closet spaces, and a bathroom (horrible layout, have I said that already?). The bathroom come to us straight from 1985 (which, is actually the last time this house was renovated).

If we had a list of everything we wanted in a house, the only thing this is missing is a garage. But the basement with 8 foot ceilings works for a workshop (for now). It has everything we ever wanted, including being in downtown Franklin (to walk to restaurants and the Artcraft movie theatre), and it has a turret and a balcony.

Love at first sight. The more we went through it, and the more damage that we found, it broke our heart. This house needed passion, and a bit of crazy, to save it. No hesitation. We’re in.

And with the help of a local bank, we were able to finance the house, plus enough to restore the exterior (except the porch, which we will be able to afford later), get a new slate roof, and gut the kitchen and install the kitchen of our dreams. The loan allowed us to do some of the work ourselves (we did the majority of the kitchen, except moving walls and drywall…), which was great, because most loans require a contractor. We had to submit a DIY resume, proving that we had the skill and know-how to do it on our own. So the kitchen was ours, and we hired Scott Brown and the Brown Remodeling Company to do the exterior restoration. He and his crew focus exclusively on historic homes, and we couldn’t be happier with the team of people who came together to help us save this home.

There’s the first glimpse of the adventure.

This week’s theme for #52weeksofhome : was “Looking Up,” and there were so many good entries this week. It’s so great to get a different perspective on things - especially now, when we’re all learning to have different perspectives on everything! Please check out the tagged feeds for more eye candy - and look at the hashtag for more pictures from this week! Of you haven’t joined us, jump on in! We want to see your projects (and help cheer you on!). Make sure you share and tag with anyone who should join us! #52weeksofhomeweek13 🏡 Next week’s theme for Week 14 is “Hardware.” Knobs, pulls, handles, hinges, brackets.... show and tell your hardware! 🏡 Want to jump into the photo challenge? Jump in this week, or start at the beginning (or any other week). Please make sure to tag #52weeksofhome, as well as the numbered hashtag for the week so we can all find each other's pictures easily! You can find a complete list in my feed, but I’ll also post the current and upcoming here - just swipe. It’s just for fun - a grown-up (or not) version of show-and-tell! Check out the hashtags for more pictures from some amazing homeowners.
Today I discovered raw plaster and adding “skim coating everything” to my to do list..... 🙃
Homemade chocolate peanut butter ice cream!
Afternoon walk. 💙💚💙
Making very slow but steady progress!
I’ve seen so many people coloring lately, and it made me think about the coloring page @thisoldhouse made of our house when we were on the cover in 2016. (It was the coolest thing out of that experience!) So if you get bored and want to screen shot this and color it, here it is! But you HAVE to share it with me. I want to see all the fun colors you have. ❤️🧡💛💚💙💜
The cabinet where my husband keeps his “to restore” cast iron in was out of control, so we emptied it tonight to reorganize. So. Much. Cast. Iron. 🍳 The electrolysis tank has a lot of work to do.
Hooray! I found a second layer of wallpaper - with DRYWALL MUD on top of it. Try not to be too jealous of me right now. I know it’s hard.
Lunchtime walk. 🌈❤️🌈❤️
I should feel sad when I steam off a bird. But I don’t. 🤷🏻‍♀️