I like fall break. I’m catching up on writing! If you missed the last kitchen post, you can find it HERE.

Now for the fun stuff – actually making it a kitchen! And adding the details that make the modern kitchen fit in a 1902 Victorian – it’s a hard balance, but I hope we did it well.

We kept with black cabinets, but unlike Jackson Street, I wasn’t the one painting them, which is good for the sheer size and number of cabinets, but sad because I do love painting cabinetry. The father of two of my students is a cabinet maker, and we were casually talking to him about the kitchen. We had already decided to go with a big box store, because we felt there was no way we could afford custom cabinets – but he convinced us to let him take a look. Some creativity and awesomeness later, and we had a partnership.

Just like my mom, our cabinetmaker Scott was really unsure of the cabinetry being black, but once he saw it done, he was a believer. Victorian Kitchens often had painted furniture, and we loved how dramatic it made the kitchen look at Jackson Street. To me, the black cabinetry works in the two spaces in different ways : the Butler’s Pantry is smaller, and the black cabinets make the space feel cozy and somewhat closed off – which I like. That’s just how a Butler’s Pantry should feel. In the Main Kitchen, there is so much light and space, that the color grounds the room and makes it feel like it is the perfect size.

There were lot of little details, from plotting out what would go in each cabinet (before finishing the design of the kitchen) and creating spaces that would make the kitchen work best for us. I LOVE this pull-out pantry. It’s only about 10″ wide, but it’s fantastic. 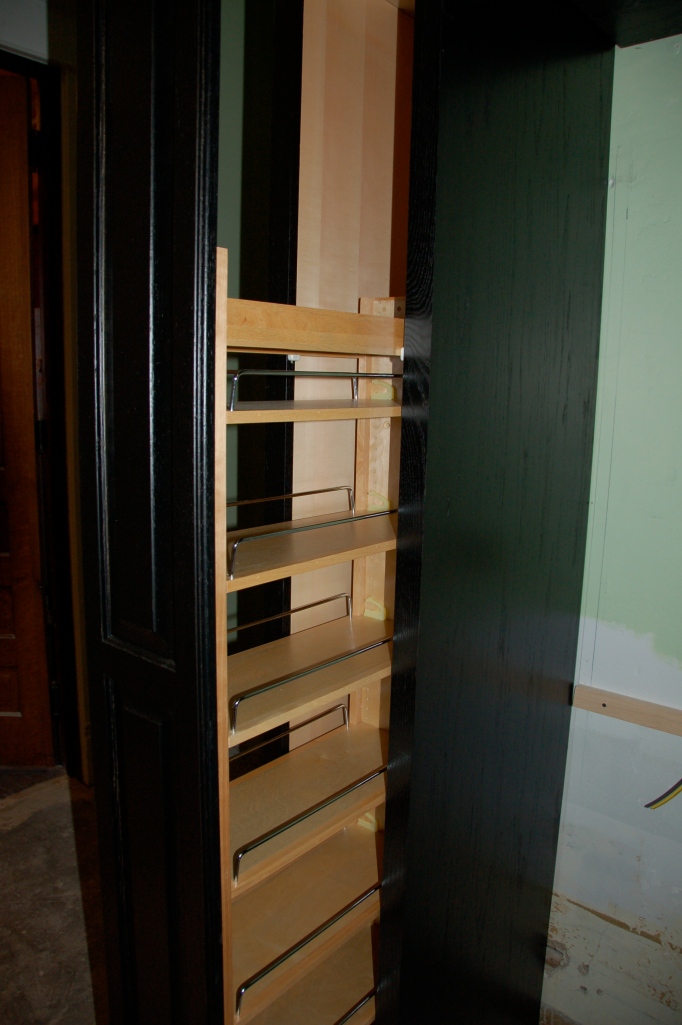 Once the cabinets were set, it became a kitchen! It was so crazy cool to see the walls go up, and to see it become a room, but now it had become a KITCHEN. I’m a big believer that cabinets should go up to the ceiling, otherwise they look weird (especially in a house with 11-foot ceilings). We did just that in the Butler’s Pantry, but in the main kitchen, we couldn’t. We used 48″ tall cabinets there, but with the vaulted and sloped ceiling, we couldn’t take them all the way up. The storage is unreal. If you are like me, when we lived at Jackson Street, our kitchen stuff was in about 4 places because it didn’t all fit. Rarely used items were in the attic, some things were in the wall of cabinetry in the bathroom off the kitchen…. but here, EVERY single kitchen item fits, except the giant soup roasters for our Holiday party. It is amazing having everything in one place. And here, the rarely used items go in the top cabinets. I mapped out where every item would go before a single cabinet was built. A bit obsessive, I’ll admit. But it was worth it. 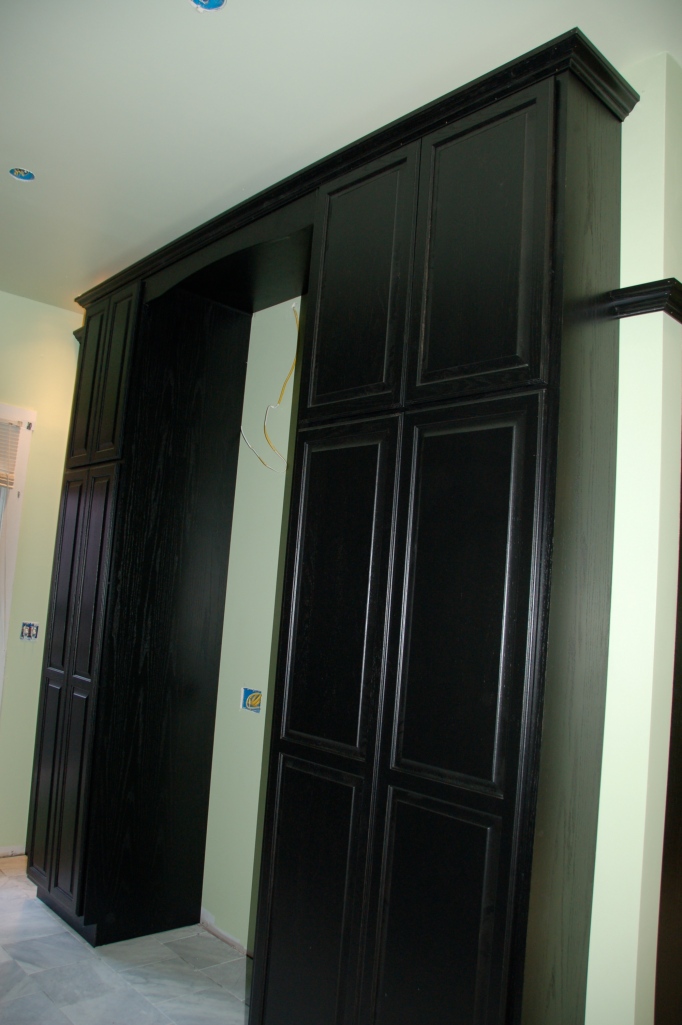 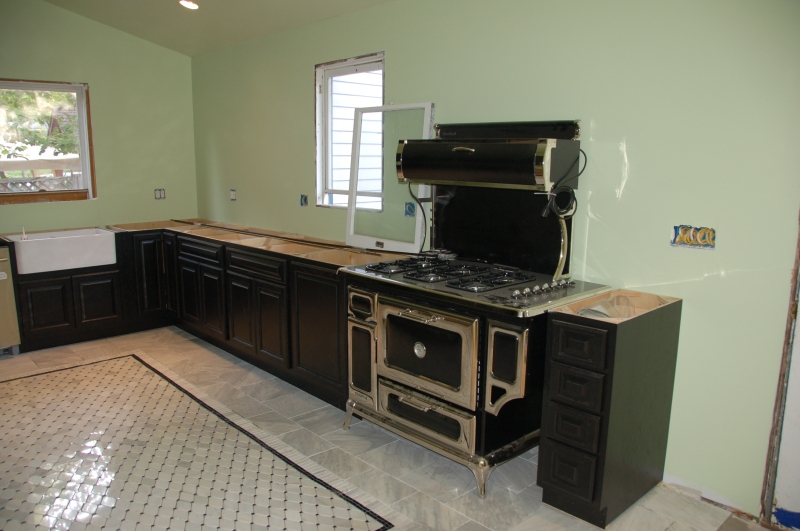 It’s funny, the first 8 months of the project was sloooooower than molasses going uphill in winter. But the last month was a whirlwind. The counters were a mess – we had originally planned on a quartz, because I wanted something white, but I didn’t want marble. When looking for the quartz, the man at the stoneyard asked why I wasn’t considering granite. I told him I thought it looked too modern (which is HILARIOUS because Quartz is crazy modern looking), and I was used to granite being either dark, or brown if it was a light color. He convinced us to go to the big stoneyard supplier in Indianapolis, Global Granite, that they use. Of course, it’s one of those places that is only open on workdays from like 11-1:30 and you need a secret password to get in (ok, that’s a bit of an exaggeration), but I did have to take a morning off work to be able to get in when it was open. Talk about overwhelming – the awesome beauty of the slabs was incredible. We fell IN LOVE with a white/light gray/black slab. Alas, not ONLY had it been sold to someone, but the giant crane came and took it away from us to put it on a truck, WHILE we were looking at it. Total meanies. We thought we could order more – they said, “It’s ordered, and should be here from Brazil in 8 weeks.” We had 2 weeks before it had to go in, 3 before the bank deadline. I was CRUSHED. So, we picked out another one. I sulked for about 3 days, when they called us and said that our first choice just got here from Brazil. What? I was so confused. Whatever. I was getting my counters. Hooray for Brazil! 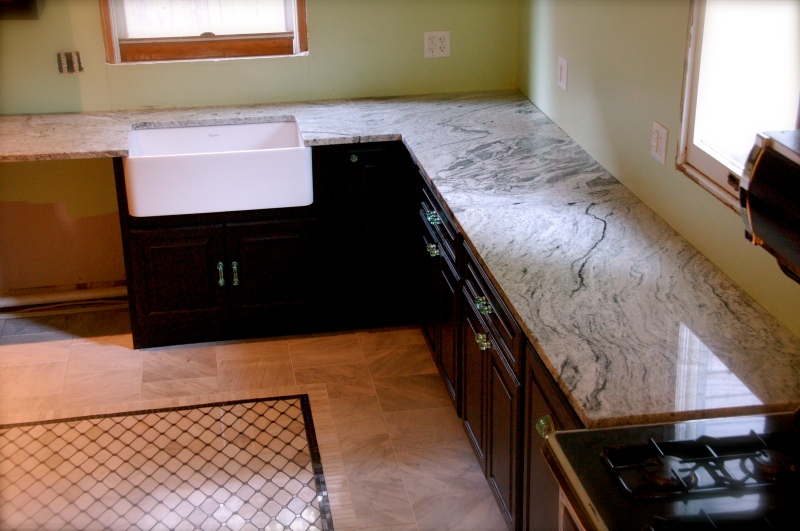 In the midst of all this, I also worked on some lighting projects for the Butler’s Pantry and the Laundry Room (the Main Kitchen Chandeliers – all three of them – just needed re-wiring. You’ll see those in the next post). I had a lot of fun, since lighting is my fav. My $.02 : When restoring an old house, ALWAYS go vintage on the lighting. To me, it’s the number one thing that makes your house look authentic. Just make sure you re-wire if necessary!

The next project we actually did after the bank deadline was over (but I am including here, since it is a detail). We painted and installed some open shelving in the kitchen for dishes and display. I like having the dishes out, and it’s a nice break from wall cabinets on that side of the room. 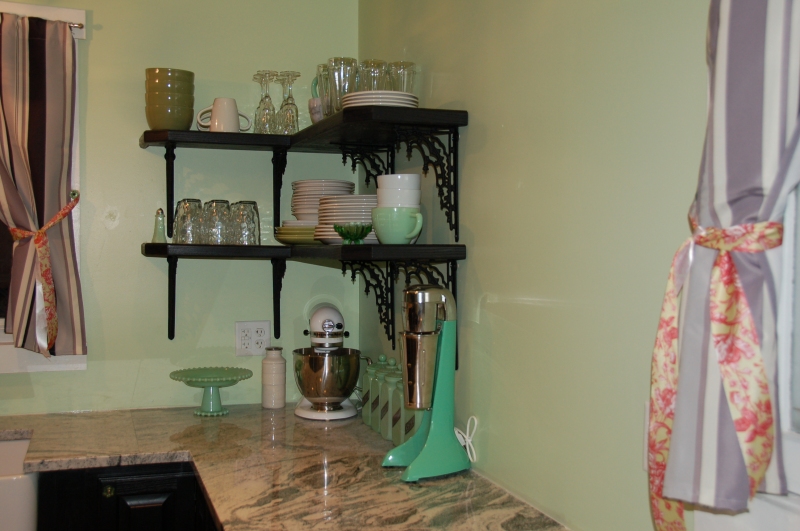 Only one more kitchen entry left, for you to see the final product! We really do love it so much.

This week’s theme for #52weeksofhome : was “Looking Up,” and there were so many good entries this week. It’s so great to get a different perspective on things - especially now, when we’re all learning to have different perspectives on everything! Please check out the tagged feeds for more eye candy - and look at the hashtag for more pictures from this week! Of you haven’t joined us, jump on in! We want to see your projects (and help cheer you on!). Make sure you share and tag with anyone who should join us! #52weeksofhomeweek13 🏡 Next week’s theme for Week 14 is “Hardware.” Knobs, pulls, handles, hinges, brackets.... show and tell your hardware! 🏡 Want to jump into the photo challenge? Jump in this week, or start at the beginning (or any other week). Please make sure to tag #52weeksofhome, as well as the numbered hashtag for the week so we can all find each other's pictures easily! You can find a complete list in my feed, but I’ll also post the current and upcoming here - just swipe. It’s just for fun - a grown-up (or not) version of show-and-tell! Check out the hashtags for more pictures from some amazing homeowners.
Today I discovered raw plaster and adding “skim coating everything” to my to do list..... 🙃
Homemade chocolate peanut butter ice cream!
Afternoon walk. 💙💚💙
Making very slow but steady progress!
I’ve seen so many people coloring lately, and it made me think about the coloring page @thisoldhouse made of our house when we were on the cover in 2016. (It was the coolest thing out of that experience!) So if you get bored and want to screen shot this and color it, here it is! But you HAVE to share it with me. I want to see all the fun colors you have. ❤️🧡💛💚💙💜
The cabinet where my husband keeps his “to restore” cast iron in was out of control, so we emptied it tonight to reorganize. So. Much. Cast. Iron. 🍳 The electrolysis tank has a lot of work to do.
Hooray! I found a second layer of wallpaper - with DRYWALL MUD on top of it. Try not to be too jealous of me right now. I know it’s hard.
Lunchtime walk. 🌈❤️🌈❤️
I should feel sad when I steam off a bird. But I don’t. 🤷🏻‍♀️