I get made fun of quite a bit for my penchant for chandeliers. For my 30th birthday, my husband bought me a chandelier (note : this is just to show how much I love them. This is not my 30th birthday chandelier – I’m 36 now, and this is a totally different light that I am blogging about). I would much – MUCH – rather have jewelry for my house than for me – and that’s pretty much how I live. When we moved into Jackson Street, the entire house had been stripped of the majority of its character (the exception : the woodwork). The entire house was filled with boob lights. If you can buy your light fixtures in bulk, you shouldn’t buy them. RULE #1.

When we first replaced a light with an antique, it was mind-boggling how effectively it changed the character of the room. I think that’s why I am so drawn to antique lights – they make the rooms and the home come to life. Martin Place didn’t really have a lot going for it in this department, either. I keep scooping up light fixtures, unsure where they are going. When I found this one, though, I knew exactly where it was going to live : the Dining Room. This Eight-Arm brass chandelier went on a journey away from Franklin, and made its way back.

We found it at the newly-opened Salvage yard, operated by Franklin Heritage : Franklin Heritage, Inc Architectural Salvage. We were told that a man moved away from Franklin to Iowa, and when he did, he took all of his lighting with him. The house he had lived in was right around the corner from ours – I know it well on the outside, and it’s definitely the same time period as the Victorian. He came back to Franklin, and brought all of his lights, and donated them.

I won’t tell you what we paid for it. I feel like we stole it. Let’s just say that I am a very good customer. 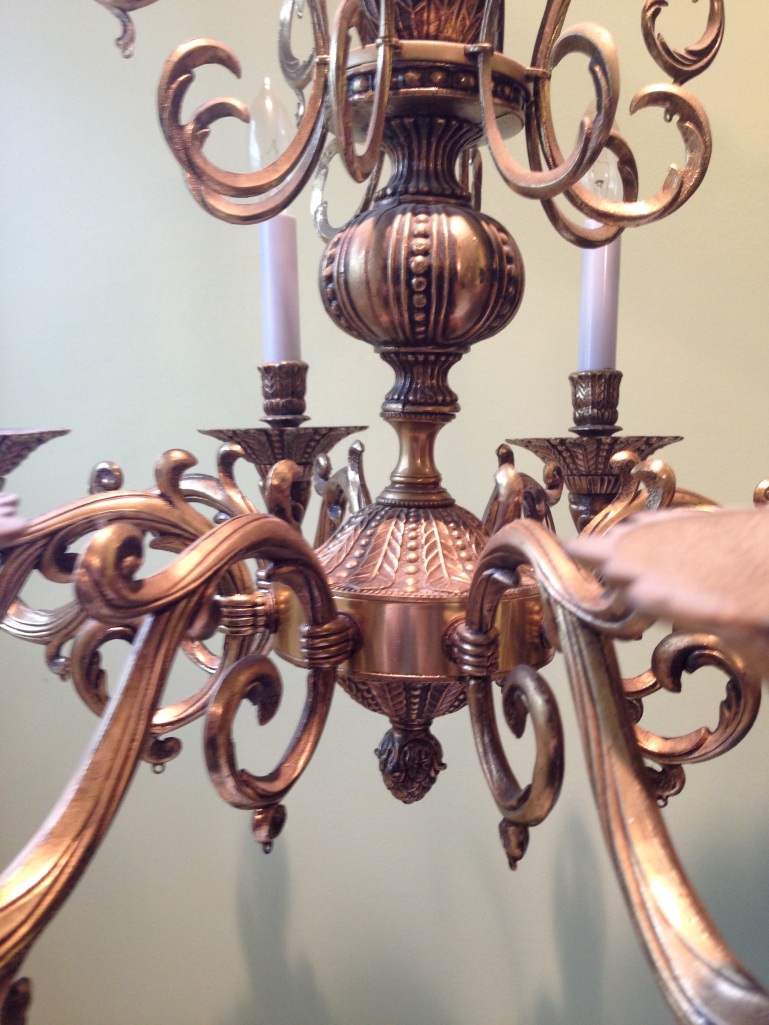 I actually was proud of myself, because I only bought two of the lights. Self-Control.

Next, I had to get a ceiling medallion. That’s a requirement, right? I went to my favorite source for all things ceiling medallions, Architectural Depot. I’m really mad because I took a picture of the medallion when it arrived, and how big it was compared to me, but I must’ve deleted it. I’m a blogging failure.

I started by playing with a few colors for the medallion. 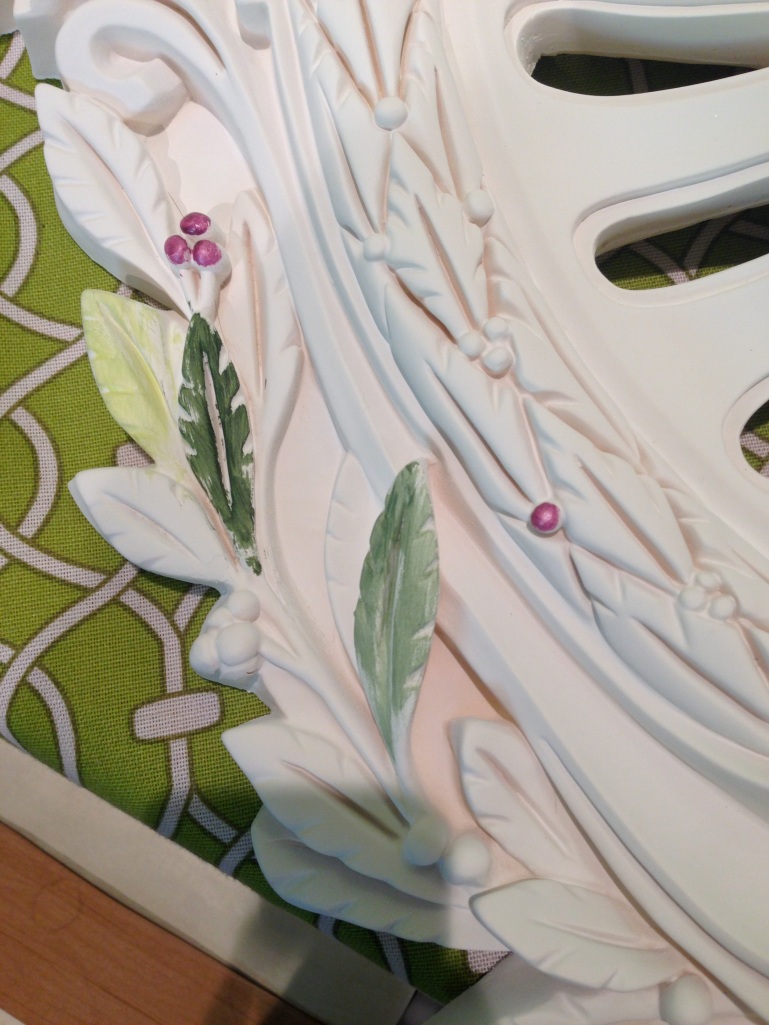 And then I painted the whole thing gold.

And then I regretted painting the whole thing gold.

And then I wondered if It would look OK once the colors were on the gold.

And I vaguely considered giving up after seeing how shiny and gaudy it was.

My husband : “You always do this when you paint medallions. You hate them and second-guess yourself. Stop. Just finish it. It’s going to be 11 feet in the air. It will be fine.” Sigh. So, I got to work. Or rather, to play.

I began adding colors one by one. I mixed some custom colors, and I think overall there are 8 colors on top of the gold. 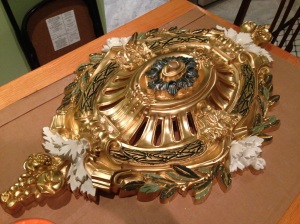 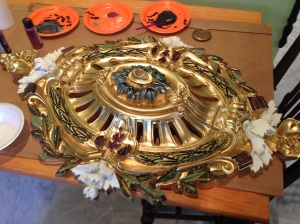 Next, the chandelier needed a bath. I took the chandelier apart and cleaned all the brass, and made her all shiny and pretty. It wasn’t in too bad of shape – in fact, the only reason we needed to re-wire any of it, was because the chain and cord were too short for our 11-foot ceilings. My $.02 : When looking for chandelier chain, if you don’t get your chain online and decide to go to a hardware store, steer clear of the lighting aisle. You’ll find prettier and longer chain in the chain / rope aisle.

If you DO need to find parts for your antique lighting and can’t find anything locally, I like Grand Brass a lot. There are other places, as well, but I can usually find what I need here. 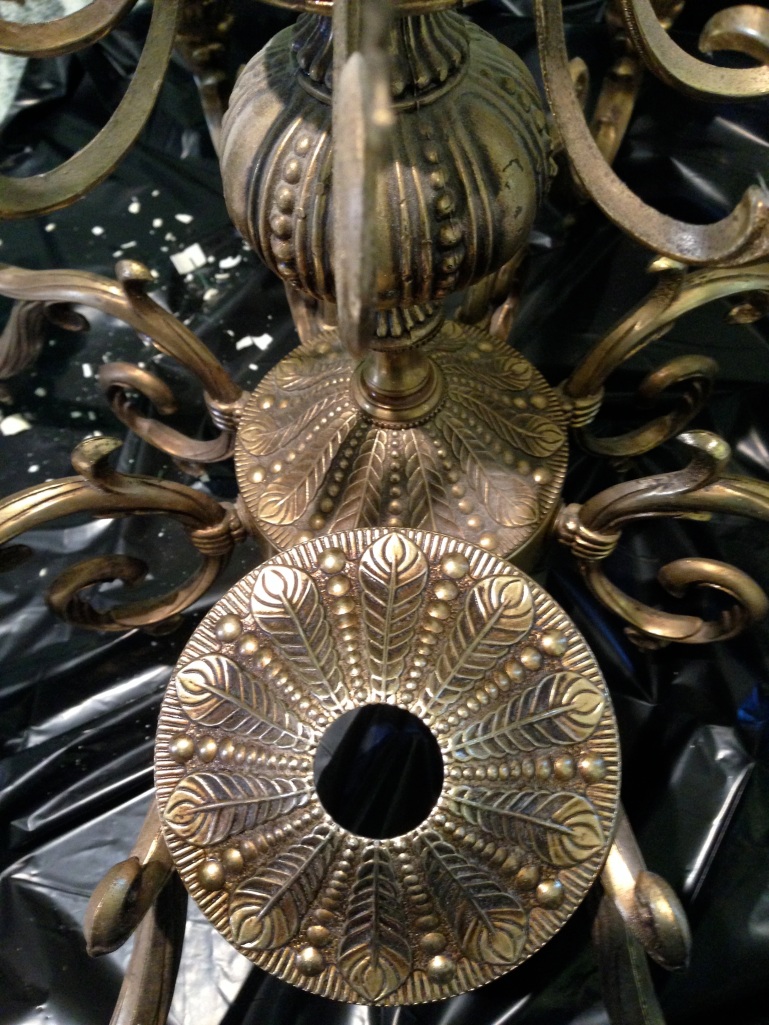 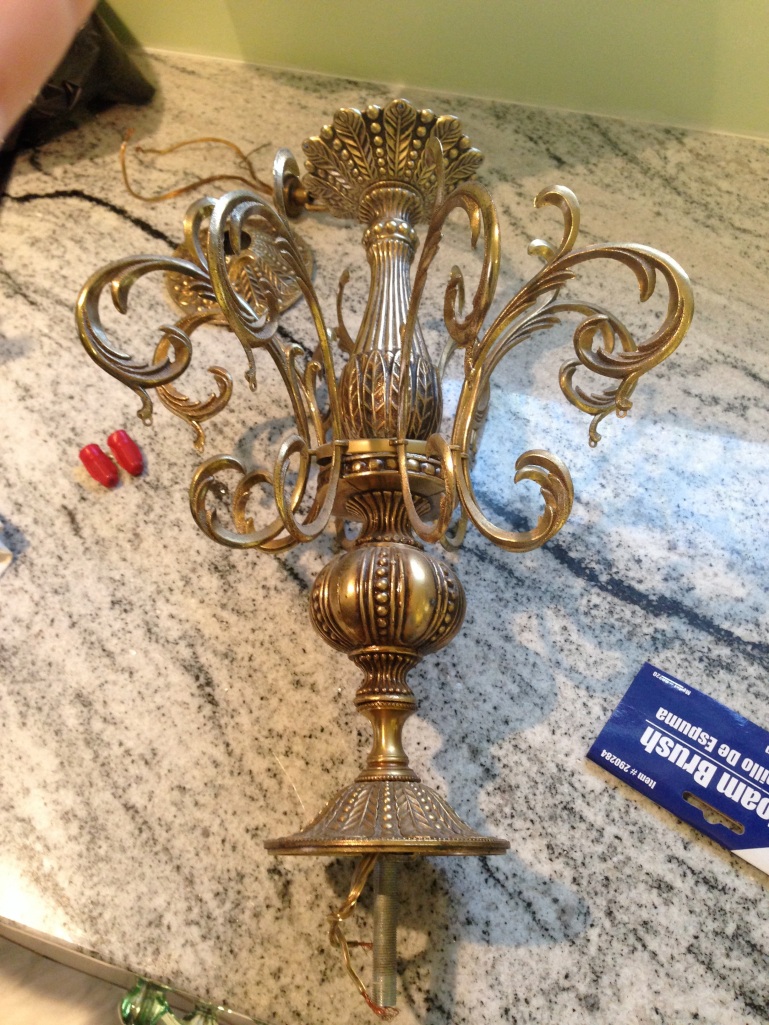 All the parts, laying in the dining room, ready to go! 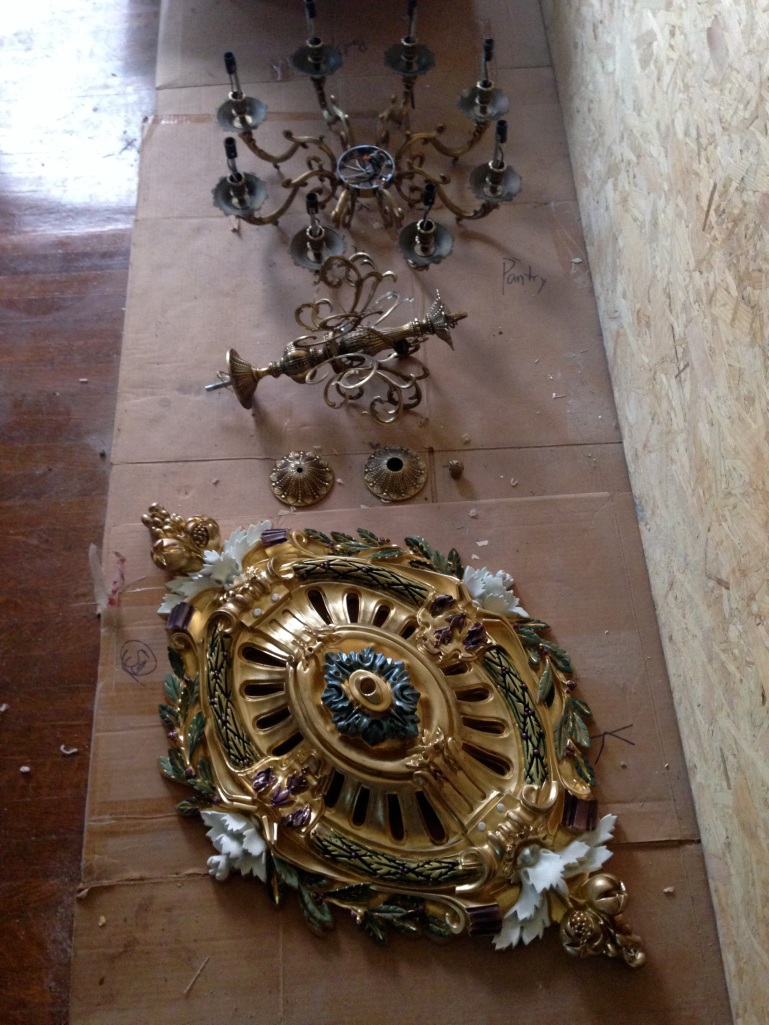 And, in case you were wondering what the light we were replacing looked like, here you go. My guess is this is from the early 80’s.

The “New” chandelier (ironically, which is MUCH older than the “Old” chandelier), had a place for crystals. First, I figured out how much it would cost to put new crystals on the chandelier. Needing 75, this was going to be WAY many more times than it cost to BUY the chandelier.

So, I went through my “Chandelier Graveyard” which is where I keep all of my extra parts and lights I haven’t found a home for yet. I found over 100 crystals. Clearly, I have an illness. The problem? They didn’t match. My friend Stephen said, “Let’s just put them on. I bet it looks fine.” Done. So, we did. And I LOVE it. I think there are 5 types of crystals on here – but it looks so eclectic and darling. My original intent was to be mis-matched until I could afford new crystals. But the more I live with this chandelier, the more I think the crystals are here to stay!

The rest of the finished product! I hope you enjoy! 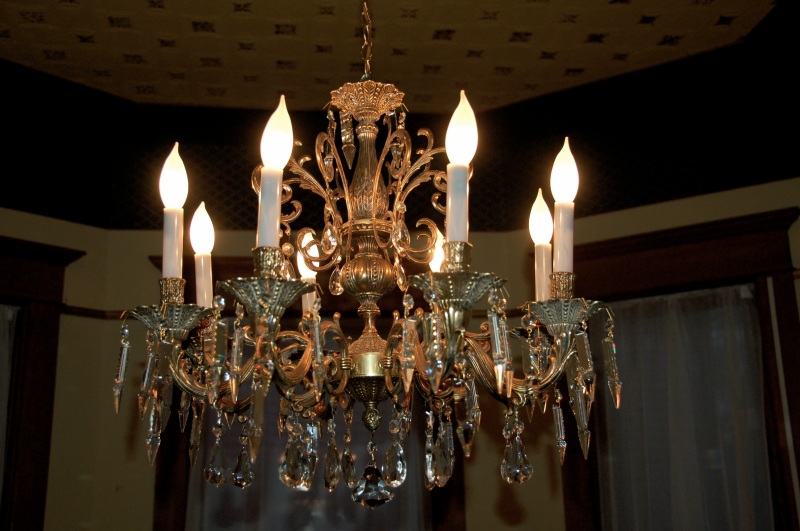 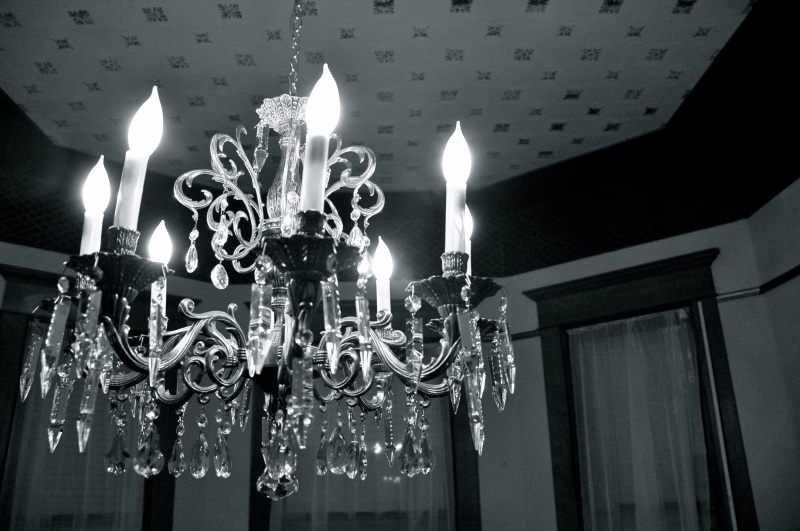