The porch is so close to being finished, I can already feel myself reading a magazine on the swing. But, as often happens with projects, the last 10% seems to take 90% of the time to do. But we ARE close. I am sad that I will be back in school before it’s completed, but the fall will be a fantastic time to enjoy apple cider on the porch.

If you remember from my post a few weeks ago, there was some sadness among people that I had taken the porch posts off. Hopefully, the new posts will sway you, and if you’d LIKE to salvage the posts we took off, they have their own bin marked “Martin Place Porch Columns” at the Franklin Heritage Salvage Store. 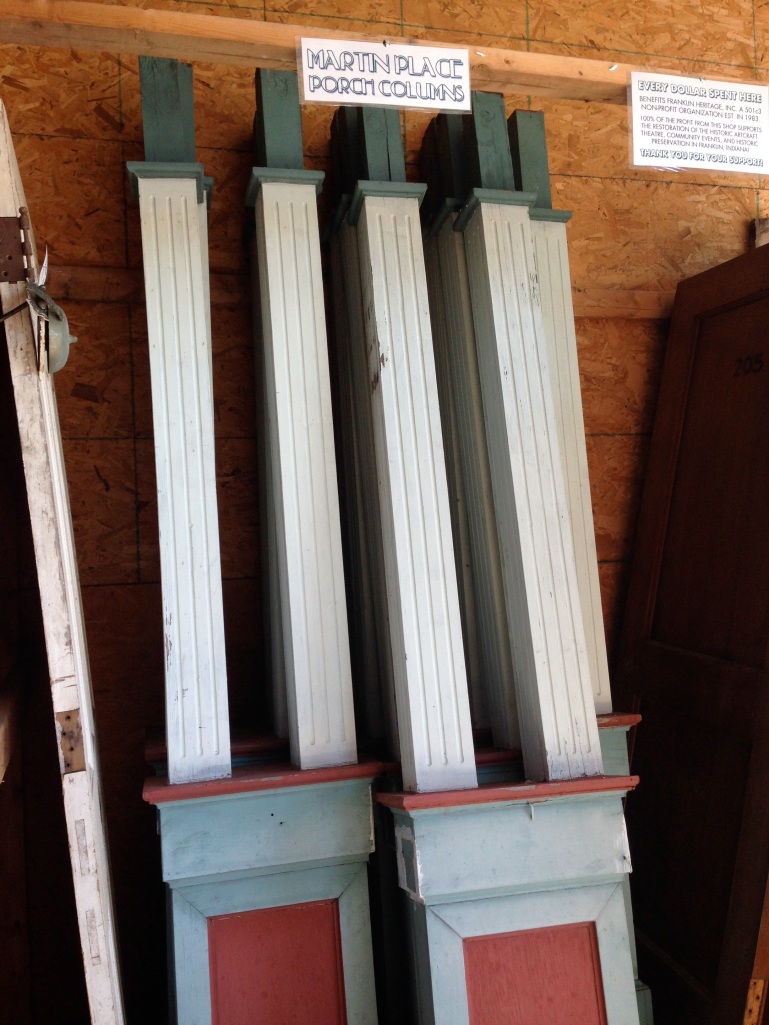 We opted to return more to the porch’s roots with our posts from Century Porch Posts. It’s amazing how chunky and huge they are coming out of the box, but they seem so small against the house!

First, everything got primed, and the porch floor became snuggly under plastic once more to protect it from the primer and paint.

We covered the back of the porch skirt with a screening, and then painted it purple to go with the fish scales on the house. 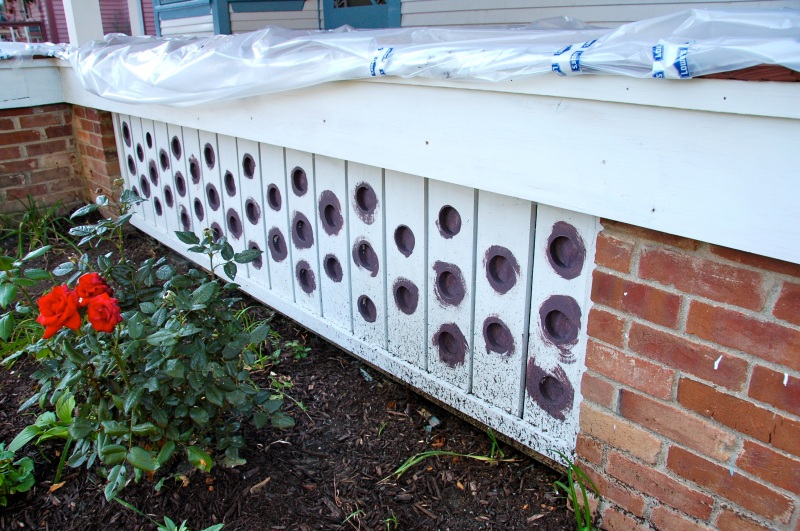 Then, they got a coat of gray overtop. SO great! 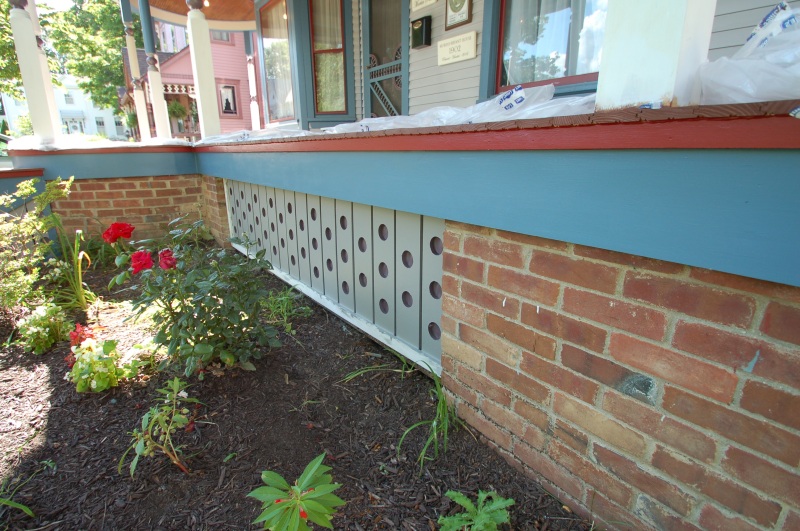 The steps got their color, as well, although we looked like a slaughterhouse for a night.

The steps looked awesome when the paint was done. I can’t WAIT to see the posts and handrail up.

And then, there was war over the porch posts.

Cody (my painter) and I went toe to toe over the color of the porch posts. I took polls and we had strong discussions.

You might be thinking : “Wait. What was there to discuss? You’re paying him. It’s your choice.”

And you’re right. It is my choice. But when you hire someone that you really, REALLY trust to work on your house, that comes with a certain level of belief in their ability to do the best job. I know color REALLY well. But so does Cody. And he does this ALL the time. I need to take his expertise into account, and he needs to take the fact that it’s my house into account. And both of us are strong-willed enough to really fight for our cause. But I didn’t just want to fight : I wanted to sway him to my side. I trust him enough to know that I can fight with him, and he’ll still do the best, most amazing job on my house. A contractor really becomes like a member of your family. He has a key, and is often working before either of us make it out of the house to go to work. You have to build that relationship, and trust it. And both of us know that we’ll still be friends at the end of this (and I still think I’m right about the color choices). If you can respect people enough to be able to disagree with each other and still really respect each other’s talent, then you have the right team on your side. I have trusted him to make 90% of the color choices on this house on his own, and this was – really – the only time I didn’t think he was spot-on perfect. Surround yourself with talented people, no matter what you do, and you’ll have a great experience.

I wanted to get a good picture of my awesome team of painters together, but it hasn’t happened yet. But here’s an action shot of Debbie, Damon, and Cody at work. They are the best. Debbie’s speciality is faux finishing and historic work. Damon is a great painter, and also a window specialist, and Cody is the lead painter who is JUST ALWAYS WRONG. 🙂 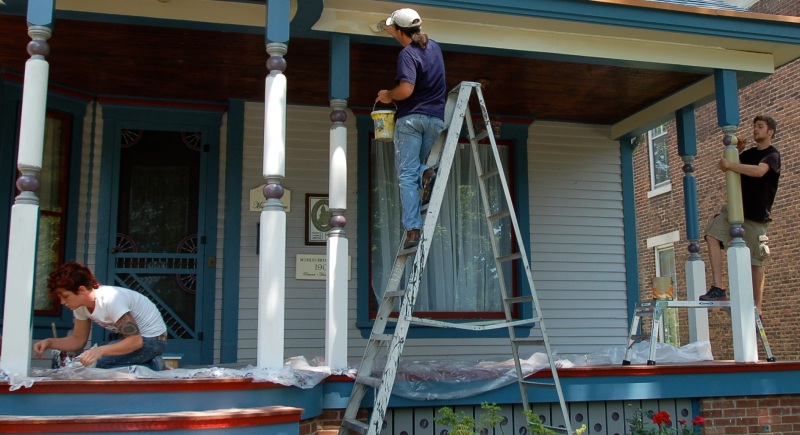 I could go into all the details about the battle, but it boils down to this :

Cody wanted the posts to match the balcony posts to make everything flow….

….whereas I was concerned with the amount of blue on the front porch window trims, and wanted the posts to stick out and be special, and not blend in.

Also, there are A LOT of colors on this house. And I chose them – and Cody figured out where they went fabulously. But if I ranked them in order of my favorite to least favorite, the blue is my LEAST favorite. I like it – but there is SO much of it on the house. I wanted the gold and purple to shine a bit. Cody also brought along Debbie, who initially was on Cody’s side, but the more she lived with the house, the more she wanted to try different things and go in a different direction with the posts. We became besties.

Then, came the experimentation. We thought for SURE that the balls on the posts were going to be purple.

And I was cool with that. I didn’t say the posts couldn’t RELATE to the balcony. I just wanted more color in them. 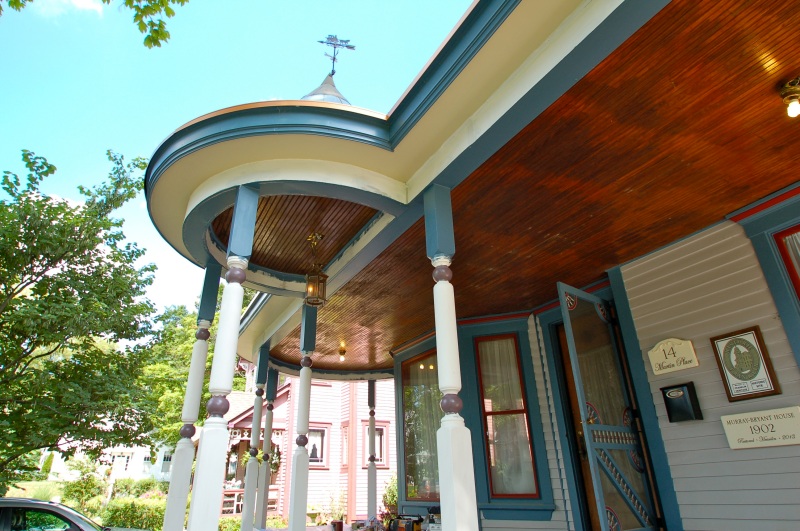 We came up with three choices : 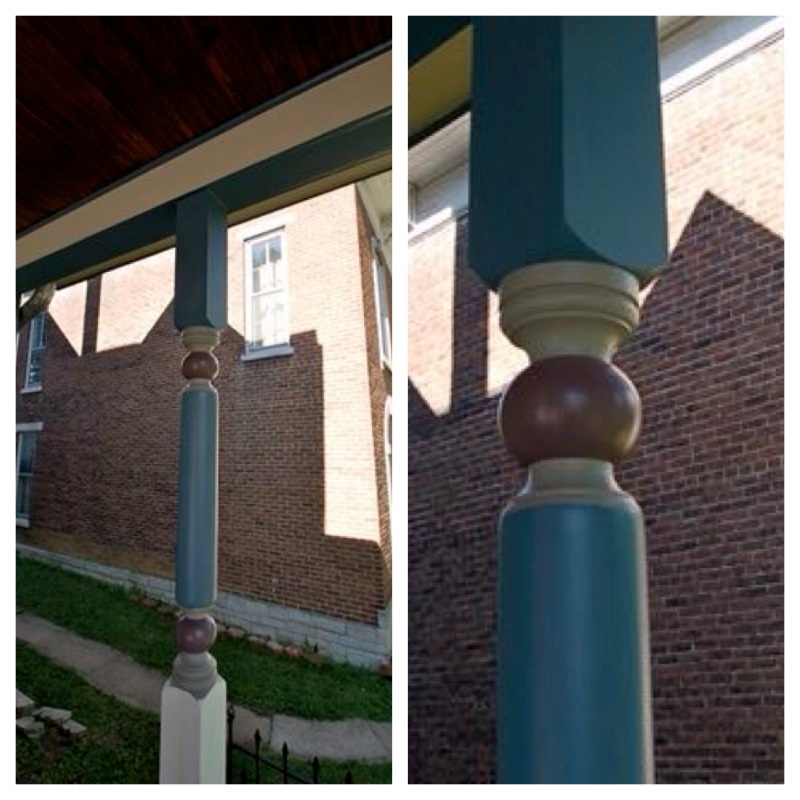 Choice B : Blue with Gold with Purple. My Favorite (and Doug’s).

Choice C : Blue with Cream with Purple. No one’s favorite. 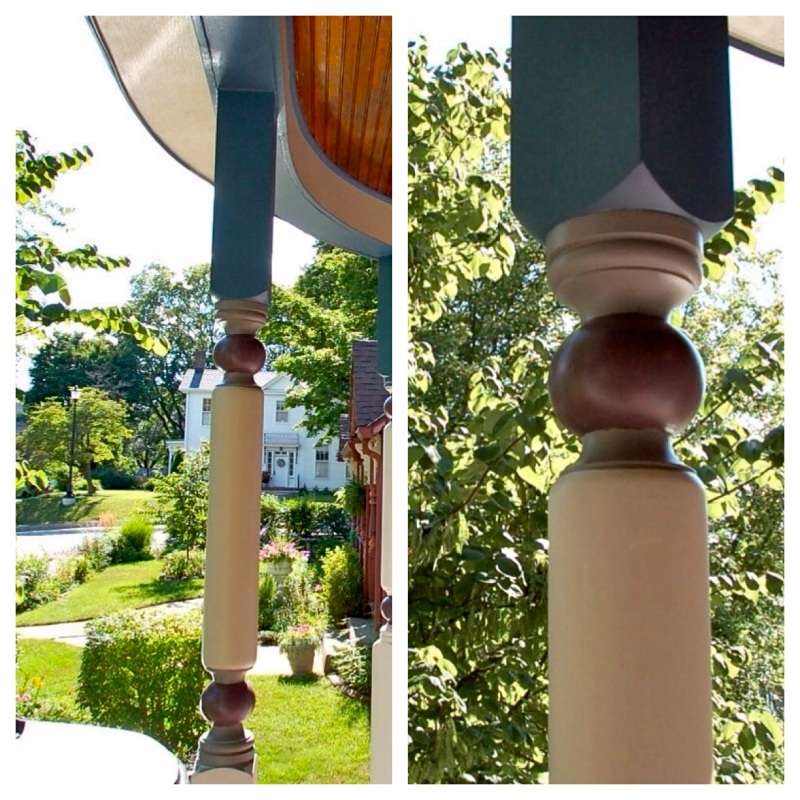 We left the next day for a REALLY early doctor’s appointment for me, and they were already here to paint. “Gold. Final choice. Do it.” Whew. Decision made.

THEN, we came BACK from the doctors, and there were TWO MORE CHOICES.

WE HAD DECIDED. Secretly, I’m pretty sure Debbie was behind it, trying to find something we would both like. No confirmation on that. 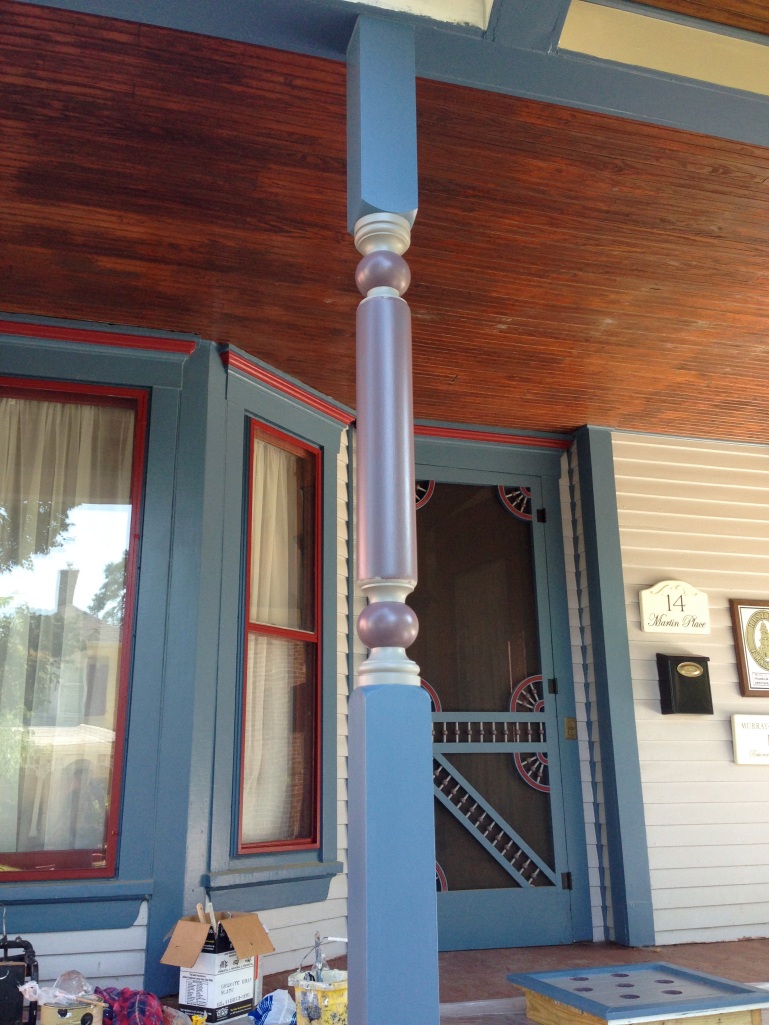 And then, the winner. Choice Five. Blue with Purple with Gold. I LOVED it. Cody is happy that I’m happy. But he doesn’t love it. I think he does. But he will NEVER admit it.

So I brought them all doughnuts and chocolate milk. Because I wanted them to know I appreciate their devotion to my insanity. Yes, those are Christmas cups in July. I don’t often do disposables. 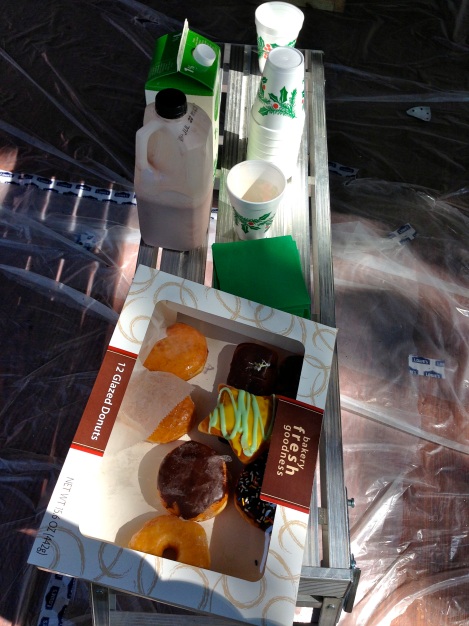 I can’t fathom that I was wrong, when this looks so great. His way would have looked great, too. But bringing the colors down from the third floor details looks AMAZING. 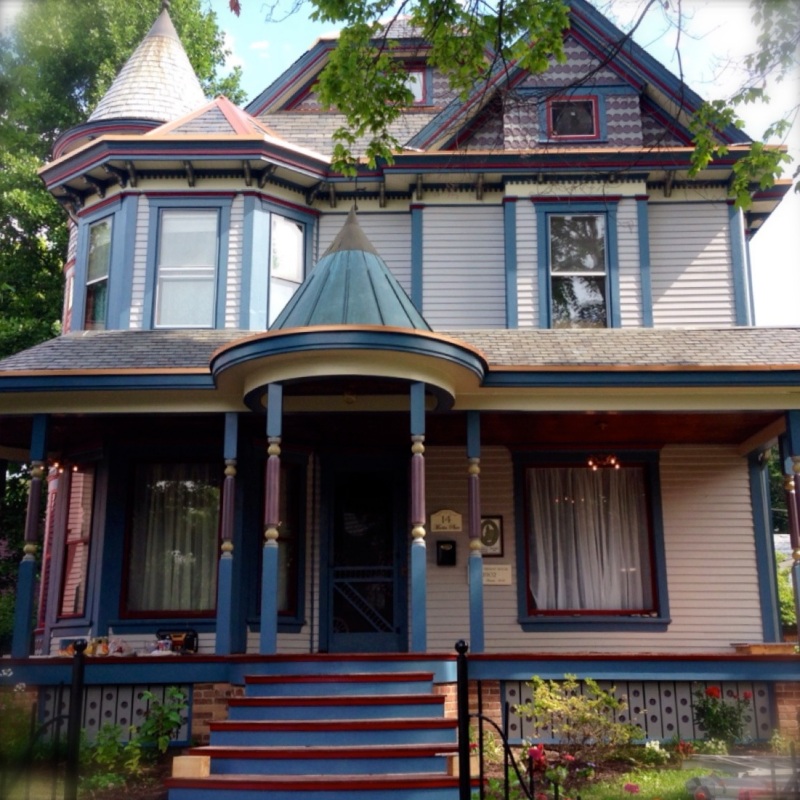 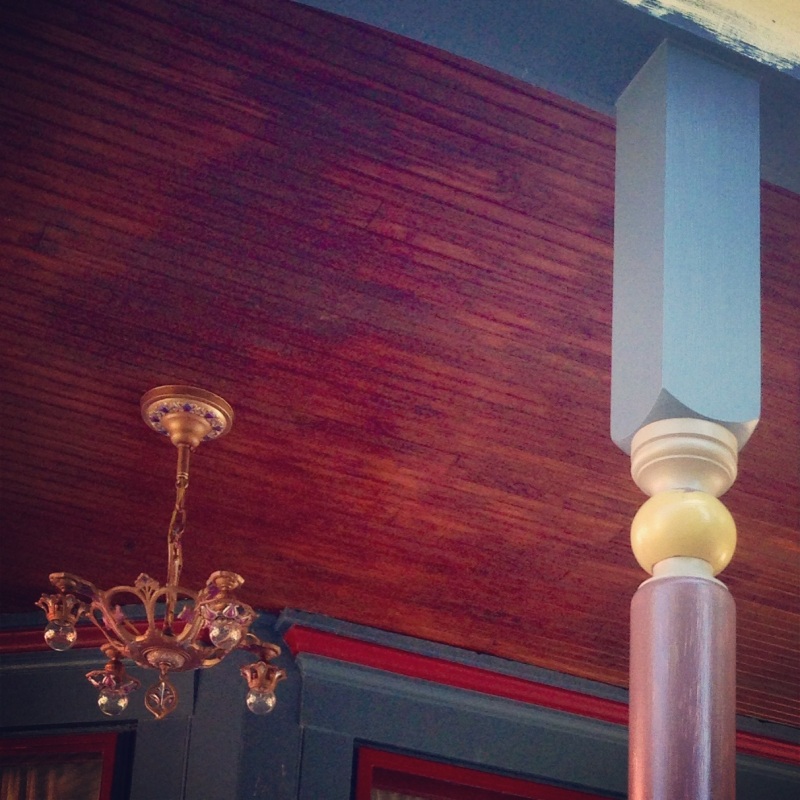 So what’s left? Some trim, and installation of the newel posts, handrail, and balusters on the steps.

And, as of today, they are PAINTED! Installation is soon! EEK! I can’t WAIT.

Your thoughts? Do you like the color choices? Which of the five would you have picked? I won’t get mad, I promise!