So, I haven’t done a blog post in about six weeks. Maybe you’ve noticed, but you probably haven’t, you’ve been as busy as us.

April and May are the busiest months for me as a band director. You’d think it would be marching season, right? Nope. Not so much. Between school, and Doug’s running (he ran a full marathon and two half-marathons in nine days!), and my work with the National Band Fraternity, Kappa Kappa Psi, I haven’t had a moment to breathe. Or, a moment to work on the house.

Working on this house that I love so much isn’t really a hobby. It’s become a part of who I am. Who WE are. I think this is pretty true with people who save houses, and it’s certainly true with me. It’s part of my soul, and when I can’t work on it, I feel like something is missing.

Even just THINKING and planning and making lists makes me happy. Hence, I’m writing this blog post that doesn’t really tell you anything, but it makes me feel a whole lot better and happier.

We installed the hardware on the pocket door for the Laundry Room. 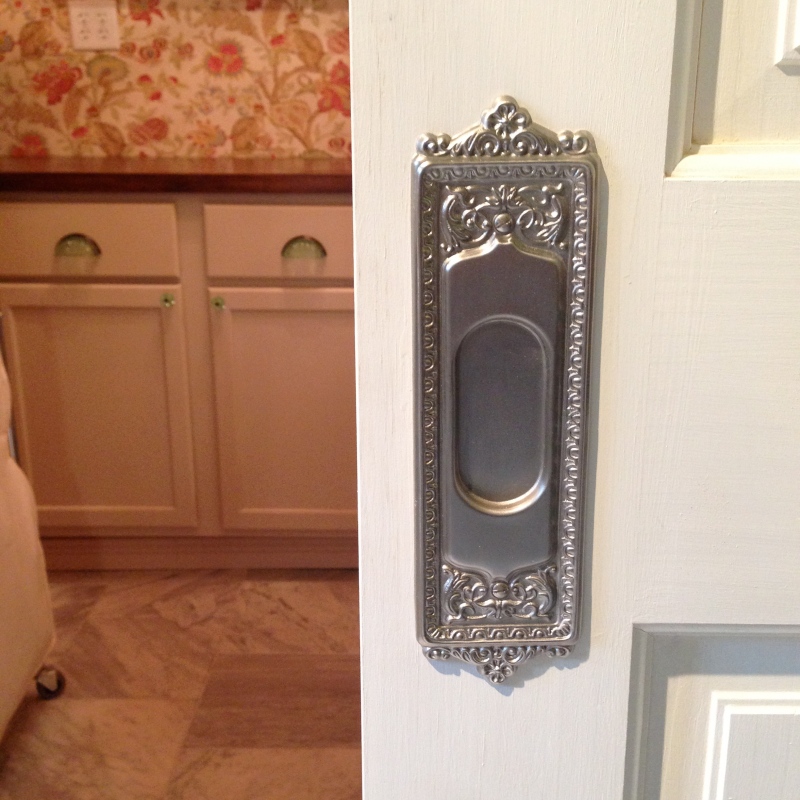 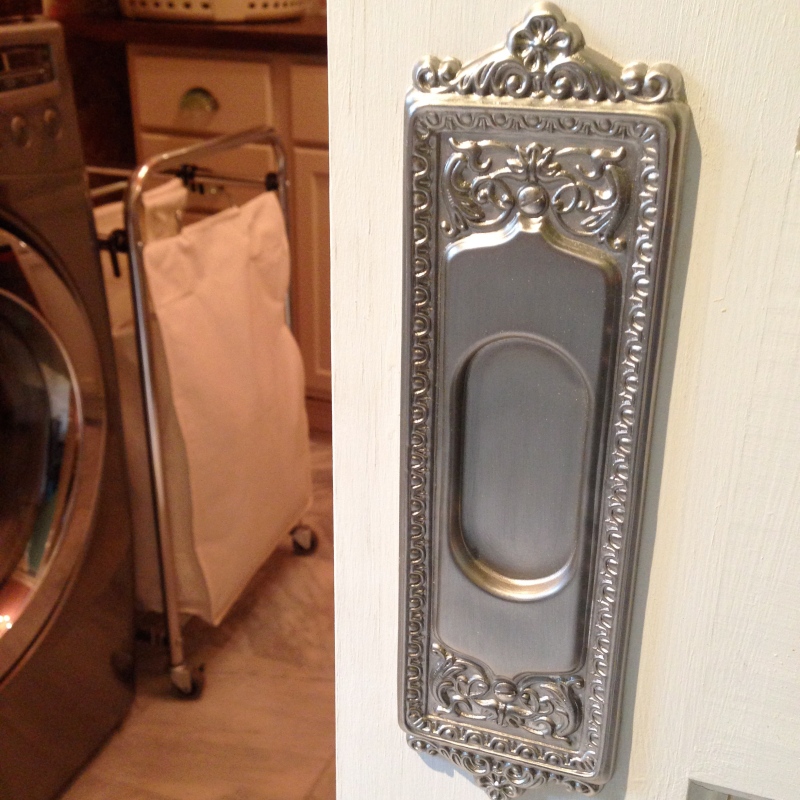 It’s lovely and important. But not a huge change.

And, theBuilt-In between the Butler’s Pantry and Kitchen? 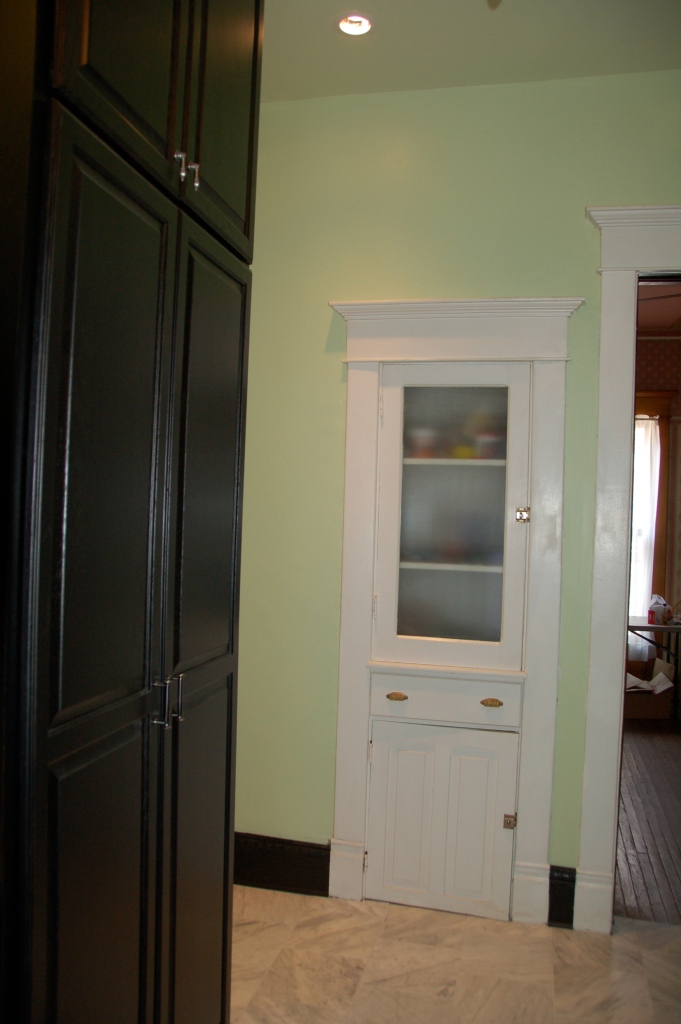 I never liked it painted white. I decided that it didn’t belong white with the door frames, but rather needed to be black with the cabinets.

See? especially with the Butler’s Pantry finished, it looks out of place. 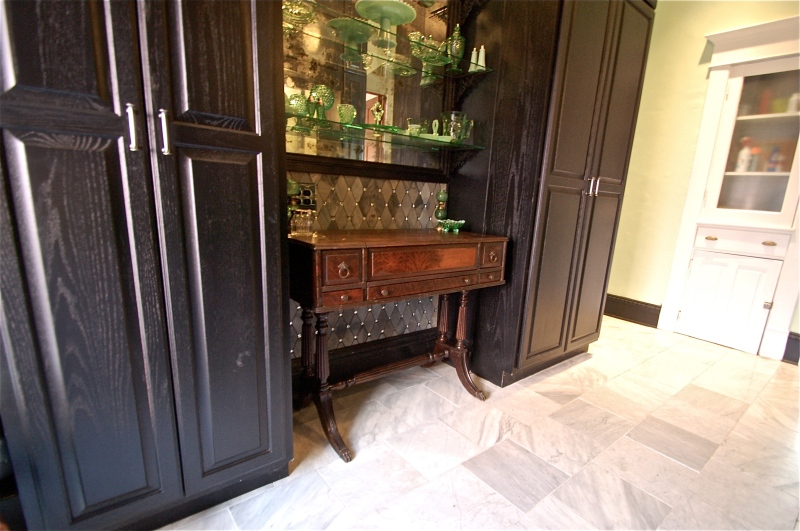 So I took off the doors – and all of these weirdo nails. 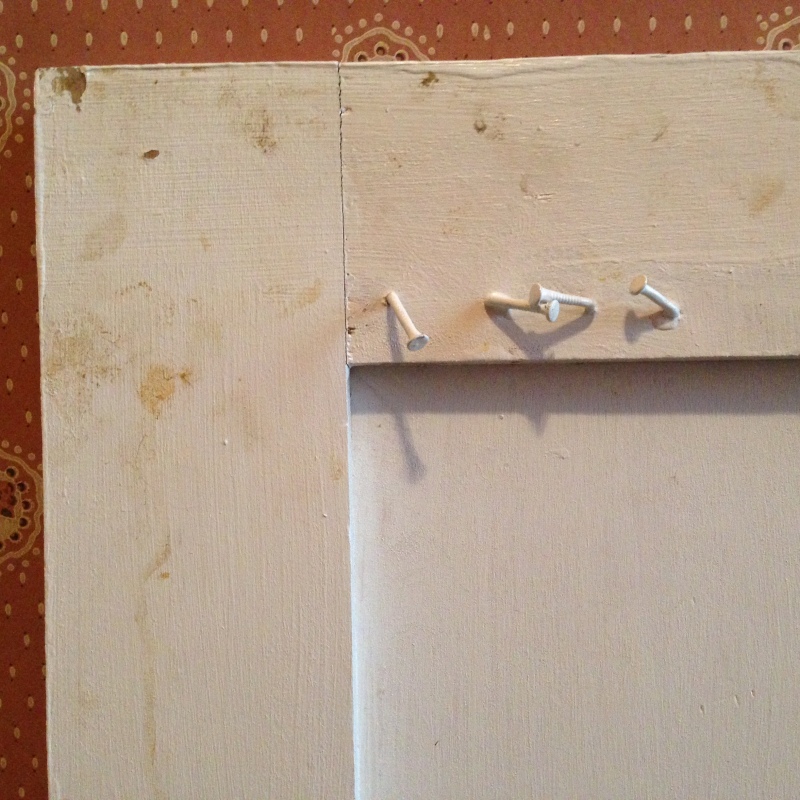 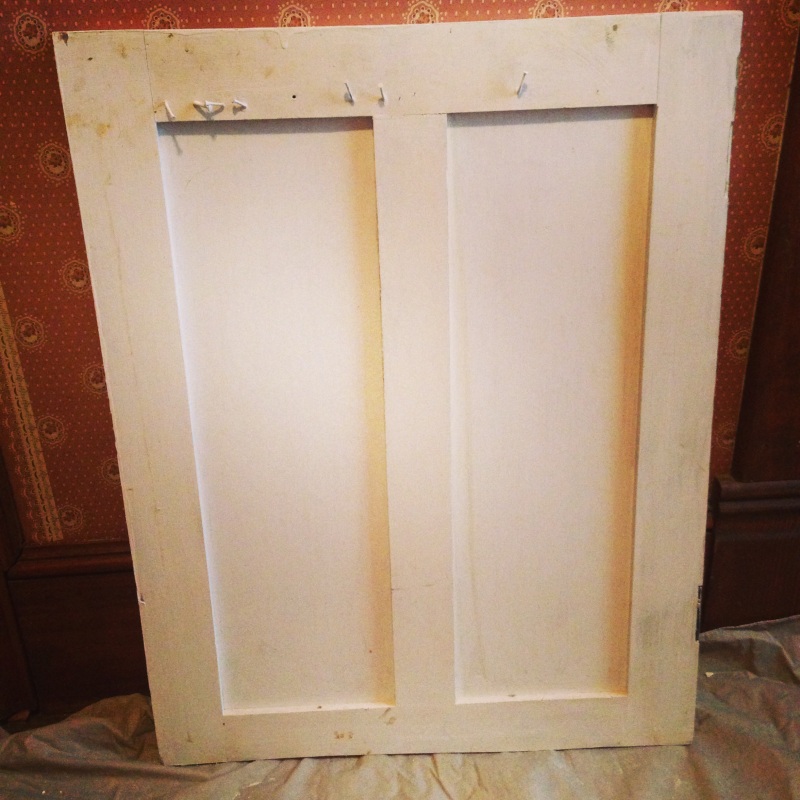 Scraped and sanded what I could…. 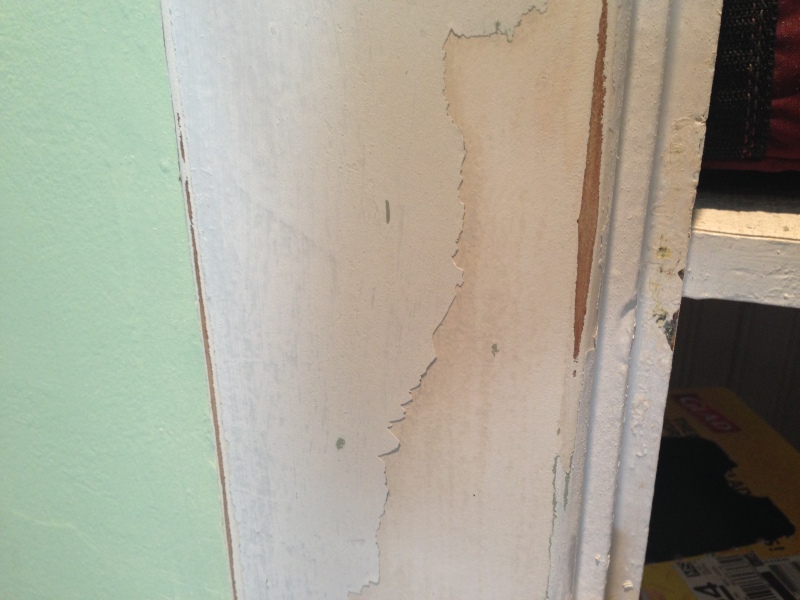 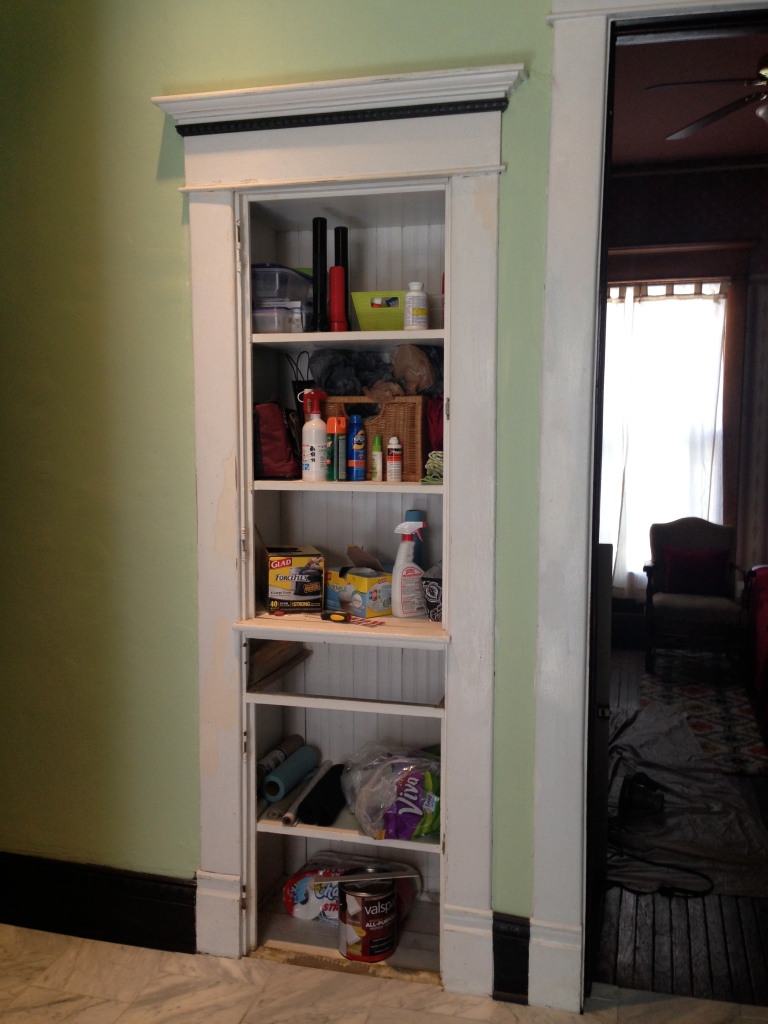 And Doug added some leftover egg-and-dart to the top. 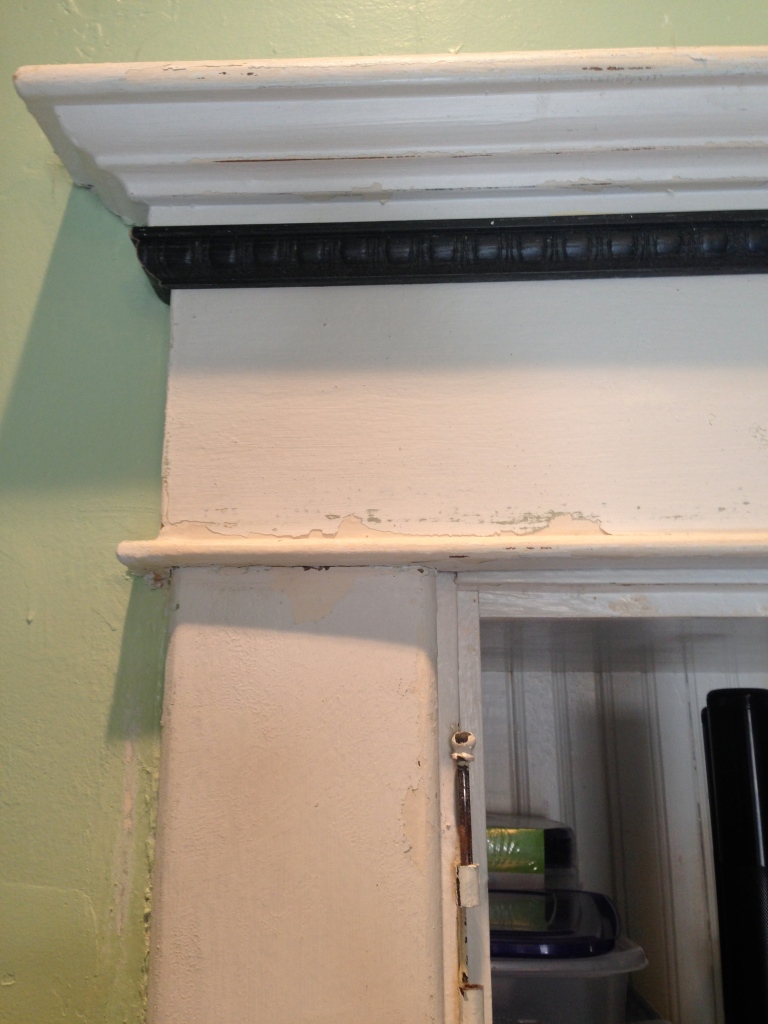 I used a tinted primer (which, really, is manna from heaven) to paint the cabinet. 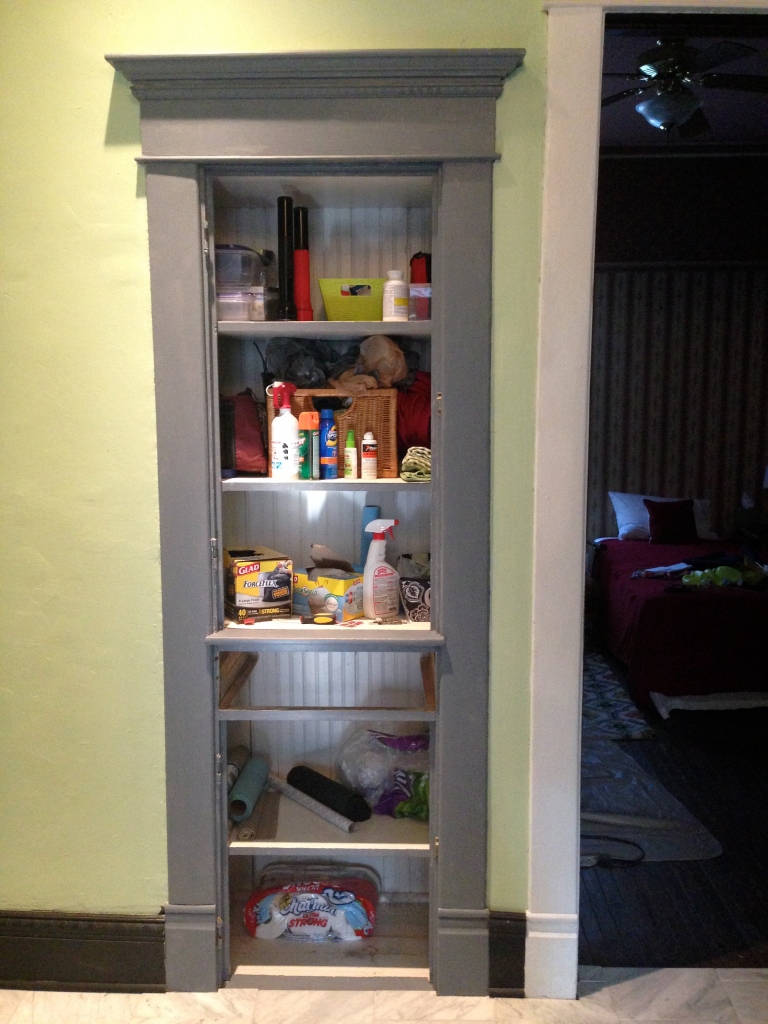 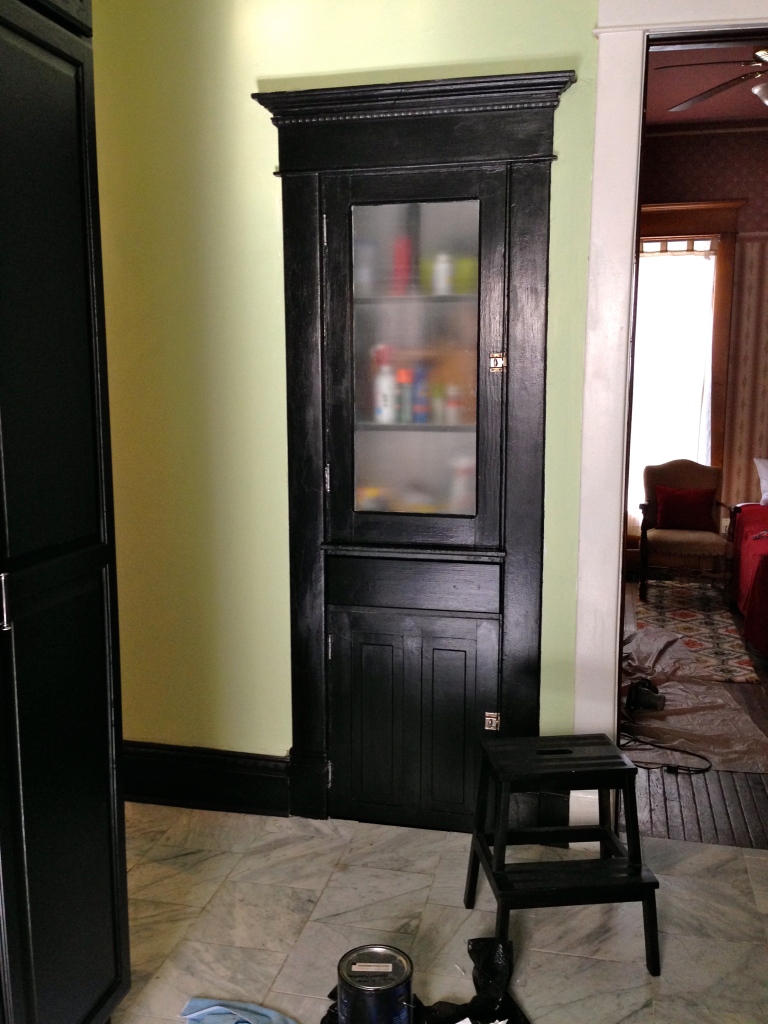 I replaced the non-original handles on the drawer with one that matched the cabinets in the kitchen. 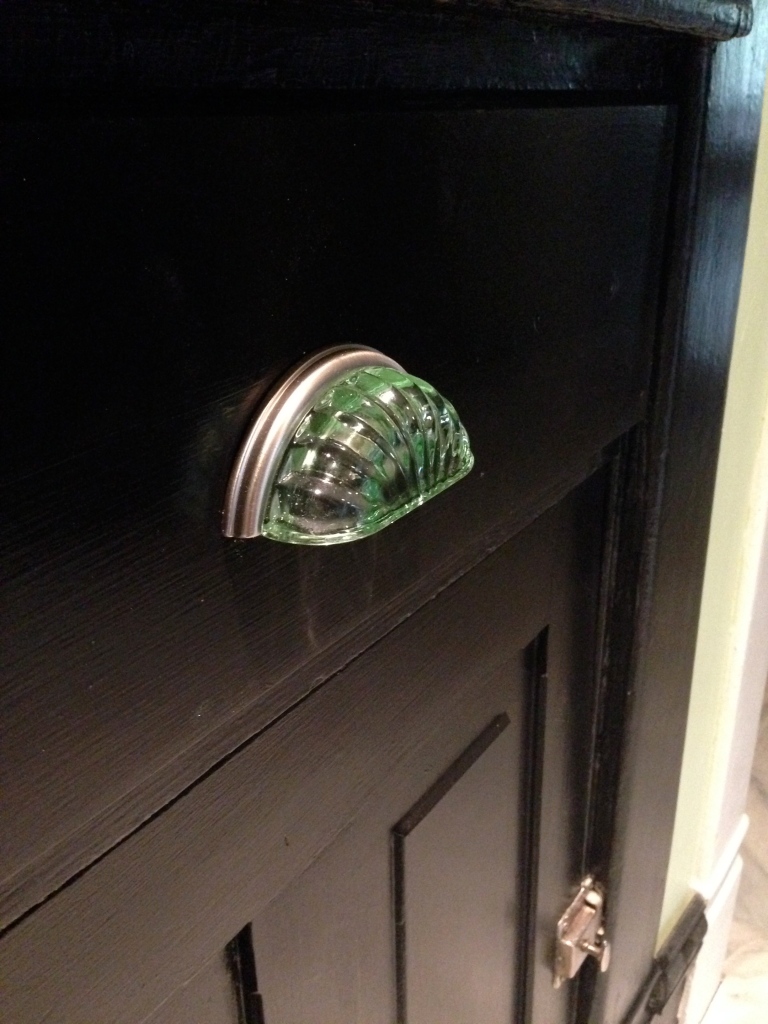 Oh yes – this was the right decision! 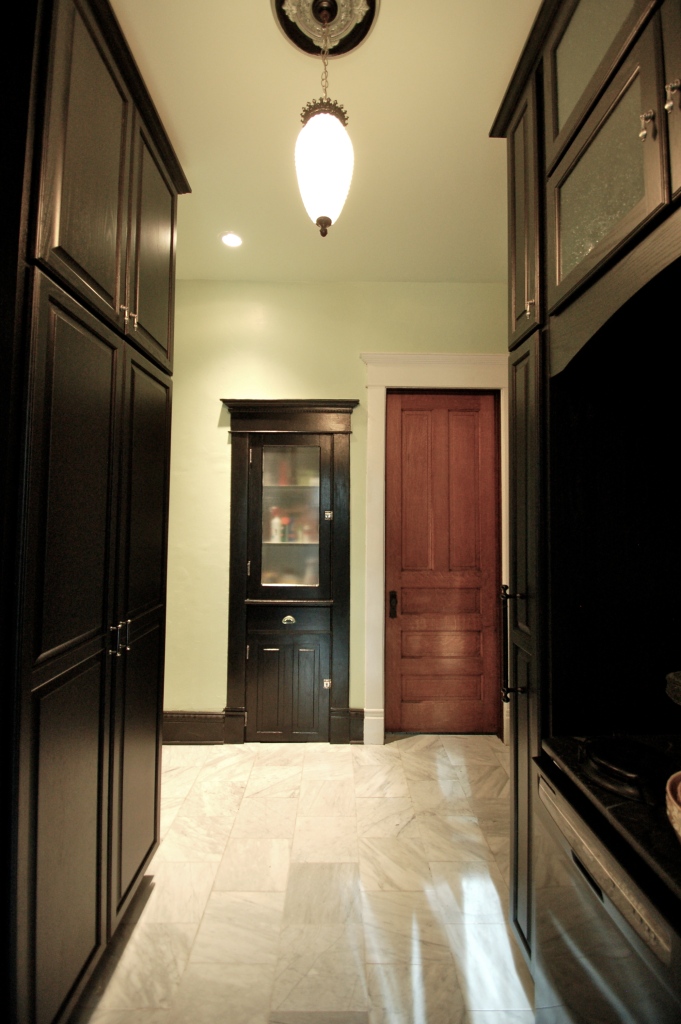 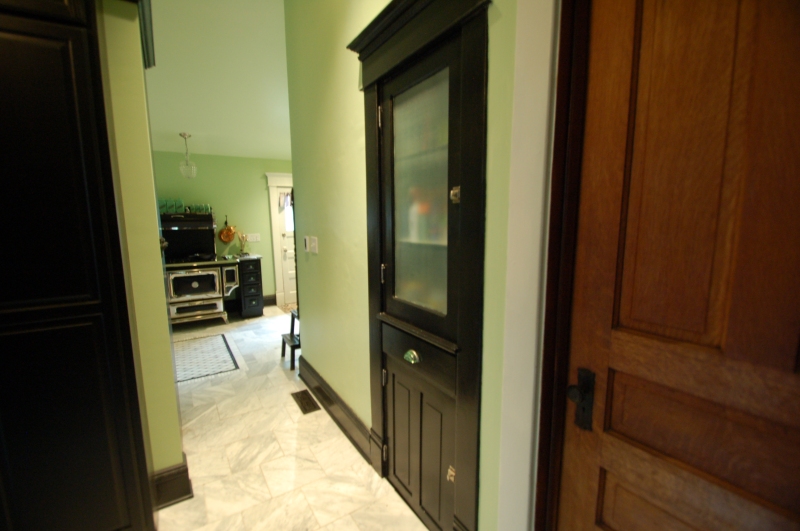 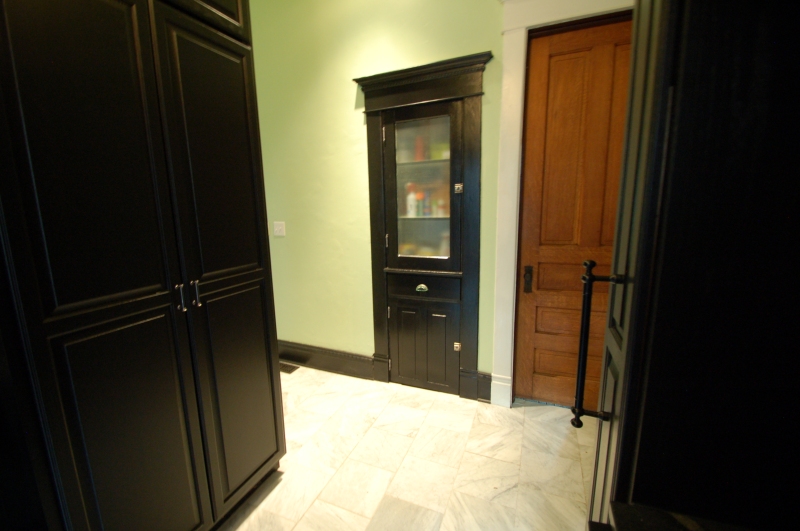 That took SIX WEEKS. It should have all taken a weekend. But, none of those were to be found. Sigh.

I’m so glad you asked. I have no idea why, but I always tend to think of projects in groups of three. I like to know what we’re doing now, what’s on deck, and what’s just around the corner.

Remember this cart that was in the Butler’s Pantry once upon a time, but now doesn’t belong there? 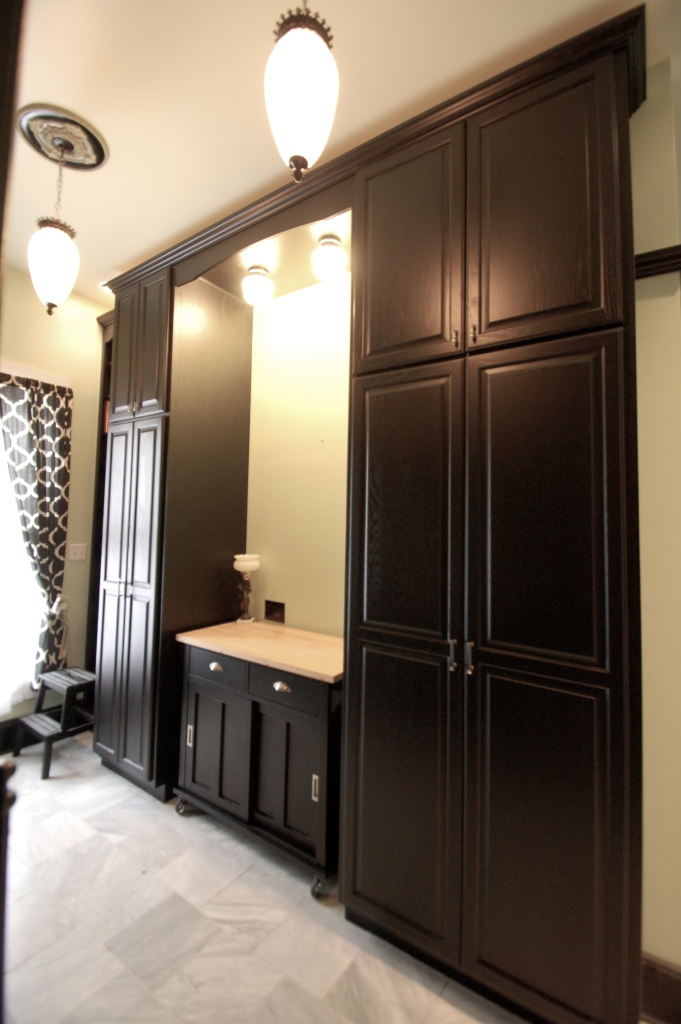 It moved into the kitchen. The cart, and this salvaged-find hutch, are going to be re-worked and married together into a beautiful union that will solve the ONLY thing I hate about my current kitchen. I’ll explain soon. 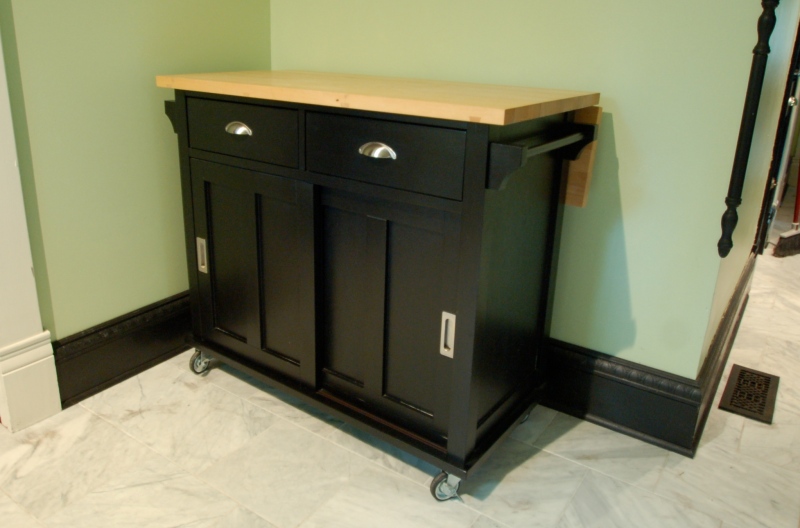 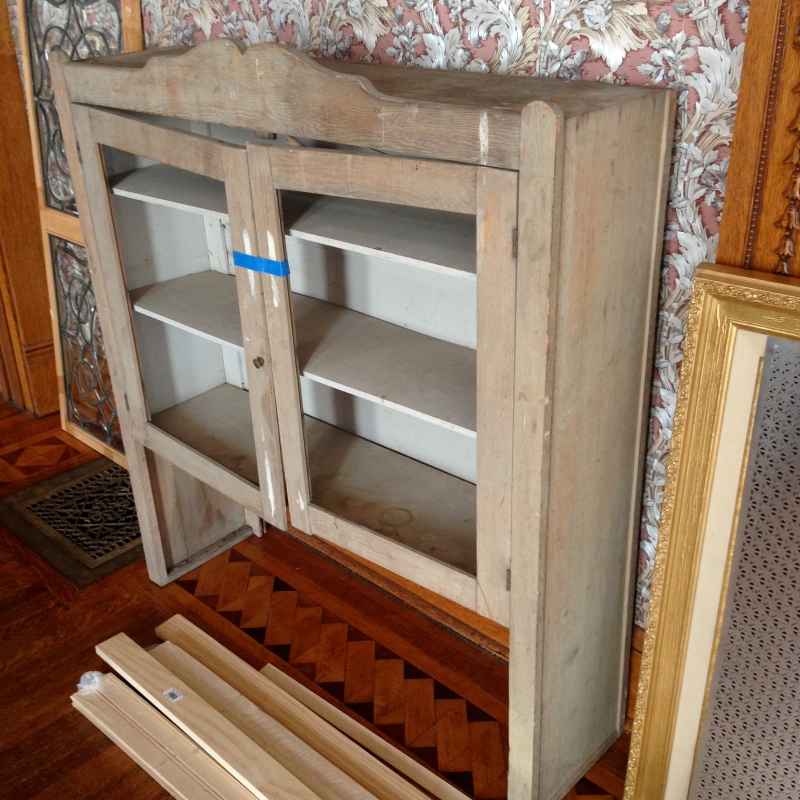 We still live on the third floor mostly, which is hotter than anything in the summer. In an attempt to creep evermore onto the first two floors, I’m going to do a mini-makeover on this bedroom. 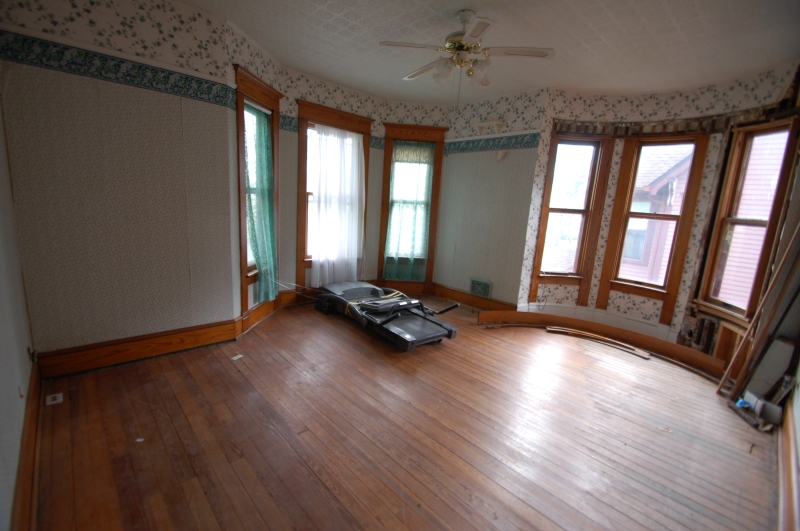 Don’t worry, the treadmill goes. I love this room so much. I love any room that’s not square. 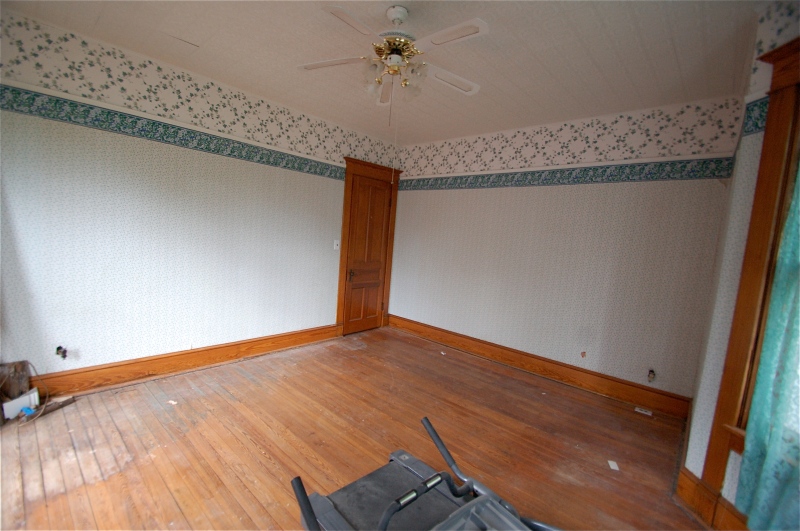 We won’t do the floors yet, or touch the ceiling. But, we will get the turret put back together after the “Turret Rot Debacle of ’14.” 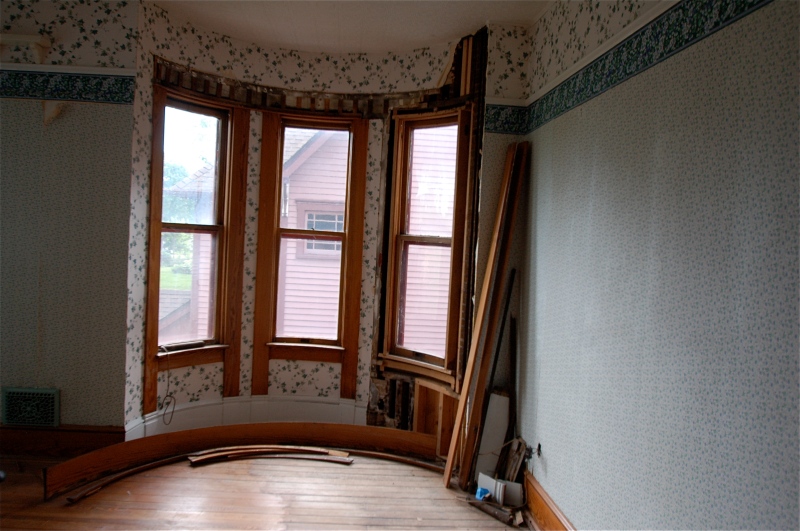 And this ceiling fan will go away, to the cheers of everyone, everywhere. 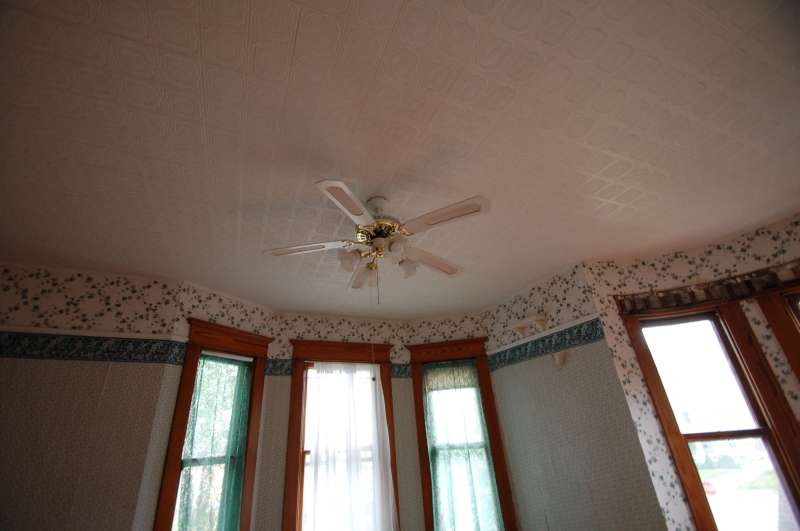 And the “Blue Strawberry” wallpaper that has given such great conversation, is going to be taken down. It’s mostly coming down on its own, anyway. To be replaced with……

I’m scared to tell you. So, I’ll just whisper it. 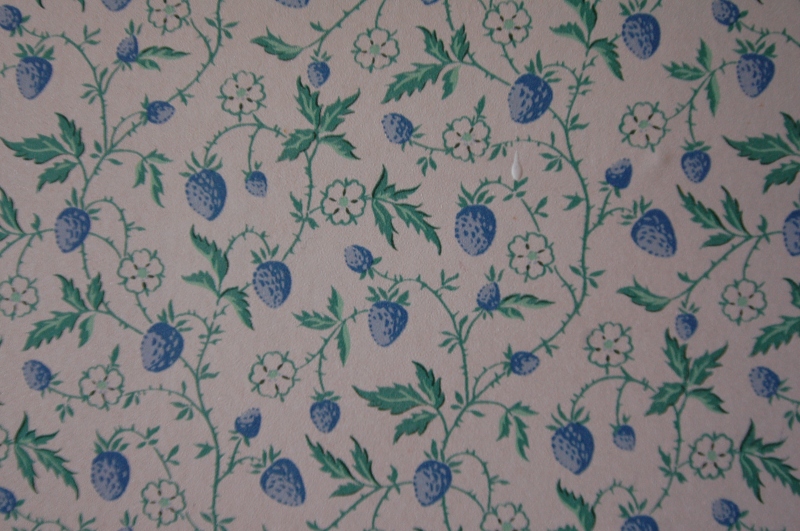 We will be working on the front parlor, and fixing all the water damage and plaster damage, including taking down this ceiling (it’s not original!) to take care of the rot, and begin to put a beautiful room back together. I have big, BIG plans for this room. Including trying to film some of the restoration to show you. We’ll see how that works out. And I’m going to buy a hardhat!!!! 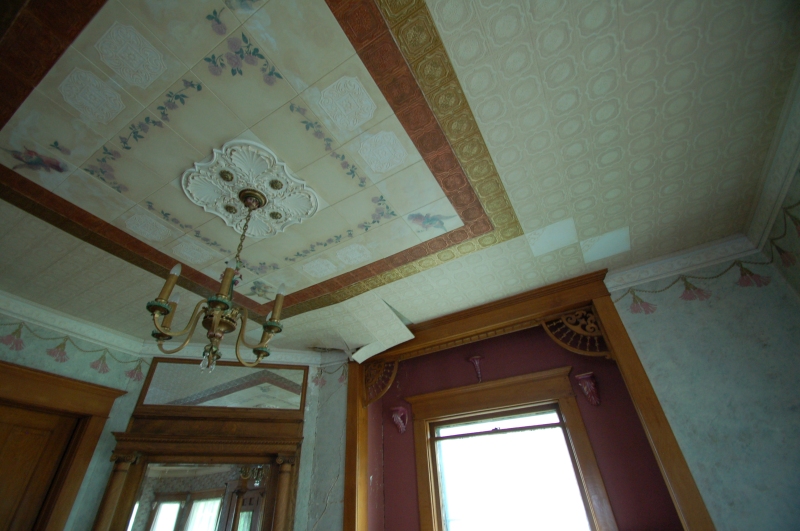 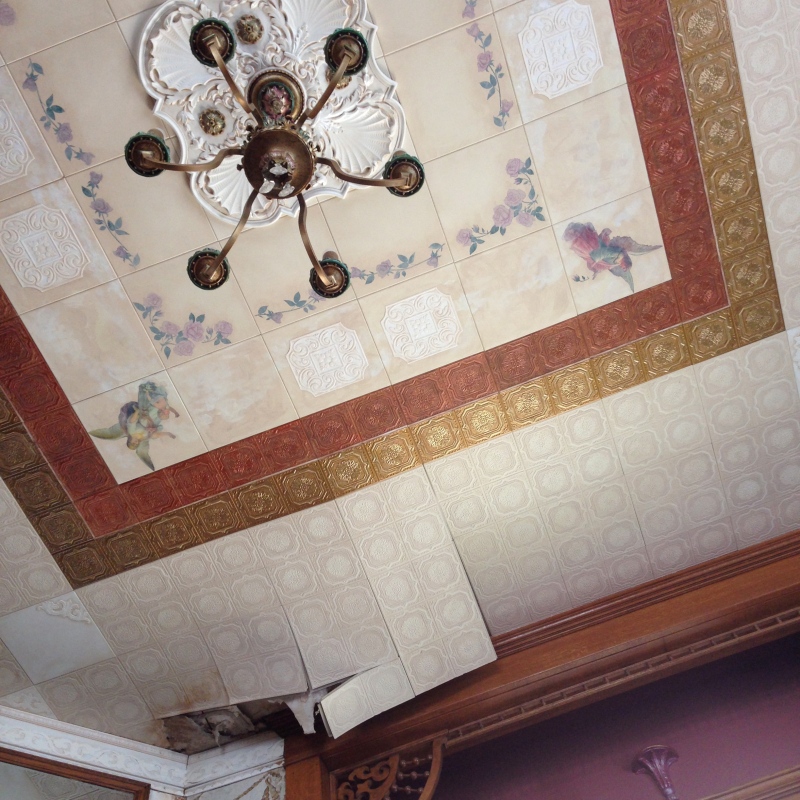 That’s where we are! It’s nice to write again. And after a couple weeks of amazing performances by amazing students and graduations and parades and banquets and awards and finals and zillions of other things, I’ll be able to write some more.