Old House rooms are weird. They really are. Especially in Queen Annes, because NOTHING is square.  There are turrets and bays and it’s ridiculous. And that is one of the BEST things about them. If I wrote a sonnet to my house, one of the top five reasons I would be in love with it, is the lack of square rooms.

Here’s the other thing about old houses : the windows are ginormous. Again, not a complaint – it’s pretty amazing. Where it gets challenging is furniture placement. For me, it’s one of the best puzzles about putting a room together. Some people like Rubik’s or Sudoku – I like Victorian Furniture arranging.

This bedroom that we’re working on – from a layout standpoint – is the WORST. From an Amy standpoint, it’s phenomenal. Here are some old pictures of the room in progress to show you what I mean.

A bay window! And a turret! SIX giant windows! There are really only two walls in this room – the one to the right of this picture….. 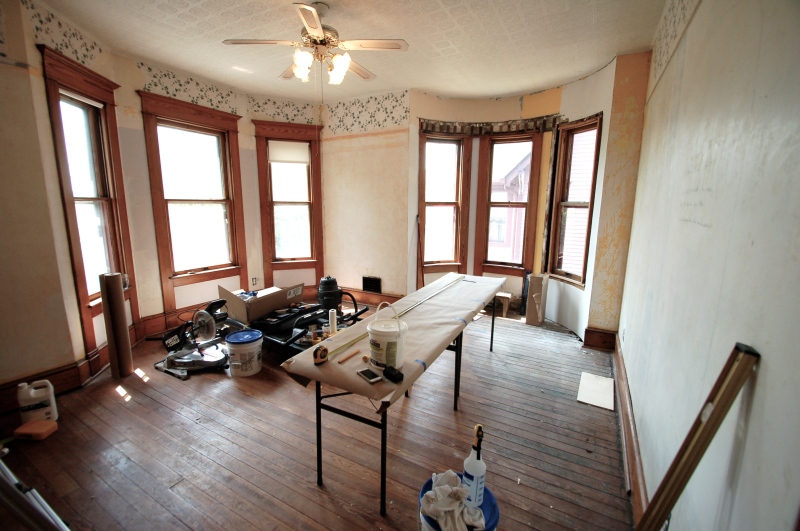 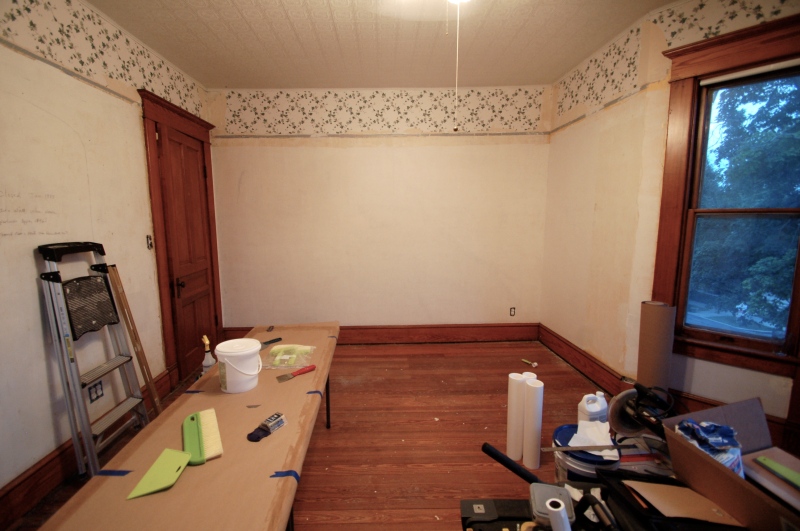 This room is going to function as our master (for now), and a guest room eventually. And no closet. In my brain, you need a wall for a wardrobe (to hang up clothes), a wall for a bed, and a wall for a dresser or some other type of furniture. We toyed with the idea of putting the bed in the bay window, but measurement-wise, it just wasn’t going to work. So, we needed three things on two walls. I thought putting a wardrobe on a wall with the dresser would look lopsided. And then I thought about scrapping the dresser altogether (but I had already picked up a cute dresser at the salvage yard that needed a home). Finally, after much pondering, I sketched this:

For a super quick recap: 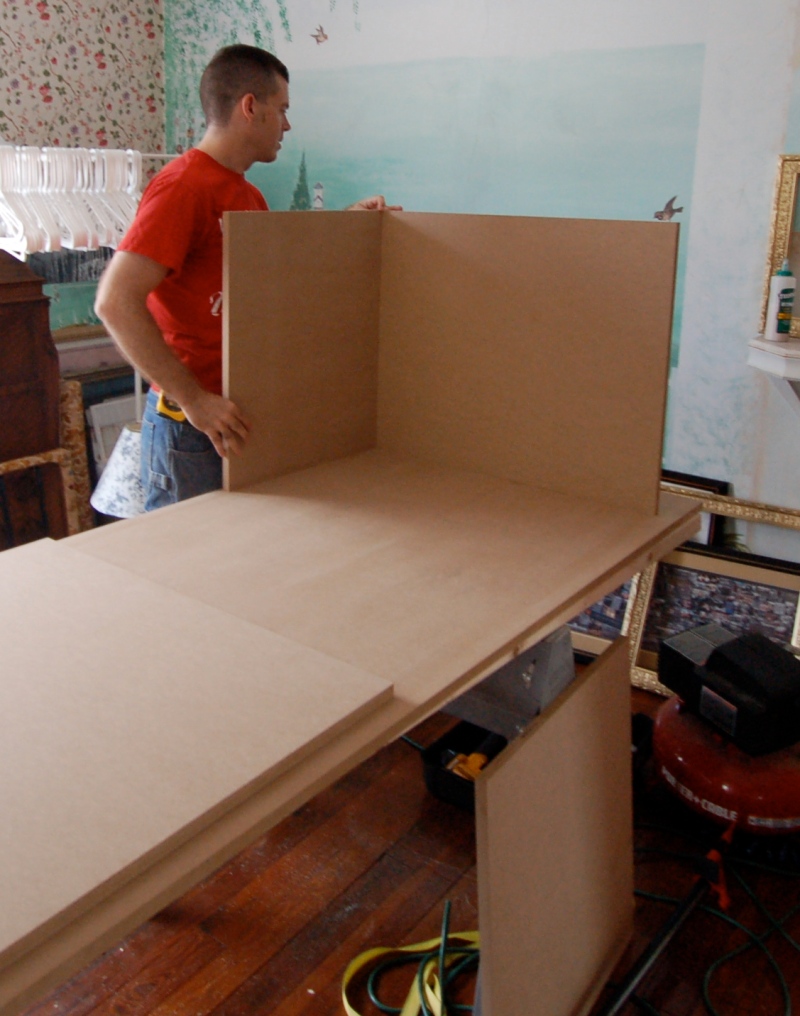 And stacked them on top of each other! 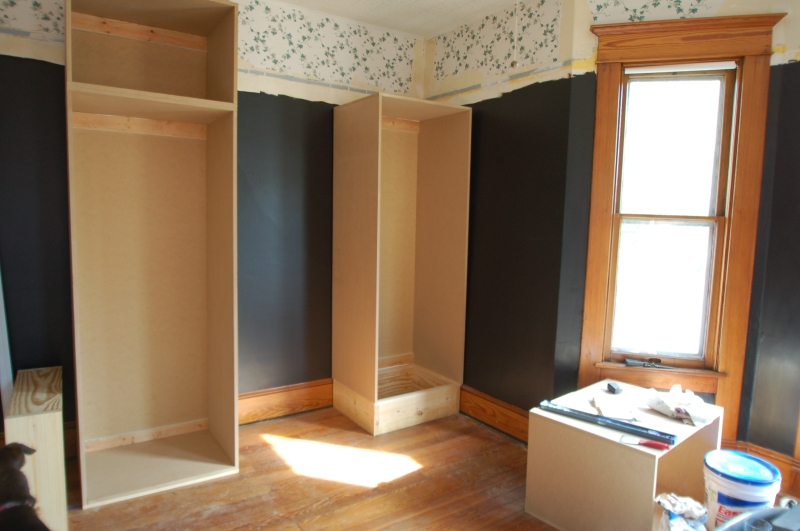 And put a bridge between!

And I painted them!

And we built doors out of antique picture frames! 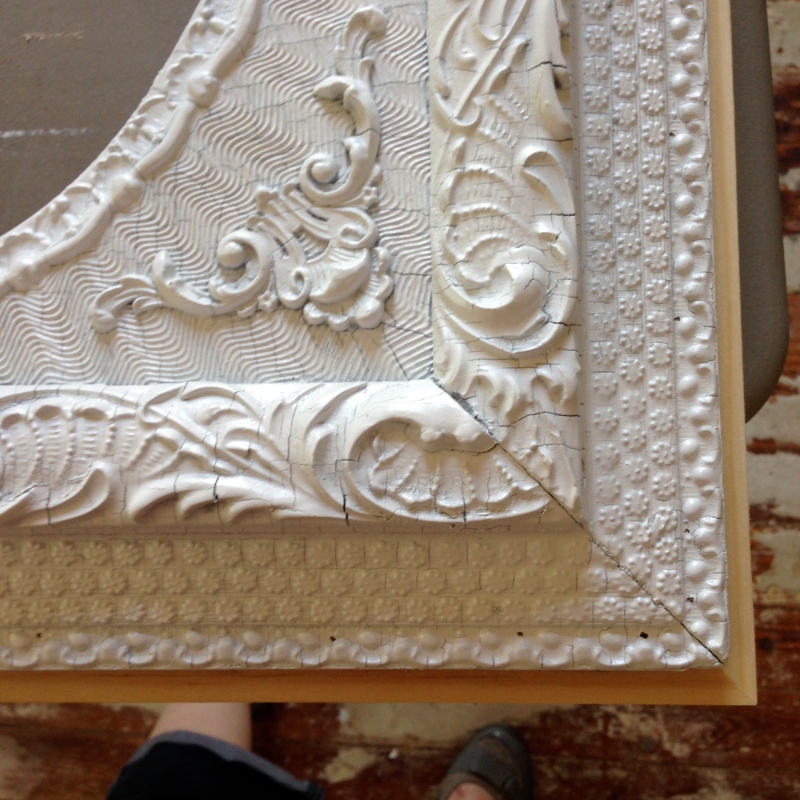 The frames we found at Small Town Salvage. So great.

And we added a light! 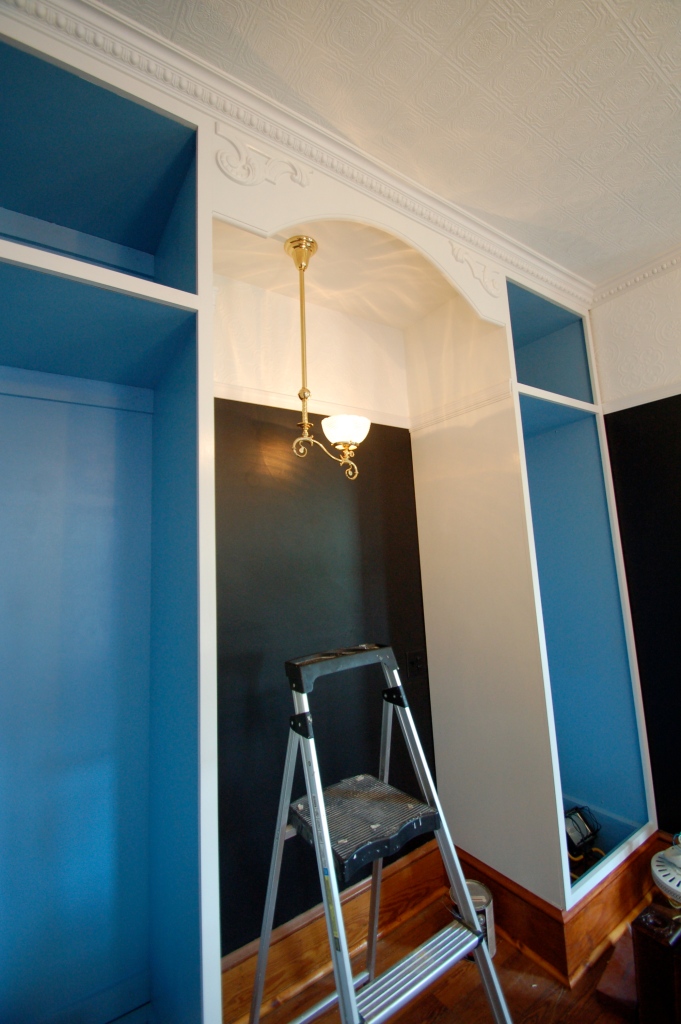 Okay. We’re caught up. That makes it seem like it wasn’t an eternity to build these.

The next step was to build the closet interiors – some shelves, and curtain rods.

The rod holders look like ghosts. Seriously. They seem surprised that this project is nearing an end. I’m right there with you, Casper.

Next : Doors! They are giant.

First, the center of the hinge hole is marked with a jig.

Here’s the hinge, and the bit that drills out the hole. 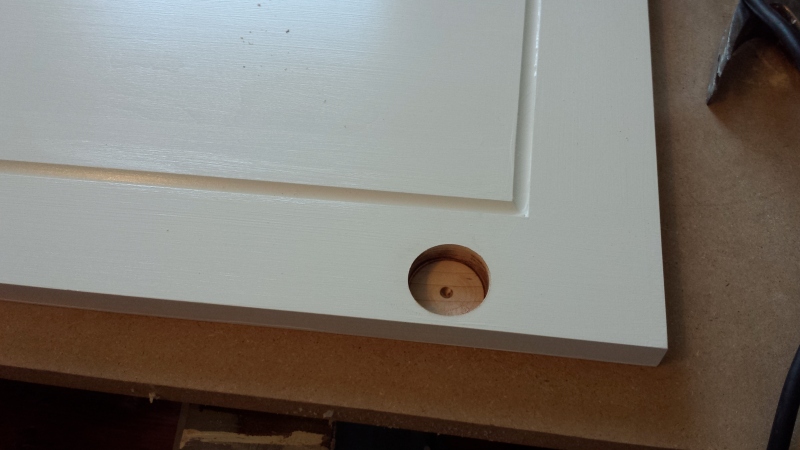 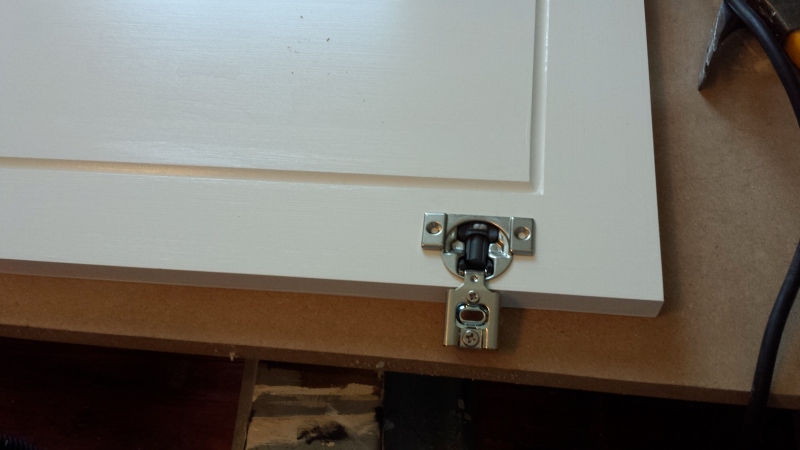 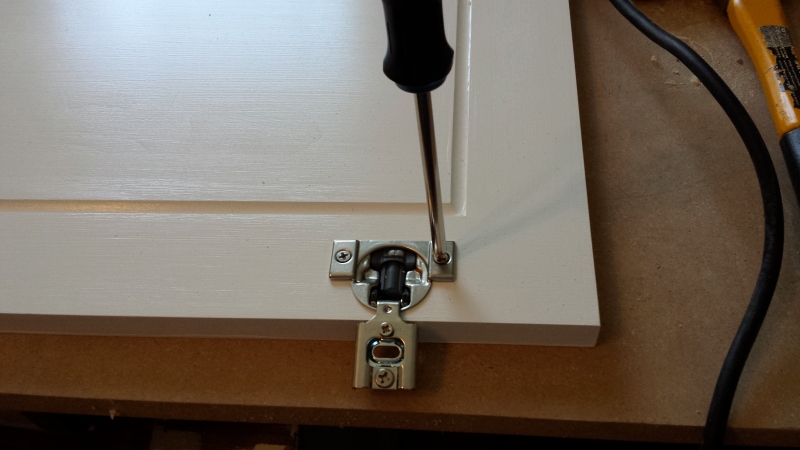 And, repeat. Four hinges on each lower door, three on the uppers.

Hanging them up, Doug clamped a board as a rail, to ensure that each door was the same height. I held the door, and he hung them up.

Next up : the mirrored doors, which we needed the scaffolding for. Not kidding, once the first one was up, I stepped back to look at it, and started crying. It’s been a long time coming. And a long couple of weeks. You can also see that the room is getting darker (it was late).

So by the time both doors were up, I got an evening shot. I absolutely love how this turned out, and I’m so proud of it. Doug figured out exactly what to do to make this look perfect. And it’s amazing.

INSIDE, there’s some good space behind the baseboards above the floor. 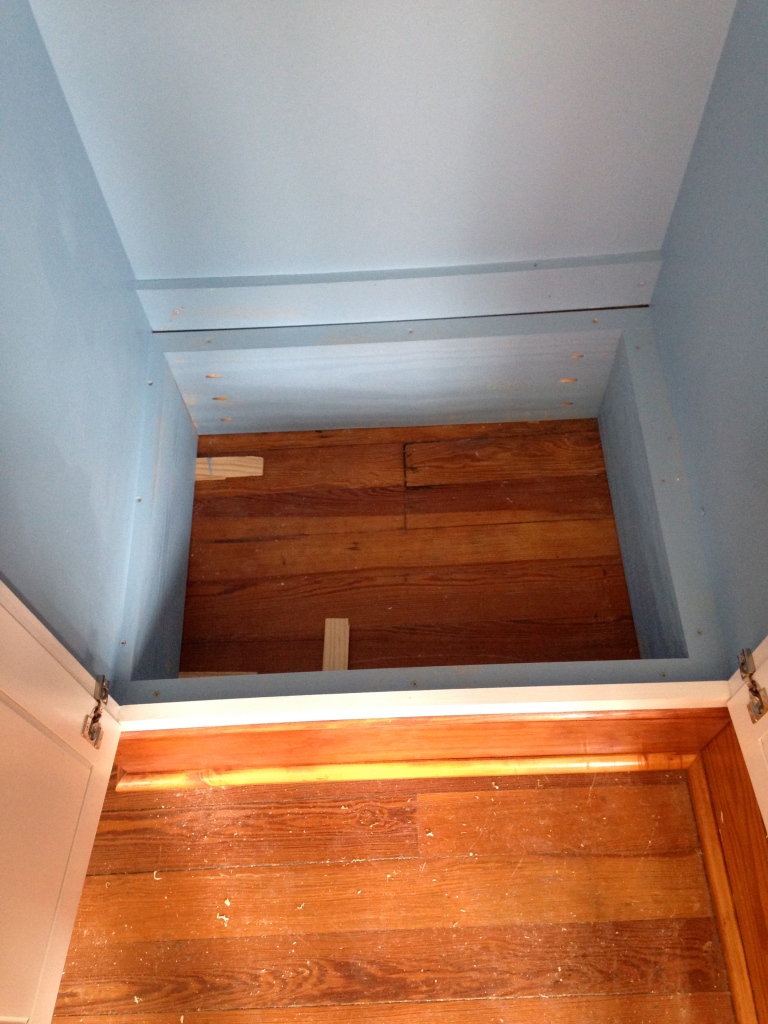 I dug in my “drawer of leftover hardware” and found some homeless knobs….

….and now we have SECRET storage underneath! 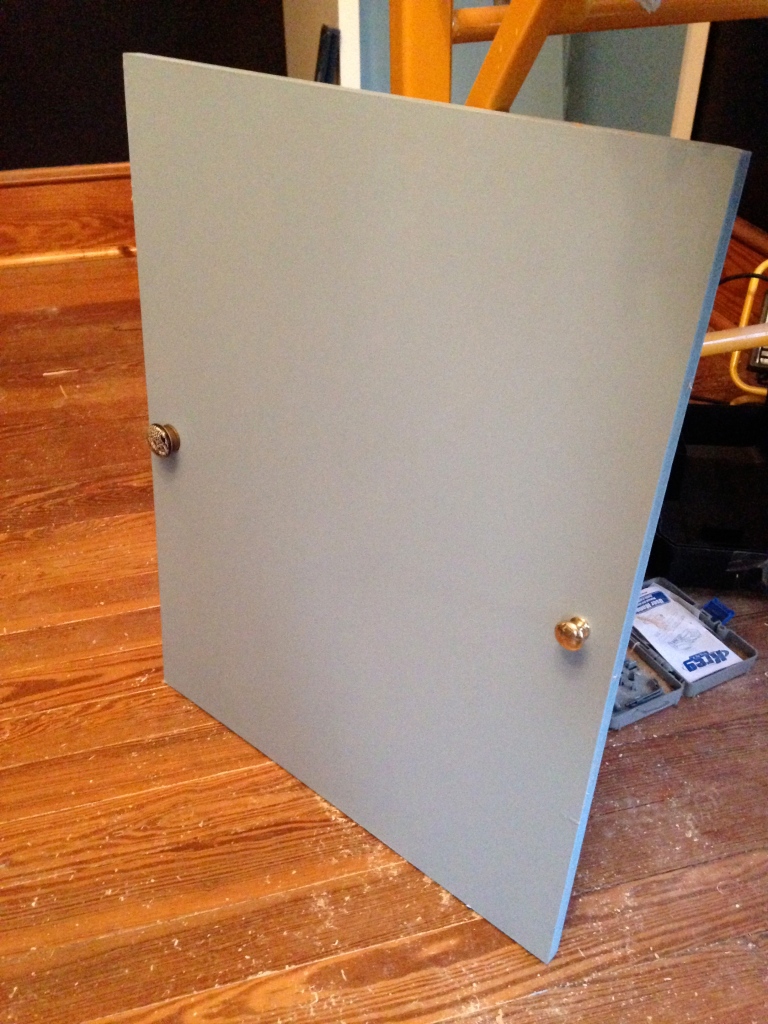 So cool. I predict this will become a time capsule that never actually gets opened. Please send your suggestions for additions post haste!!!

Are you ready? Here it is. 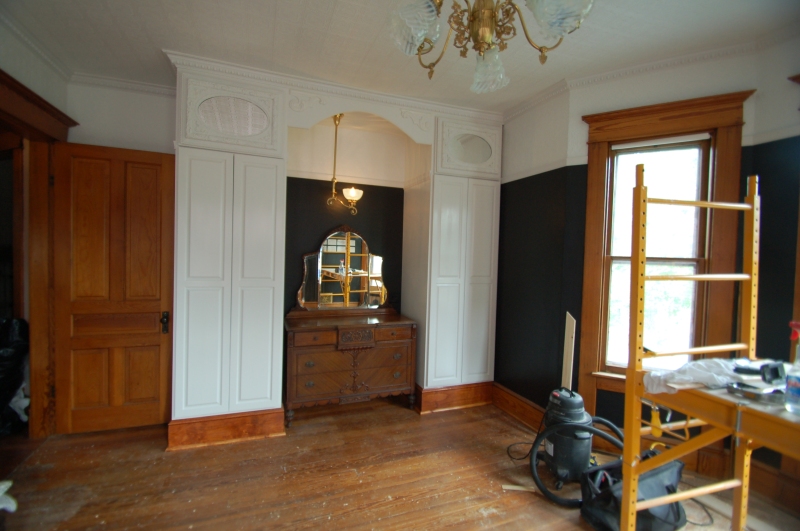 Obligatory “Amy in the mirror” shot. (Fun fact – the light switch for the pendant and an outlet are on the wall to the right of the mirror, but they’re black, so you CAN’T SEE THEM!)

And then I got annoyed that the scaffolding was in the picture. And since WE DON’T NEED IT IN THERE ANYMORE (rejoice!), we moved it out. 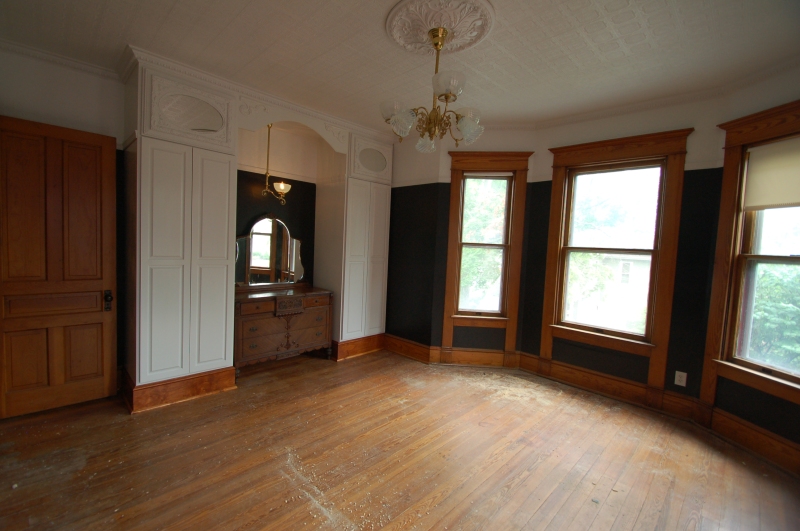 And here’s the wall for the bed!

Doug’s amazing realization of it.

The dresser came from Madison Street Salvage (as did the center light, sans globes). A few more pieces from there will find their way in before it’s done!

A closer look at the upper doors, made from frames from Small Town Salvage.

I’m waiting for my handles to come in for the doors. Of course, once I ordered them I found out they were back-ordered. So I’ll post those when they’re here!!!

Also – flood clean-up is going well. Not much rest is happening here, but school starts next week, and we need the house and many of the rooms to host my band staff for band camp! We’re doing well with all of it, and I hope this bedroom finishes for real – very soon. Because I’m ready to move in. 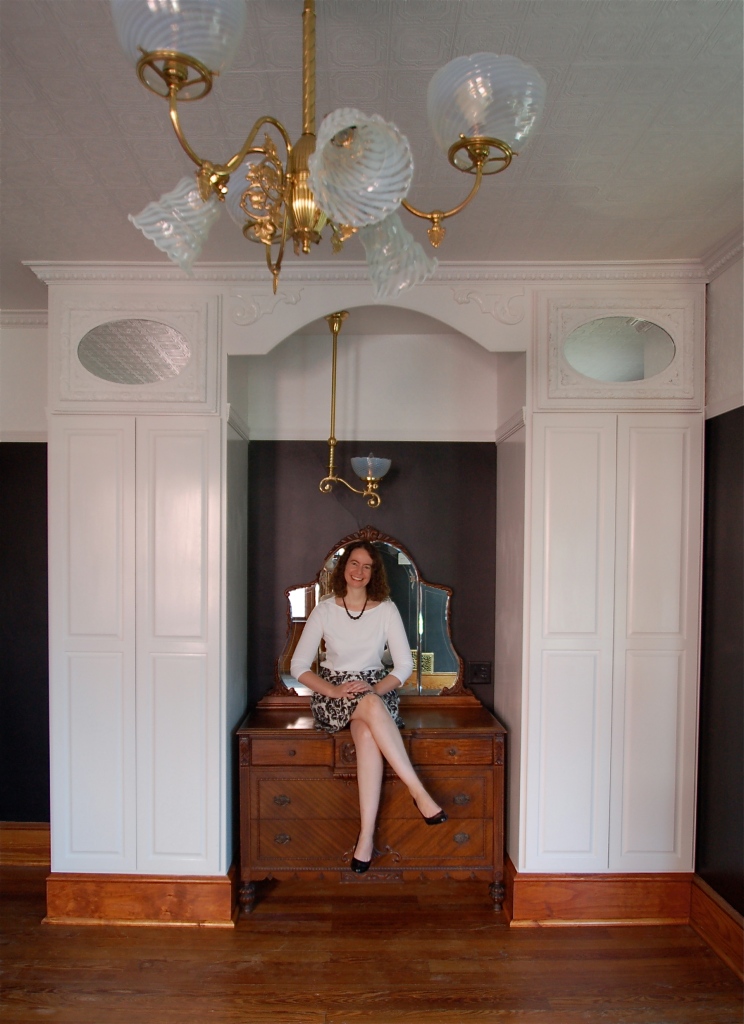 This house put up a new free library (out of a wine fridge?) with a school desk and they are my new favorite people.
Why yes. We did picnic for dinner to celebrate the new floors! With cast iron Mac and Cheese, and cast iron S’mores for dessert. Also, we’re not as young as we once were. Standing up was hard. 🤣 But it was delightful.
This is long and from my heart, so settle in or scroll on past. This week has been full of raw emotions, and anger, and love and hate, and support - and people just trying to find ways to help. I love the people on here, and I love the old house community. And I love my #52weeksofhome project - which was supposed to be a "Neutral" theme this week. And no one is neutral this week. Please remember that some people are bold and on fire and are passionately fighting. Some people are processing pain. Some people are taking their first baby steps into advocacy and learning, and that might be hard for them. Some people might be reading their first book on how to help, and some people might be having hard conversations with family members, and they come here to escape. I'm a teacher, and I use analogies A LOT in my band room. And I was thinking about this today, as I was taking the picture for this post. Restoring an old house is a lot like restoring relationships. What's happening in our world right now, just like an old house, isn't going to be an easy fix. You have to work at it. You might look at something and think it's destroyed, and not capable of beauty again, but if you have vision and persistence and patience, it CAN get better. It might not always be perfect (it won't). When we replaced our porch steps 6 years ago, they were AMAZING. And now? One has rotted and we need to fix it. Just like houses, our relationships and communities need constant work and upkeep. It can't just be today, tomorrow, this week. And you might finish one room, but the whole rest of the house is falling down. Making one thing better is great - but there are so many things that we need to fix. And not one of us can do it alone. We all have different talents to add - some of need to hire plumbers or carpenters. We couldn't do the floors alone, so we needed help, and we trusted other people to handle what we couldn't. If you feel overwhelmed about the world, that's good - you can find growth and purpose in that. Find your niche. You can't do everything, and you don't know what others are doing outside the squares - and that's okay. (Continued in comments)
We tried. Photo shoots during lunchtime walks are hard. #dogsofinstagram #dogstagram
#blackouttuesday
New blog post up, on the incredible work done by Virtuoso Hardwoods to restore the border inlay in the Entrance Hall. Swipe-able Link in stories and highlights! Lots of details on matching new to old wood (and a mesmerizing video!). My goal for today was to organize pictures, make lists, and figure out everything I need to blog. And then write one post. I DID IT! So much catching up to do, and infinitely grateful to @virtuosohardwoods for documenting this process for us while we stayed socially distant!
Please. Vote. Please get involved with your communities. Please listen to your neighbors that are hurting. Please vote EVERY TIME. Please know that your local elections and down-ballot races are every bit as important presidential races, because they influence local policy and gerrymandering. We need change in so many places right now, but as I voted today I thought of how many people don’t, because primaries “aren’t important.” We need our elected officials to reflect the diversity of our country. We need to enact change in a system that was created to hold our neighbors and loved ones back. Seek out candidates looking to reflect ideals of love and change and equality. Support them. #blacklivesmatter #lovemore #vote
Evening walk.
This week’s theme for #52weeksofhome was “Shadows / Rays of Light” and I love the perspective for everyone on this. Such beautiful pictures this week. Here are some favorites, but please check out the tagged feeds for more eye candy - and look at the hashtag for more pictures from this week! When you post make sure to use the hashtag that includes the week, or it’s so hard for me to find posts. If you haven’t joined us, jump on in! We want to see your projects (and help cheer you on!). Make sure you share and tag with anyone who should join us! #52weeksofhomeweek22 🏡 Next week’s theme for Week 23 is “Neutrals” which I have been nervous about - and almost didn’t include it as a theme when someone suggested it - because it was going to be too hard for me, but it’s a CHALLENGE AMY so figure it out. 🏡 Want to jump into the photo challenge? Jump in this week, or start at the beginning (or any other week). Please make sure to tag #52weeksofhome, as well as the numbered hashtag for the week so we can all find each other's pictures easily! You can find a complete list in my feed, but I’ll also post the current and upcoming here - just swipe. It’s just for fun - a grown-up (or not) version of show-and-tell! Check out the hashtags for more pictures from some amazing homeowners.
I think this is essential, more than ever. Love more. Listen more. Have more empathy. Leave today better than yesterday and work with passion for better tomorrows. My heart is aching for the world, for my friends, for strangers. Love More.