I’m a tub girl. Utterly, totally, and completely. When Jackson Street flooded in the Midwest floods of ’08, and we went 11 (?) days without hot water while the gas was out, Doug went to the City’s gym to take a shower. I, meanwhile, warmed up water in our giant soup roasters, poured it in the clawfoot, and took baths, using a pitcher to wash and rinse my hair. That was about as long as I could go authentic Victorian, but I really do love a bath. And clawfoots are the best. Seriously. They are deep, and have the most comfortable backs, hold their temperature FOREVER, and they are so sculptural.

I get why people would renovate a bathroom and just put a giant shower in, and no tub. But I am NOT ONE OF THOSE PEOPLE. Our last two houses had clawfoots, and the fact that this one didn’t, after years of remodels and remuddles, has always made me sad.

Currently? We own 3 clawfoots. And none of them are installed. They are just waiting.

This one sat outside and held drinks at parties! 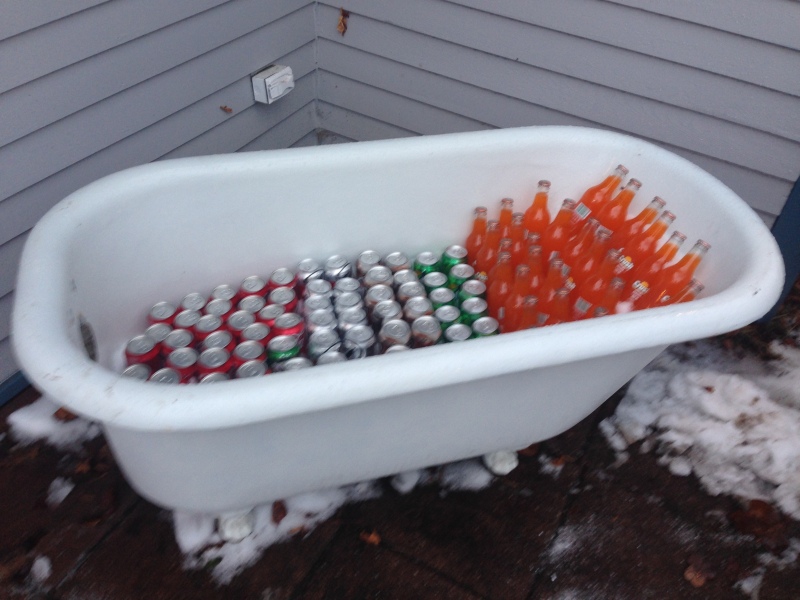 But after a couple of years as the soda jerk, we brought it inside. 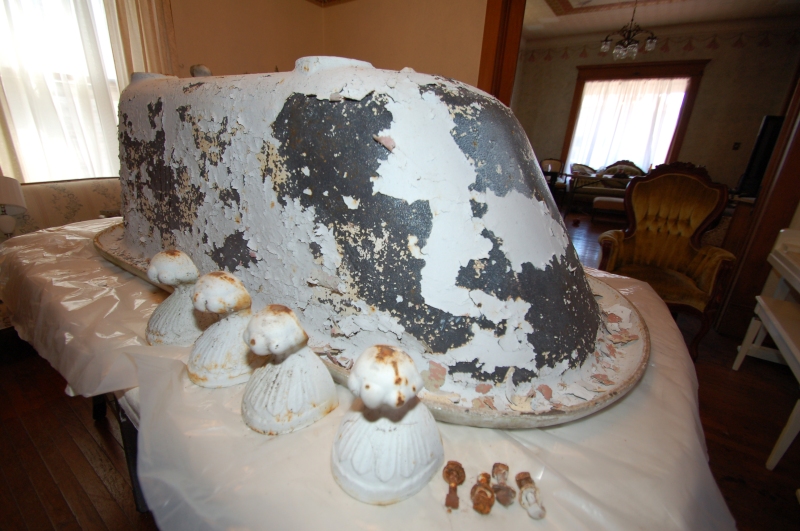 Doug and Edgar got it up on a table for me, because I wanted to work on it standing up. Somehow, they were buff enough to make it look mostly easy. I’m only doing the outside – we’ll hire someone to reglaze the inside who has all the right equipment. This was a Craigslist for $100 find, from a house in the neighborhood.

Being outside for a while loosened up the paint a lot. And made it rustier, too, so it’s not a recommended treatment. But I’m already thinking about how to build something outside so I can keep a drink tub forever outside….

Step One! Scrape the loose paint.

Step Two! Give Doug the feet.

Doug collects and restores cast iron cookware, which is really delicious. He has his own electrolysis tank and everything! I had to get his help on explaining this.

Amy’s Version : Doug takes cast iron to the basement. While down there, he says a spell, and there is sorcery and witch-craft and someone sells their soul and all the rust and paint is gone.

Doug’s Version : “Electrolysis can break down just about anything that is bonded to iron, including rust, paint, and various other crud that builds up over time.  It’s very similar to the process for chrome plating, but in reverse.  Chrome plating takes the chrome and bonds it to the iron to give it a shiny, protective finish.  With electrolysis cleaning, we run the electricity in the opposite direction, and instead of bonding something to the iron, it breaks existing bonds…and in our case, the paint just peels off in sheets.

In simplistic terms, electrolysis is a trading of materials through the passing of electricity.  So you have a sacrificial anode of some sort that will wear away as part of the cleaning process, and will trade some of its material to the piece you’re cleaning as it also collects some of the rust and dirt and such that you’re cleaning off your good piece.  There are various choices for your sacrificial anode, but I use graphite sheets for my setup.  Graphite has the advantage of keeping the tank cleaner because it doesn’t collect rust, and it only imparts a black film to the piece you’re cleaning.  That black film can then be scrubbed off in the sink after you’re done cleaning.”

Okay, Science Guy. Why can’t we just put it in the stripping crockpot, like we’ve done for hardware and other things?

Doug : “The first answer is that we already have it set up in our basement cause I’m a crazy collector.  But in my understanding, the crock pot method uses soaking and a bit of heat to loosen the paint, and you scrub to get the rest off in between soaks.  Electrolysis is acting from the iron out, rather than the crock pot method of working from the paint inwards.  Electrolysis is literally removing the bond to the iron, and it will work in all the crevices and details of whatever you’re cleaning…so it’s especially good for detailed pieces.  It’s also most a set and forget process.  You certainly can get the piece out and scrub it in between sessions to speed things up, but you don’t have to…once you start, it will finish the paint removal all on its own given time.”

So, there you go! More on that later…. they need time to soak.

After I got off the loose paint,  I used soygel to strip the rest off. I tried using a heat gun, but it really didn’t work in this application. And I really went all out – I certainly didn’t NEED the tub to be completely stripped. But I did it, anyway.

It’s as satisfying as peeling off a sunburn.

The biggest thing with using a stripper is to give it time to work. Since Soygel doesn’t have fumes and isn’t toxic, I would put it on before bed, and let it soak all night.

Cover it with plastic sheeting so it doesn’t dry out. 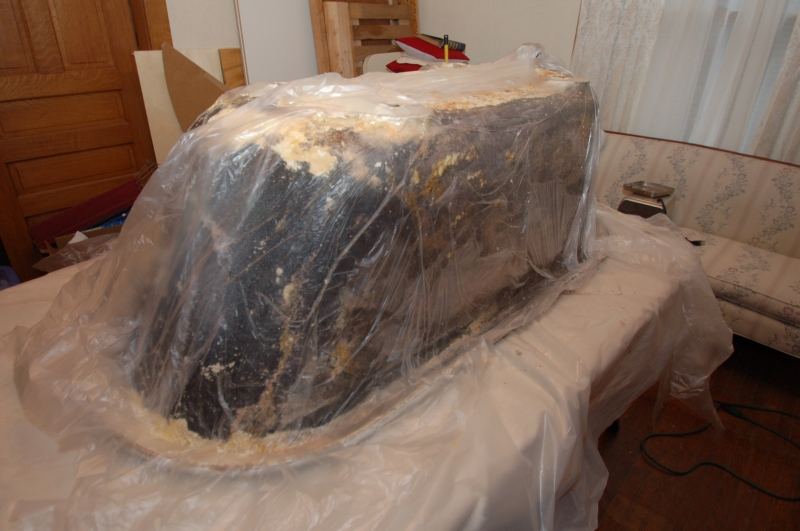 When it bubbles like this, you’re good. Use a scraper and a wire brush! 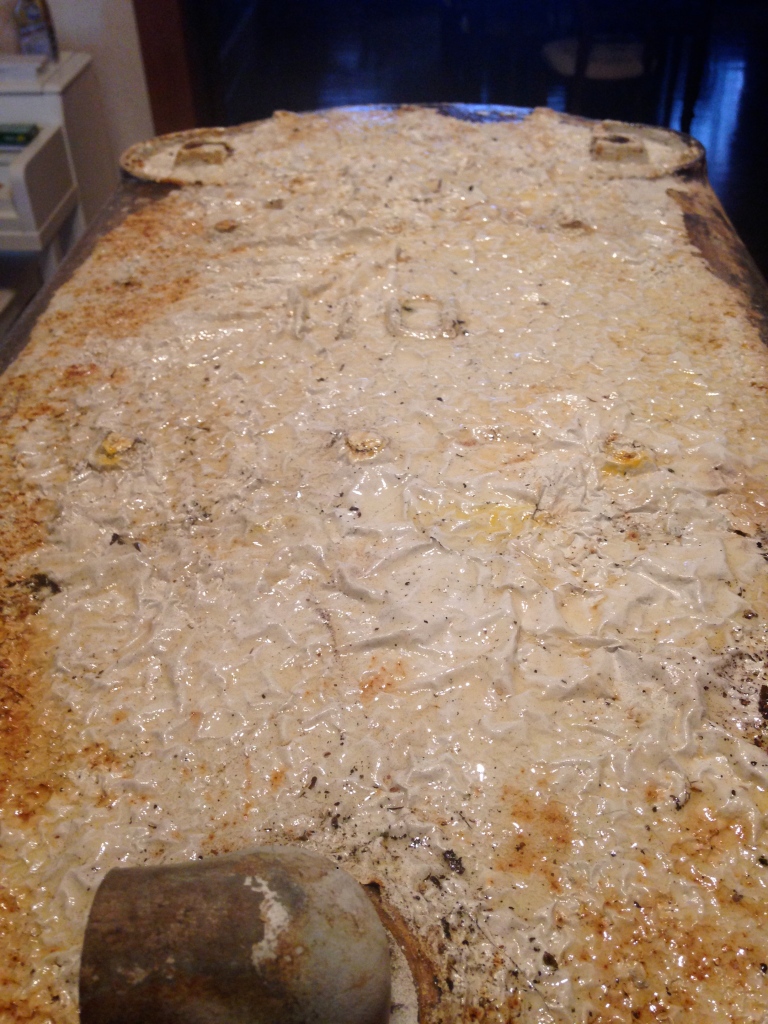 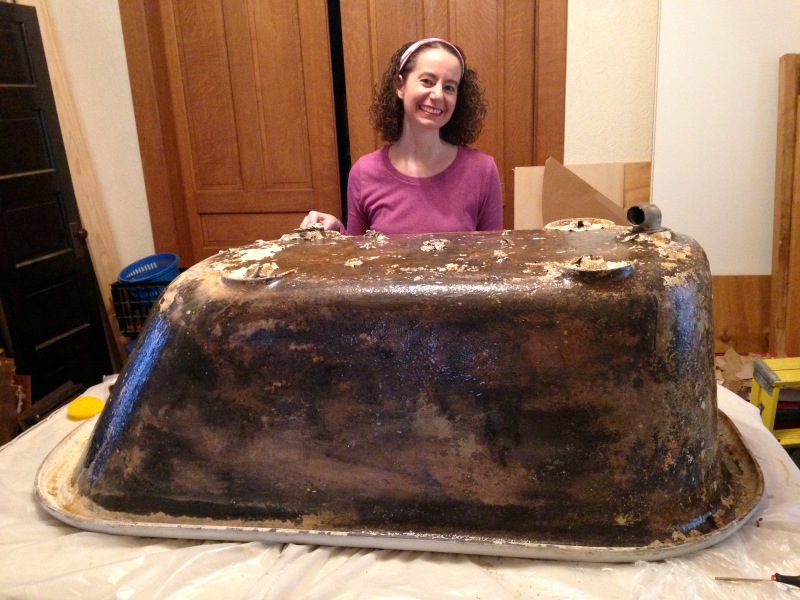 NO ONE WILL EVER SEE THE BOTTOM. So it’s ridiculous to scrape, right? 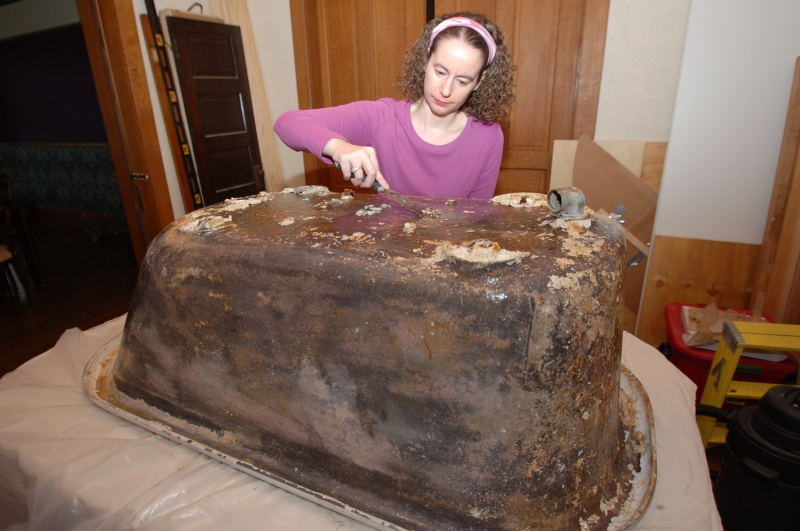 We knew the maker of the tub, which was prominent on the bottom, even with the paint. I looked them up, and deduced that the tub was cast between 1910 and 1920. Sure enough, once I stripped the paint off the bottom, there it was : September 7, 1916. I am SO glad I did the bottom. 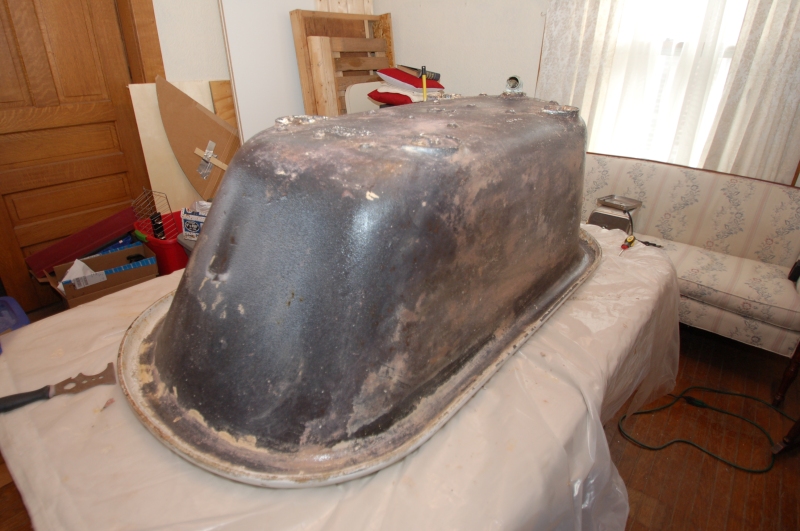 Here’s the tank, with the battery charger next to it. 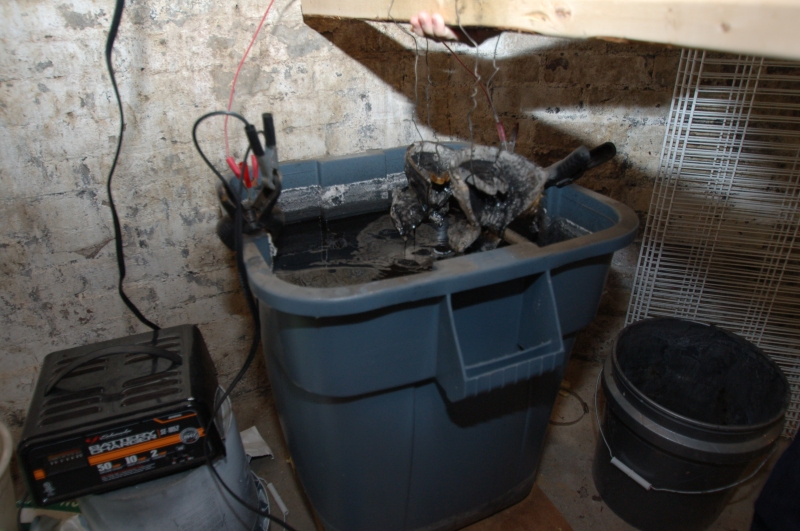 The rig Doug built for the feet. Only two at a time. 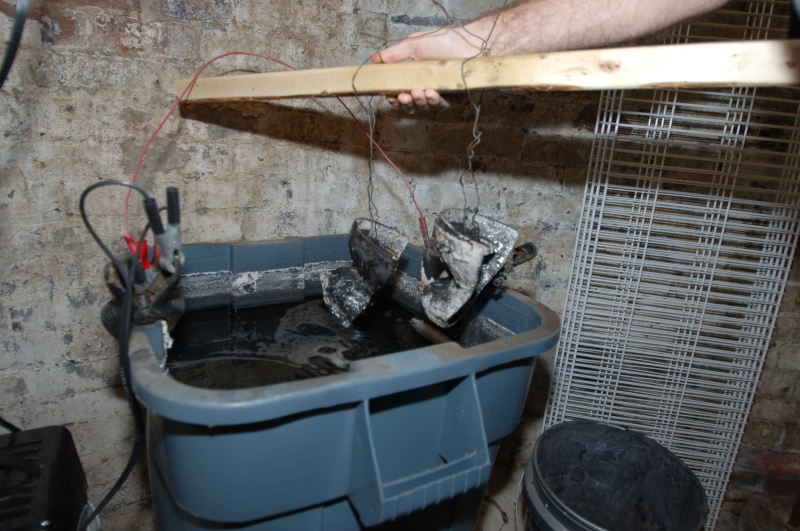 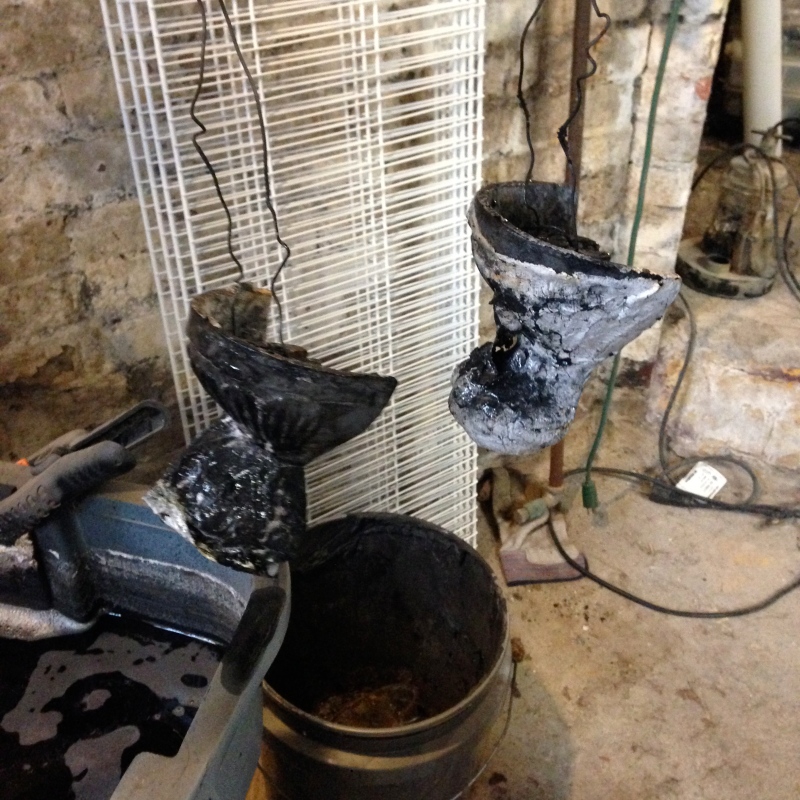 Here you can see the sheets of paint coming off.

This is before the black film comes off with a brush.

It’s remarkable. Down to bare metal, and no rust. 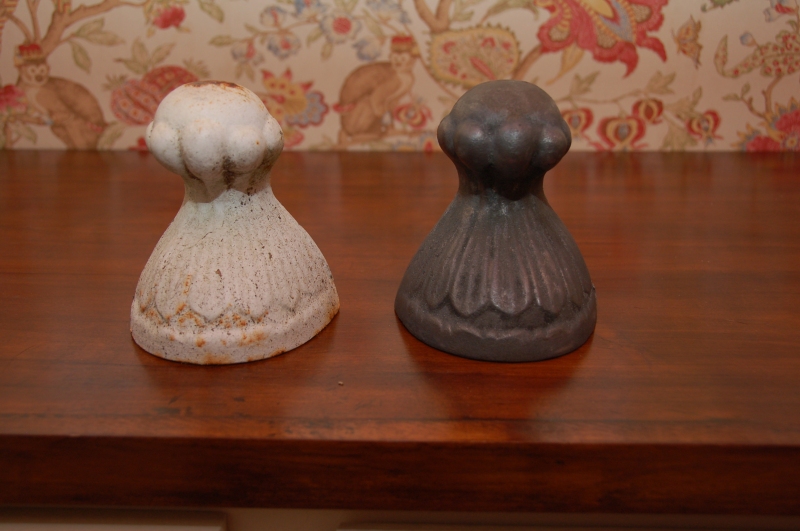 Time for paint! I started with a tinted primer. 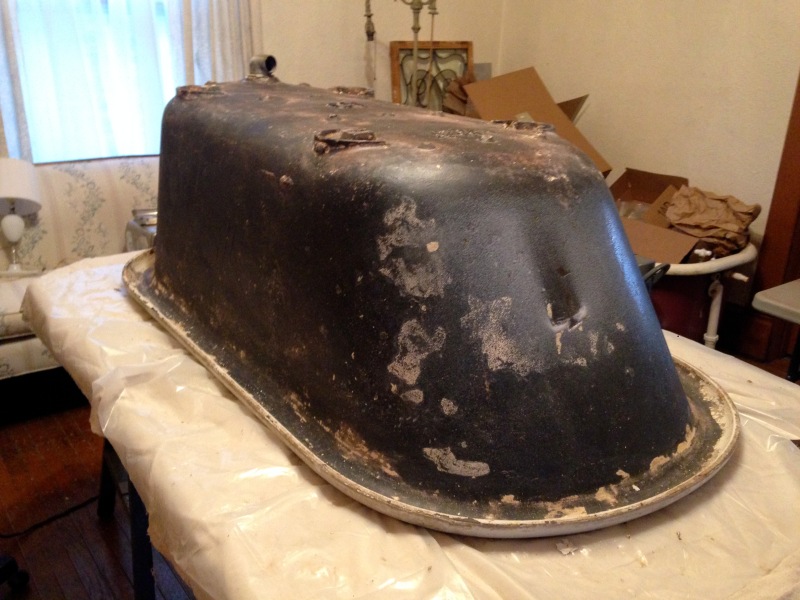 Now you can really see the maker’s mark. L. Wolff Company. Wolff Tubs were made in Chicago, and you can find more information from the Encyclopedia of Chicago. You can also check out their posted 1912 Wolff Catalog, which is awesome.

On one side of the tub, what I thought was paint-build-up, turned out to be casting flaws. Grrr. Initially, this is the side of the tub that was going to face the room. We might be flipping it. 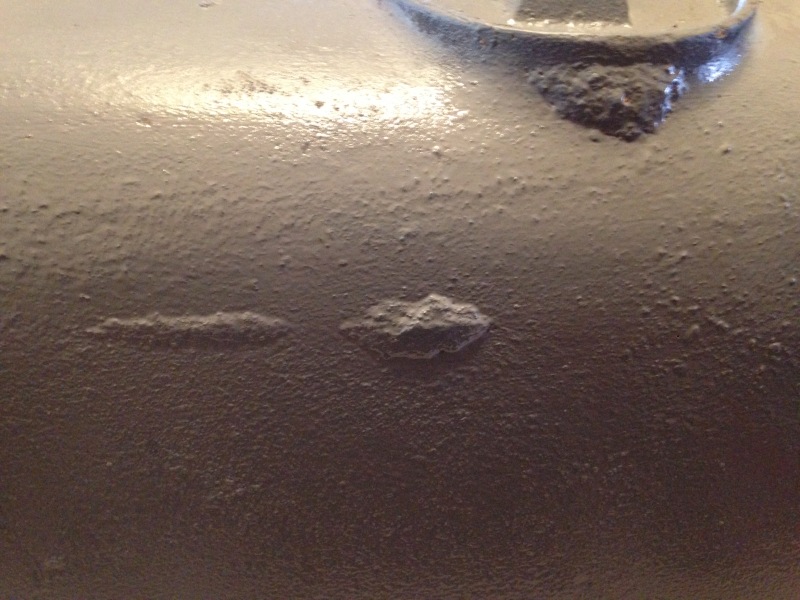 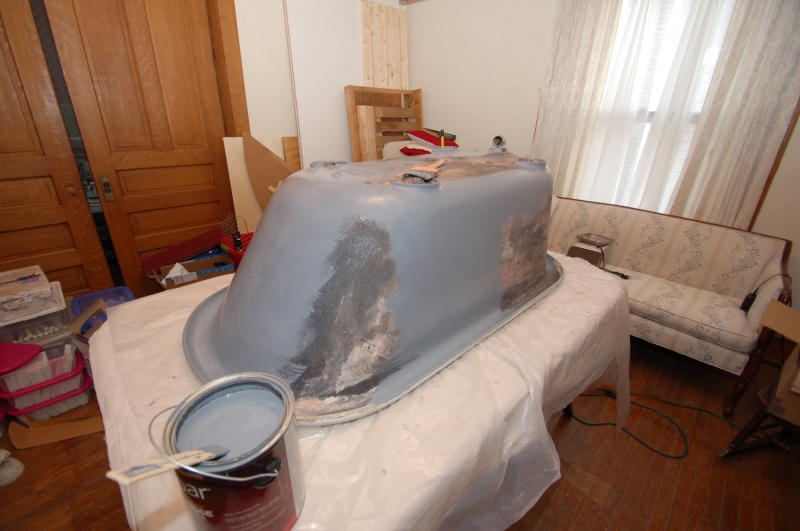 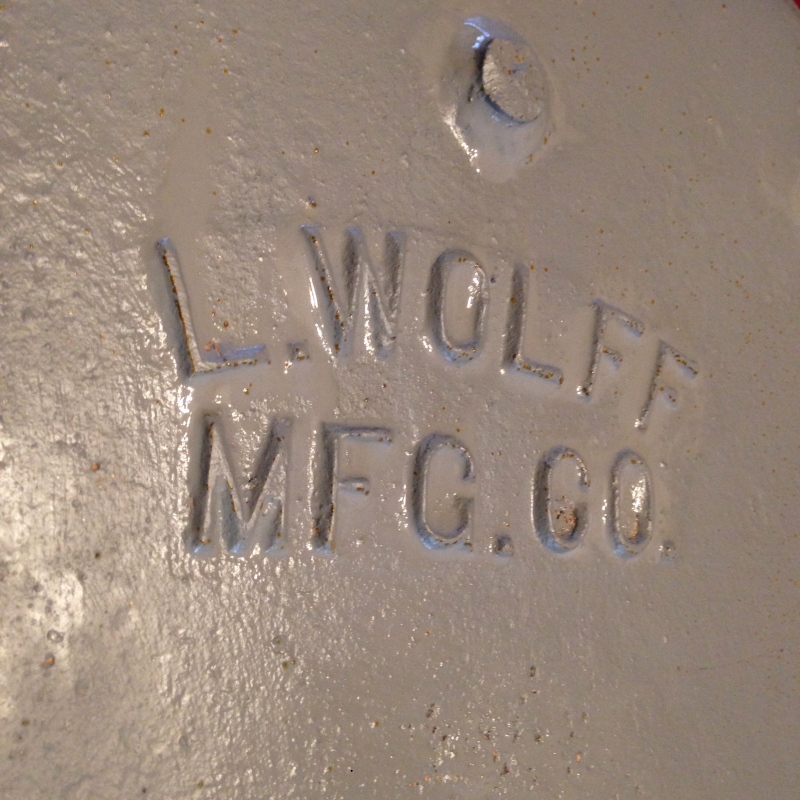 I took this picture, and sent it to Doug at work (I was on Spring Break). He wrote back, “Is that a Submarine?” I mean, I guess. I see his point. 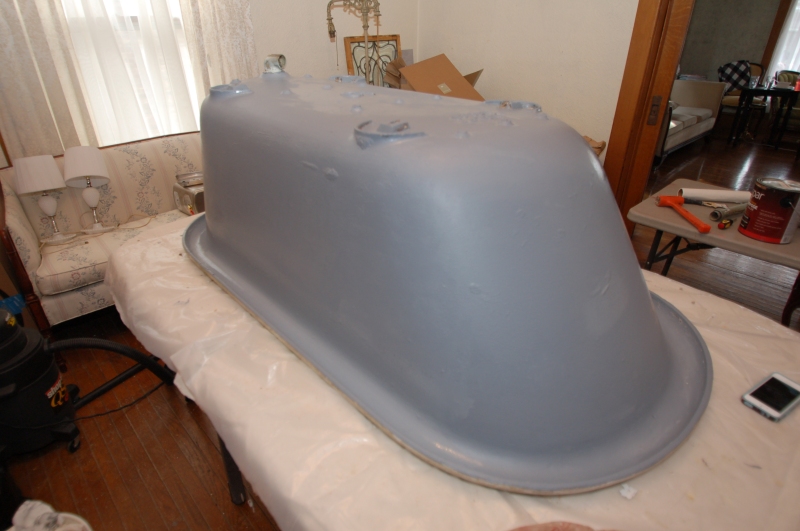 Next. Paint! This is shocking, but I’m not painting it a color. I KNOW. The room is going to be yellow and gray, so I went with a dark charcoal. The other tubs will be colorful! 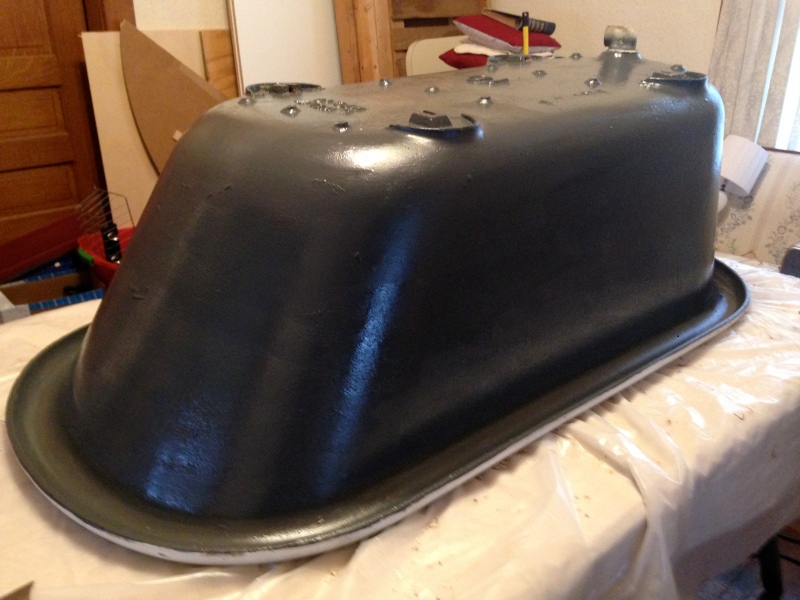 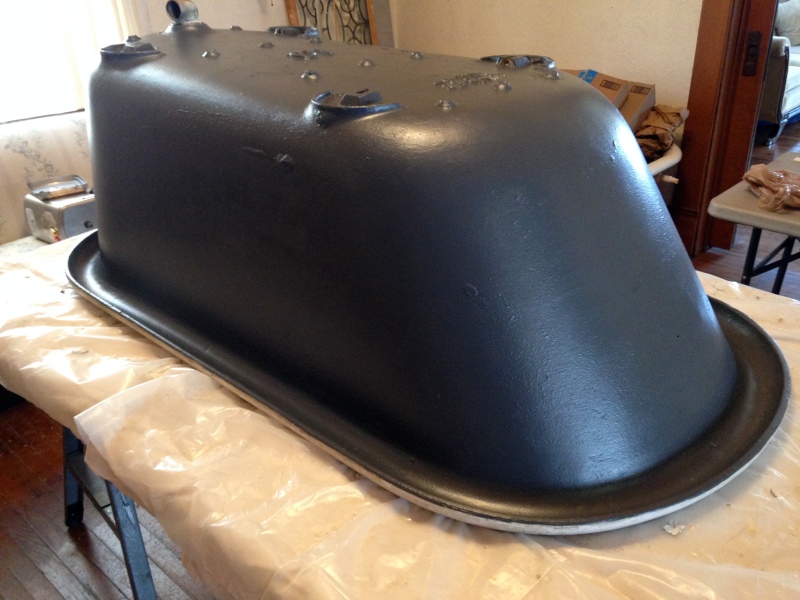 They looked good with just gold, but….. 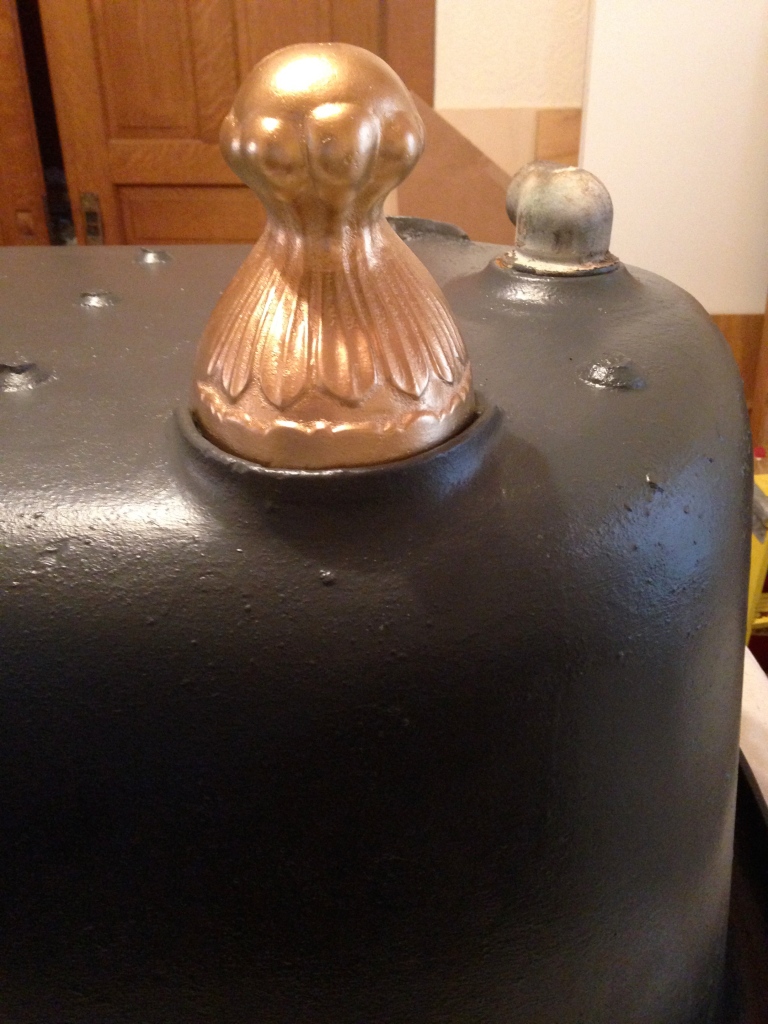 ….More is more with Victorians, right? 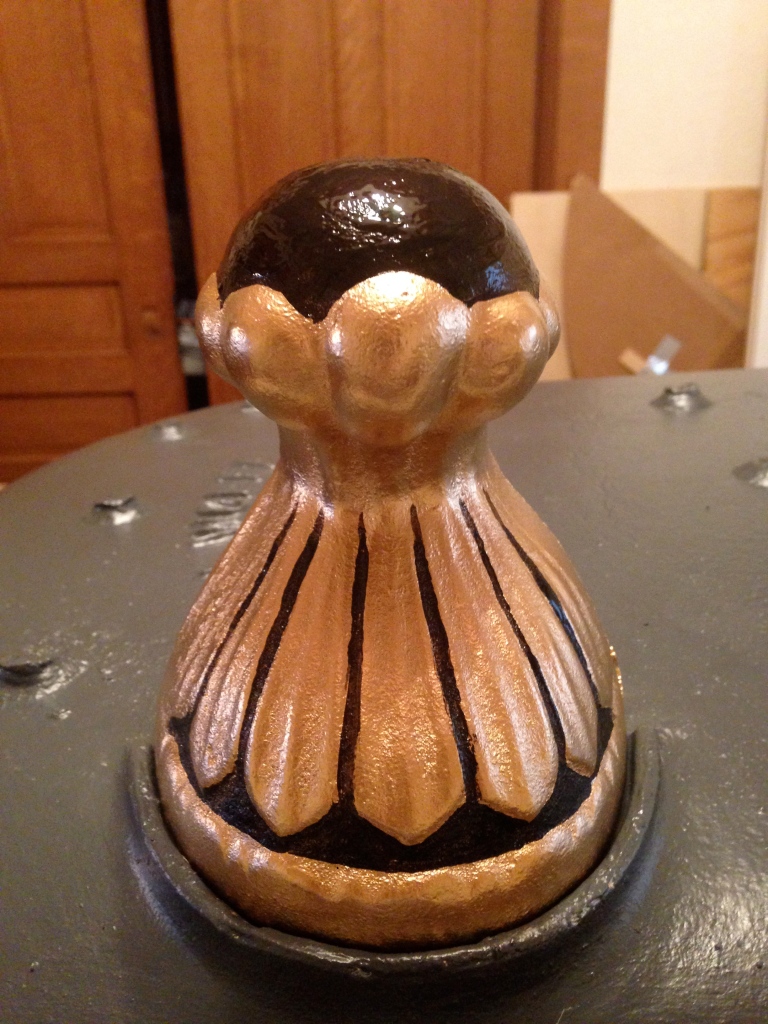 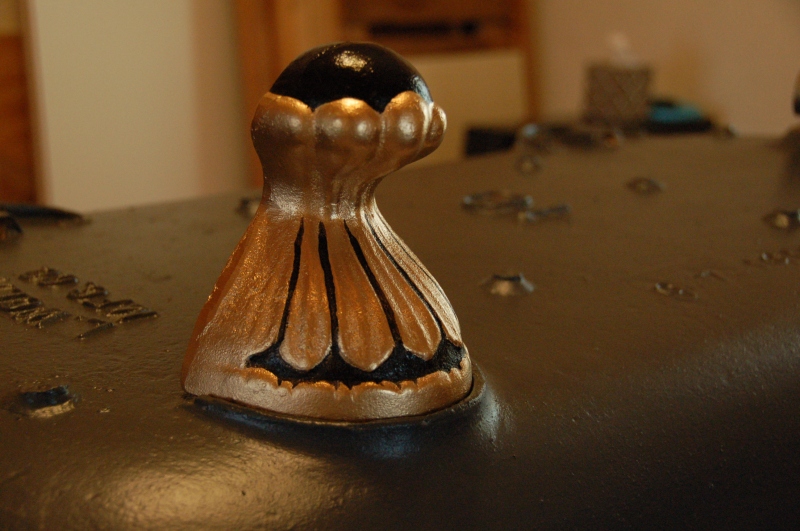 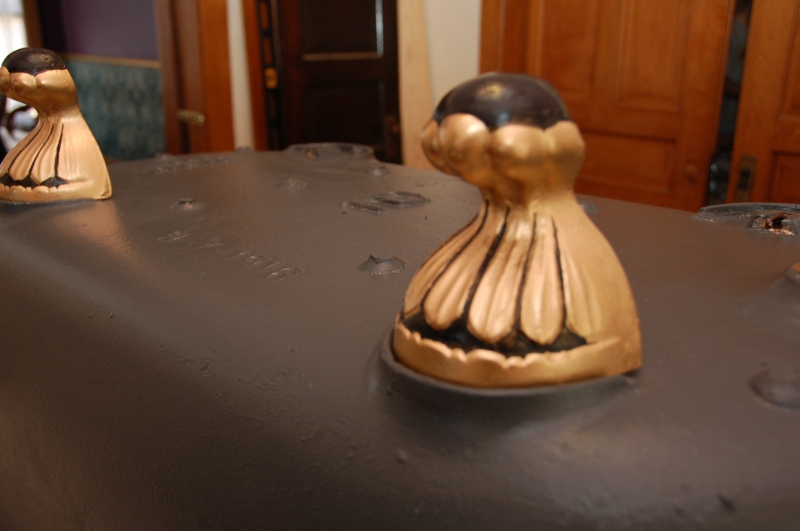 Only two feet are done – the others are still in the tank. But, soon! 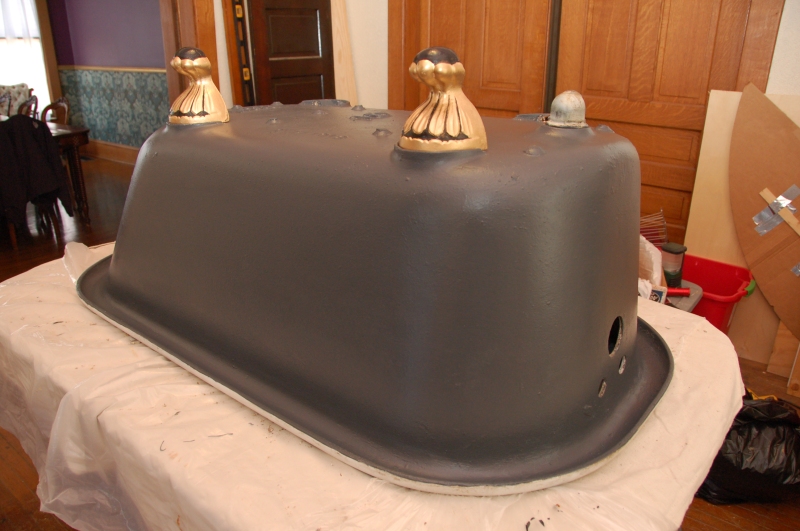 Then, we’ll hire out the inside. Still a ways to go before it’s installed, but it was a great project to do over break, and it looks brand new. I love it so much.

Staring Contest!
Sunny and lovely.
A few years ago, @oldhouseonline did a story on our porch, and they’ve reposted it today - check out their feed / bio to see! Thanks Old House Journal! - #repost @oldhouseonline ・・・ “The exterior is done, but we’ve got years to go restoring our Queen Anne.” @amyleigh_1902victorian #linkinbio⁠ ⁠ ⁠ ⁠ ⁠ #oldhousejournal #homesweethome #oldhouse #oldhome #interiordesign #restoration #renovation #architecture #architecturelovers #archilovers #houseportrait #house #instahome #home #design #housetour #ohj #queenanne #victorian
We love our pups, and they are constantly exited and loving and snuggly. Bonny (Black and White) is just two, and Oakley (Brown and White) is just over one. They are still VERY much puppies, and we love them. This week’s #52weeksofhome theme is “Dearest Dwellers,” and I can’t wait to see how you interpret this theme! Pets, Family, Portraits, Previous Owners, 👻...... Make sure you post and share and tag some friends to join in! (Photo 1 📷: @courtneycarneyphoto ) #52weeksofhomeweek8 📷 Don't forget to 🔹tag #52weeksofhome (and follow the hashtag) 🔹Please make sure to tag #52weeksofhomeweek8 so we can all find each other's pictures easily 🔹tag a friend to have them join in! I’m eager to see everyone’s posts and draw delightful inspiration each week! It's just a fun way to play show and tell! 📷 Full list of weeks on my page, and I’ll post the current and upcoming weeks with highlights of the week each weekend!
It’s in, and I’m so happy. Picture two is the matching one (original to the house) in the Entry Hall. This new one in picture one is in the Parlor. We found it at a salvage store years ago.
I love lighting. So much. This week’s theme for #52weeksofhome : was “Lighting,” and I audibly gasped about a million times looking through the hashtag. (Have you looked through it yet? Because it’s freaking MAGICAL.) Choosing favorites was like asking a parent to pick a favorite child and I feel guilty and horrible because there was SO MUCH AWESOMENESS, so PLEASE check out the tagged feeds for more eye candy - and look at the hashtag for more pictures from this week! If you haven’t joined us, jump on in! We want to see your projects (and help cheer you on!). Make sure you share and tag with anyone who should join us! #52weeksofhomeweek7 🏡 Next week’s theme for Week 8 is “Dearest Dwellers.” Show us the “who” of your home - pets, family, portraits, previous owners, ghosts (seriously. I’d love a ghost story)! 🏡 Want to jump into the photo challenge? Jump in this week, or start at the beginning (or any other week). Please make sure to tag #52weeksofhome, as well as the numbered hashtag for the week so we can all find each other's pictures easily! You can find a complete list in my feed, but I’ll also post the current and upcoming here - just swipe. It’s just for fun - a grown-up (or not) version of show-and-tell! Check out the hashtags for more pictures from some amazing homeowners.
Don’t be sad, but we’re replacing the grate on the right with the grate on the left. ⭐️❤️⭐️❤️
Kitchen = Destroyed. But now I have soft pretzel bites, so it was worth it.
My kitchen is super clean right now. So I think I’m going to start baking and destroy it. 🤷🏻‍♀️
For your enjoyment : When we moved things around in the future master bedroom (storage for now) so we could move all the first floor to this room while we work on the floors, the insane mural from the 1990s was unblocked and easy to photograph. I mean, it’s so well done, even if it’s bonkers. It’s a mix of things exacto-knifed out of wallpaper and paint. It will be well documented - but it won’t stay. I don’t need cherubs and bunnies and birds watching me sleep. 🤣