At some point in (we think) the 1990s, several rooms of the house had a pressed ceiling added. They aren’t original, and they’re some sort of plastic / polymer. They mimic anaglypta or lincrusta a little more than tin – the detail work doesn’t have the same depth as tin. Overall, they aren’t too bad.

And we have a rule in this house – if something isn’t actively falling down, we’re not going to touch it yet. I don’t know that these are the ceilings I would choose to add, but I do like them.

And, when we did the front bedroom, I realized that when they’re painted, I like them even more, because the “plasticness” of them goes away. 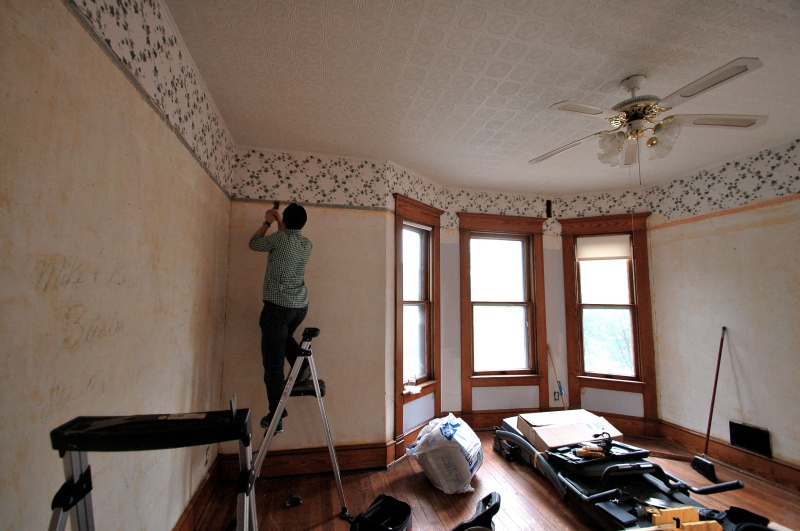 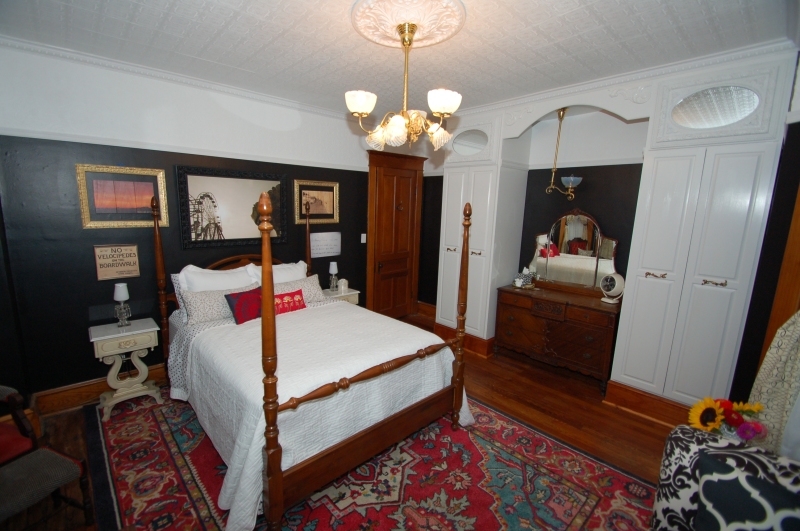 The ceiling in the Library is the same, but is this dusty 1990s rose color (complete with teal accent!). 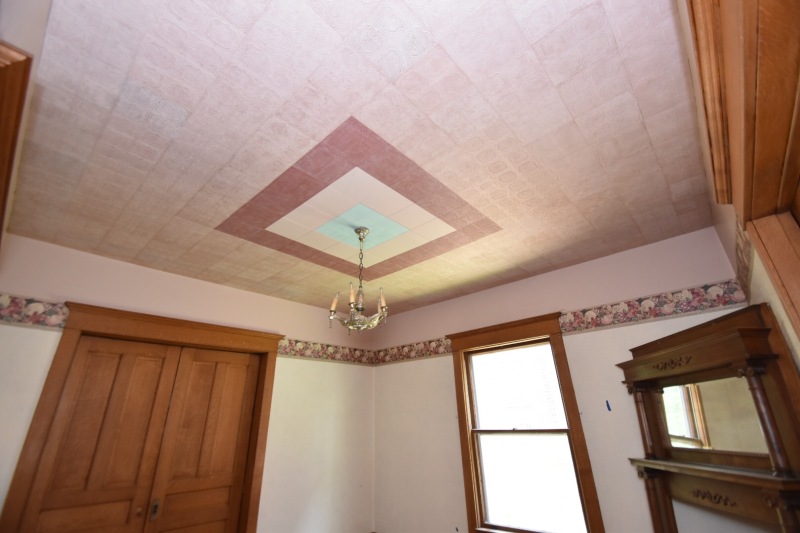 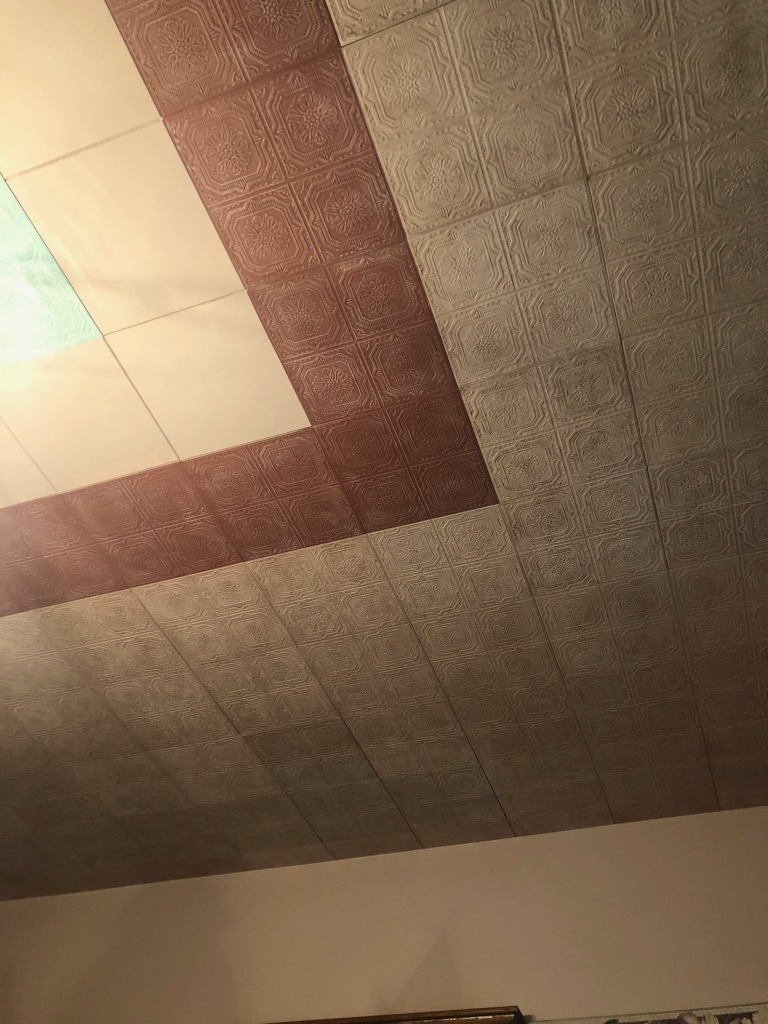 And if you remember, the plan is to add some beams  / woodwork to the ceiling. 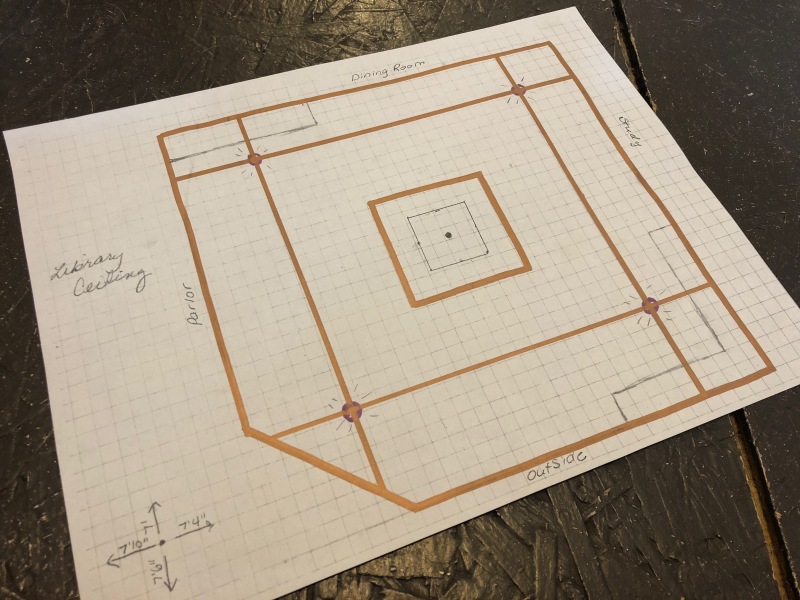 So, I decided to be super crazy, and paint the ceiling GOLD.

Step one, was to put up my renovation BFF – the scaffolding. Seriously, this is the best purchase we have EVER made. 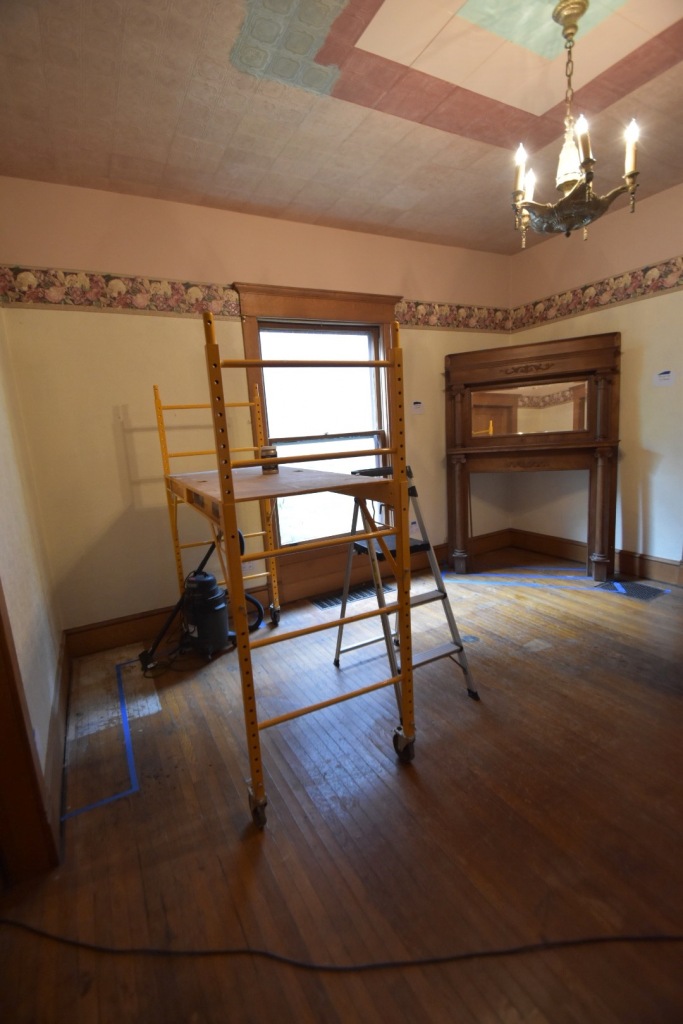 And I got to work! 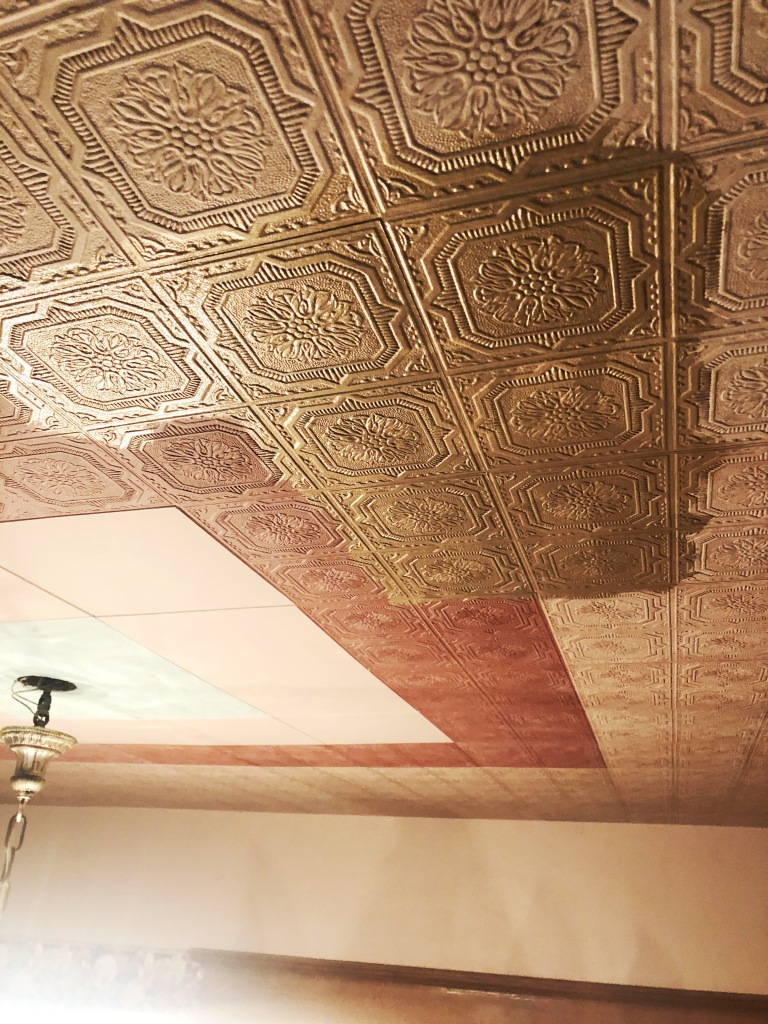 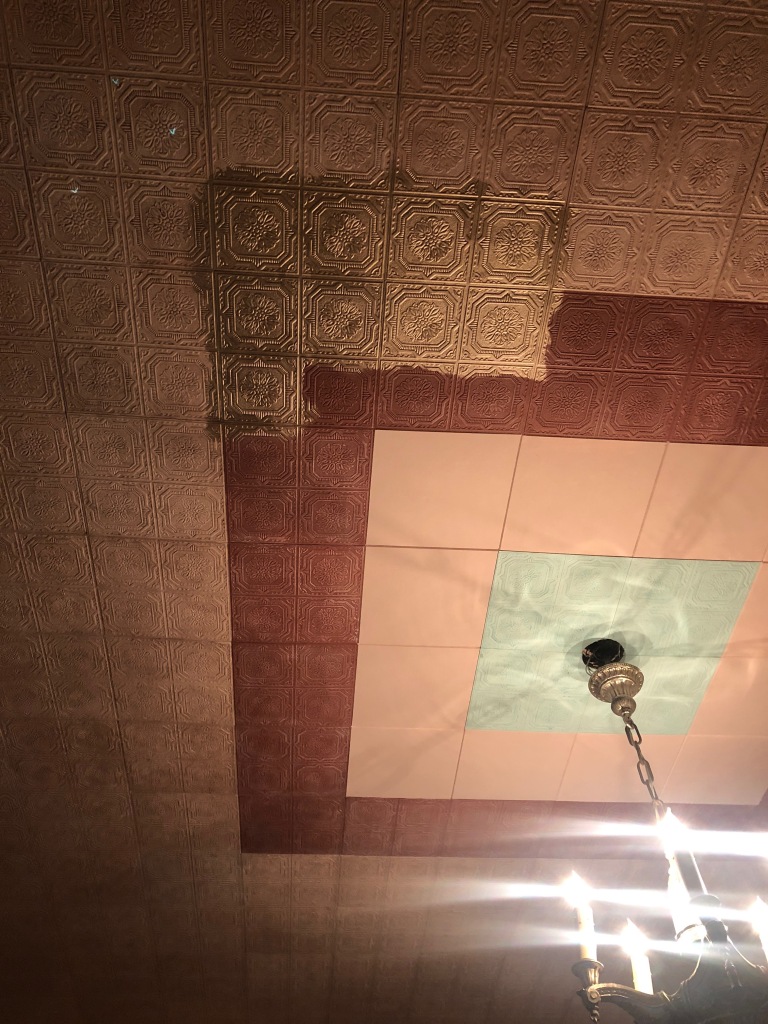 I hand-painted the whole thing. I’m not a fan of using a roller on a ceiling – It’s so messy, and especially with the texture, I have more control over the job if I’m using a brush. It does take more time, and I would set a timer and just paint for about 30 minutes before doing something else, so I didn’t get sore. 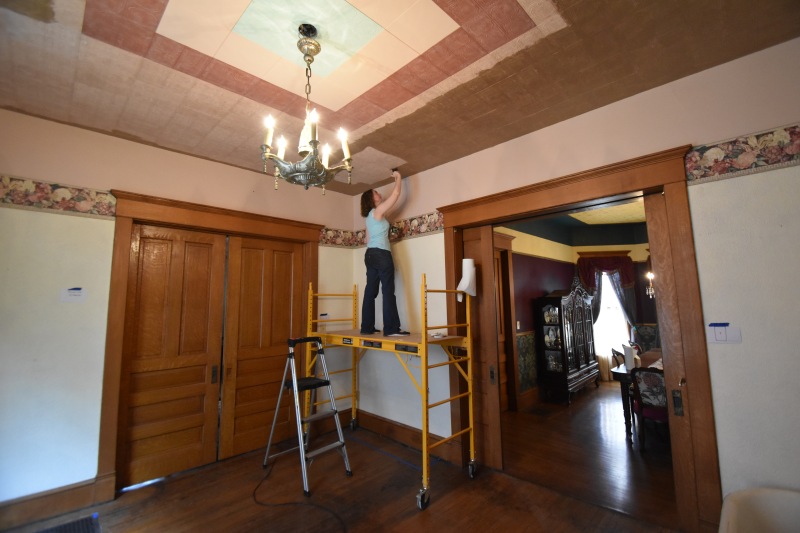 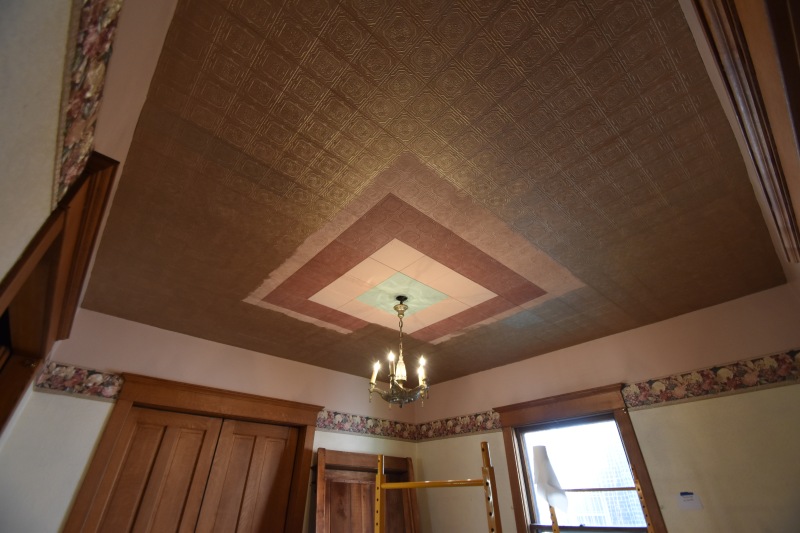 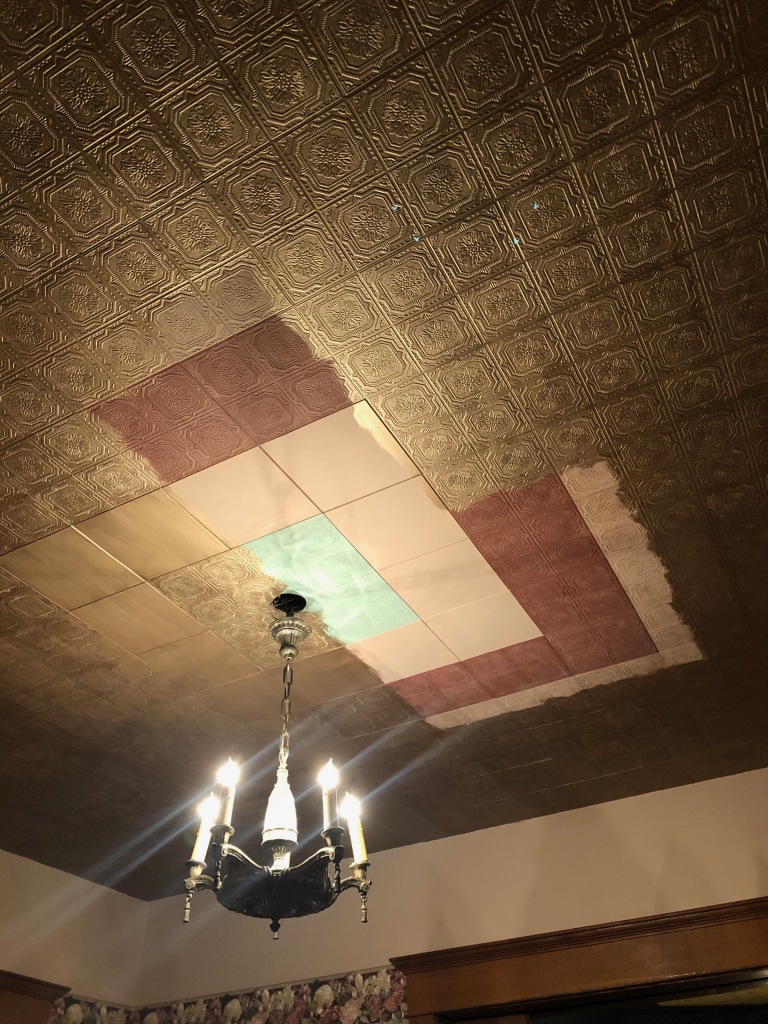 I did a bunch of looking around for metallic paint, and this is what I used. On the reviews, people said that the “Warm Silver” color was more of a soft gold, and that sounded perfect to me. I did the matte as a base coat, and the satin finish as a top coat. It covered REALLY well. 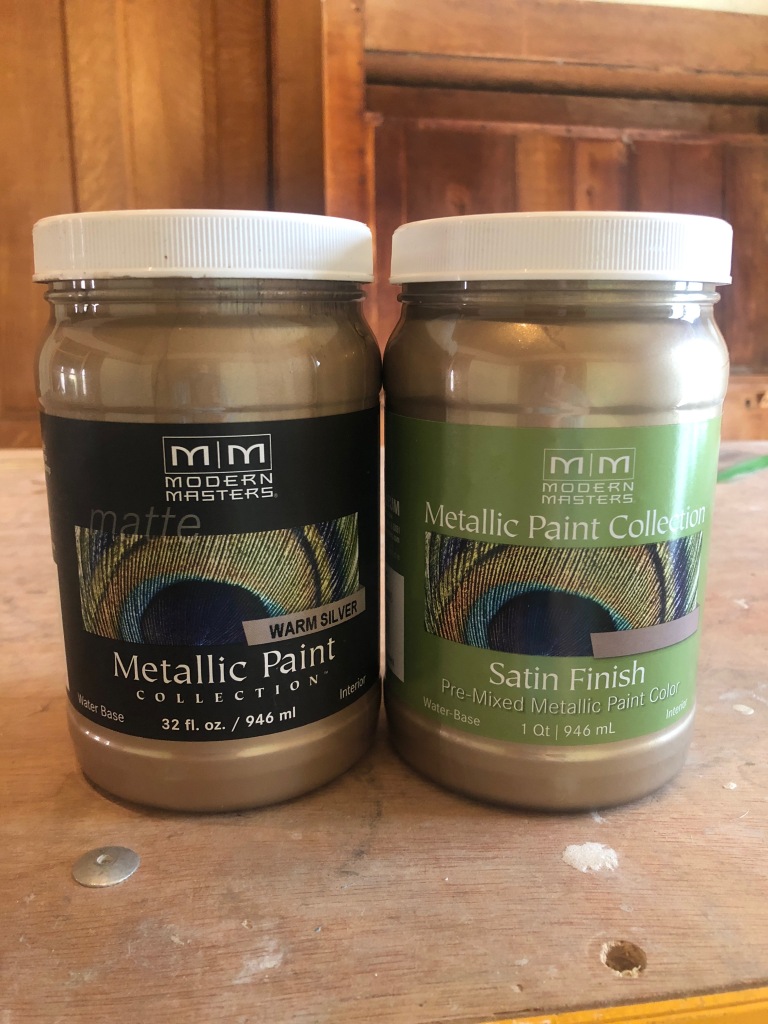 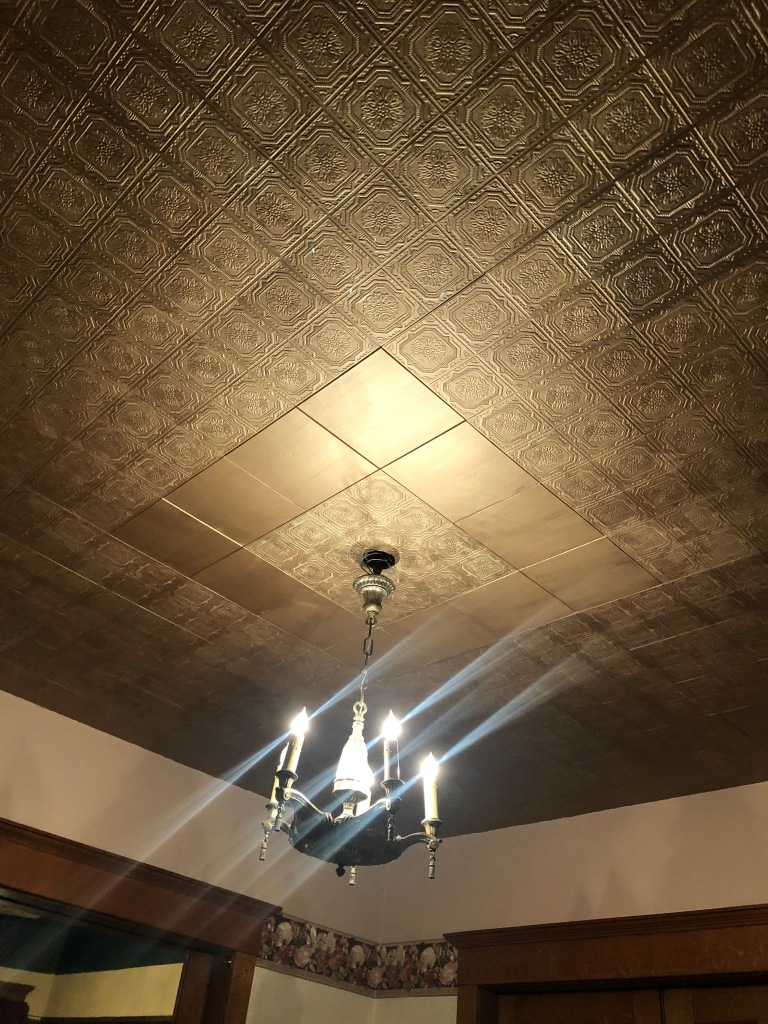 The lighter-colored square is the satin finish – just a little more sparkly! 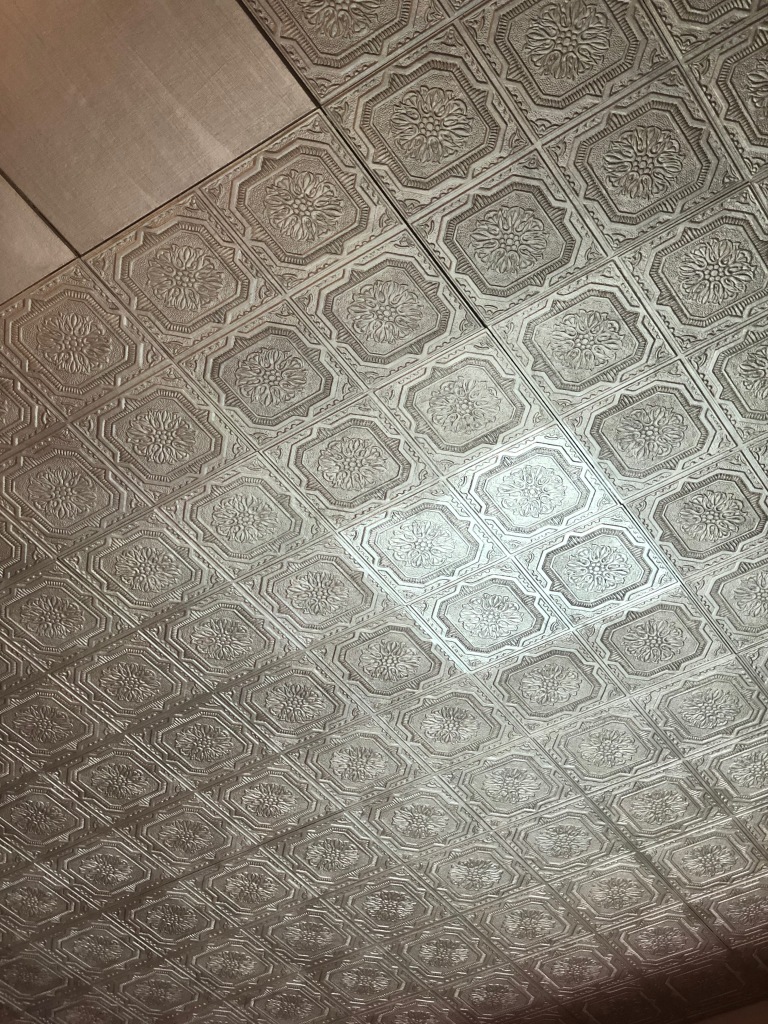 It’s ridiculous. But once the room is done, it’s going to be awesome. I think. 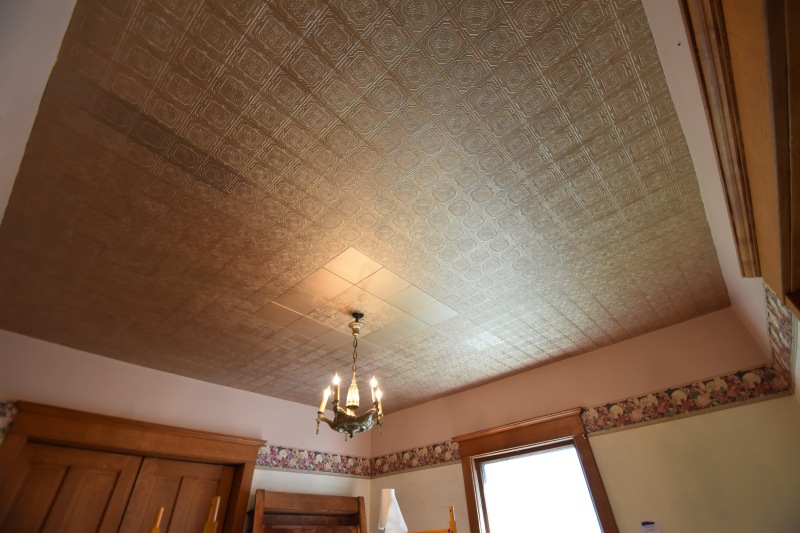 It took a couple of weeks off and on to get done, but I had some excellent supervision. 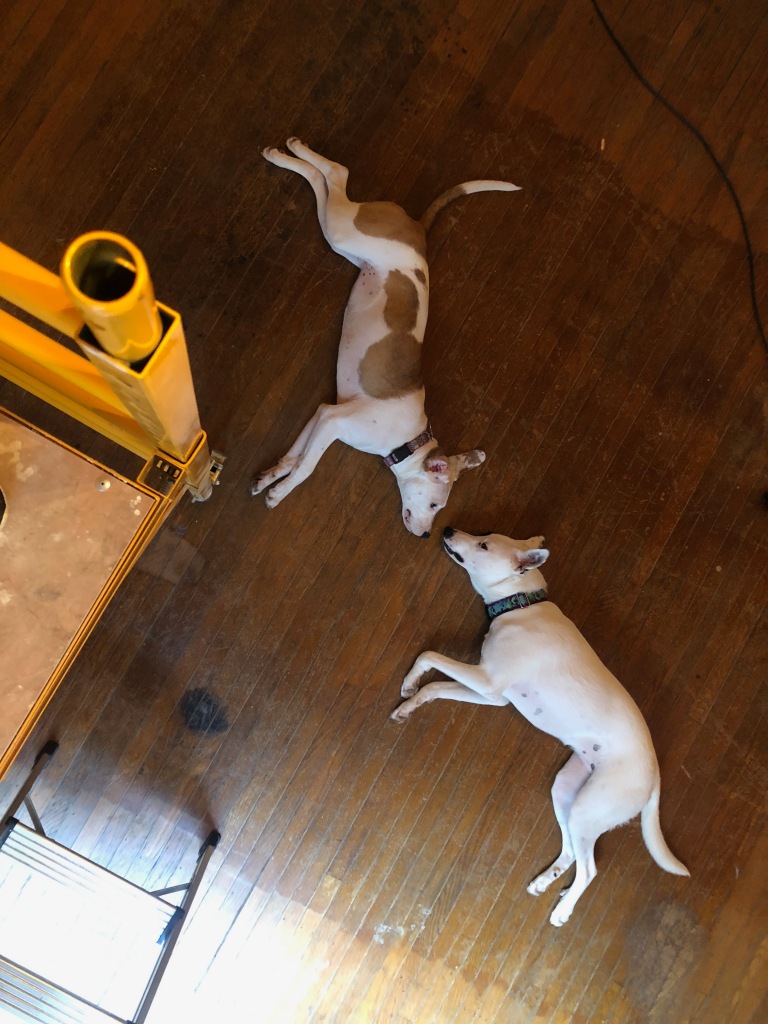 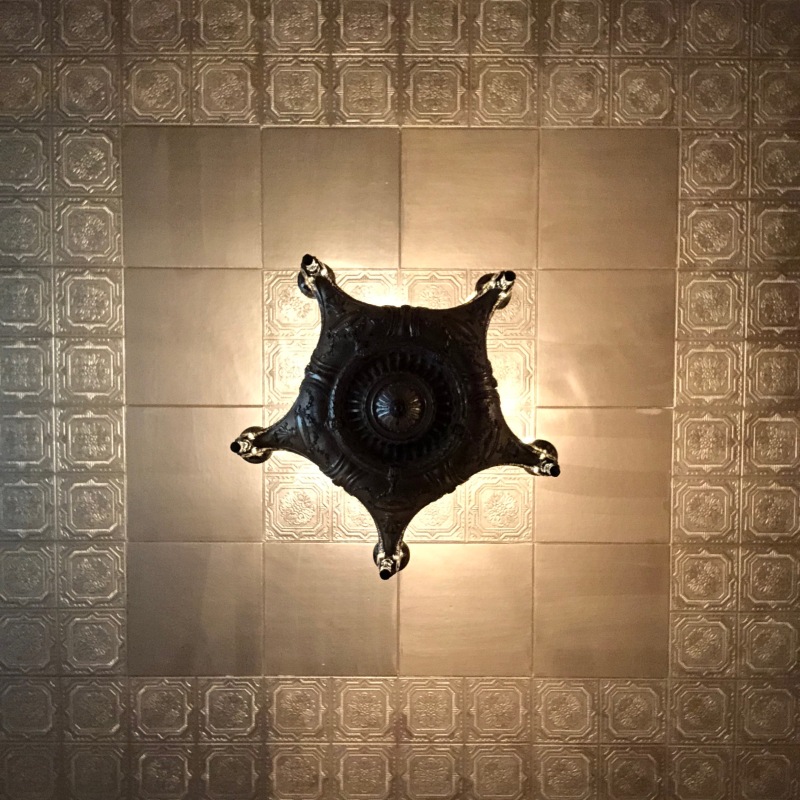 The room looks so tall when you’re lying on the floor! 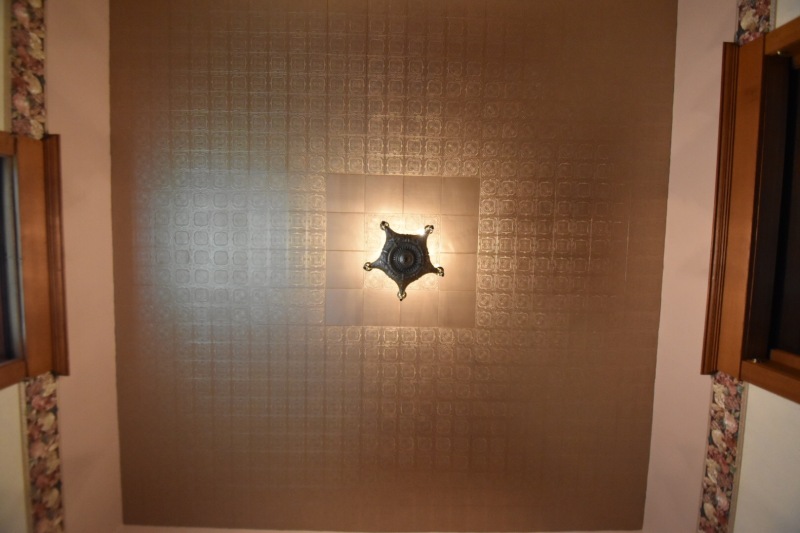 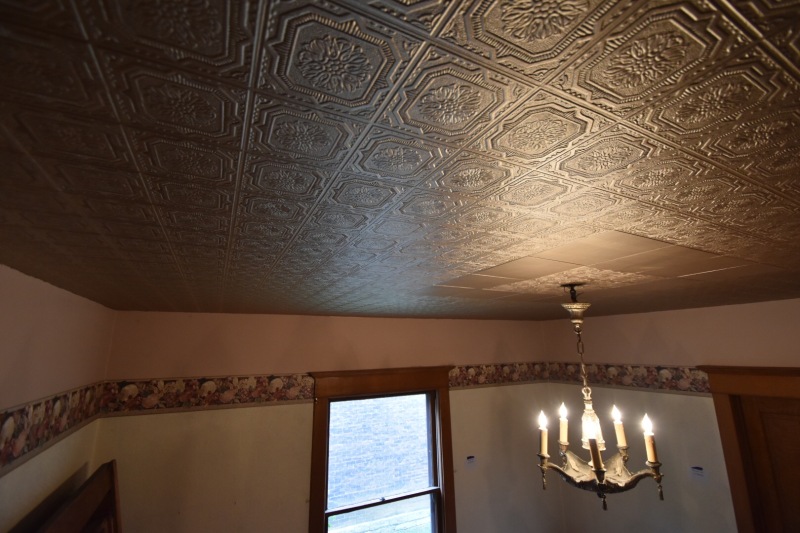 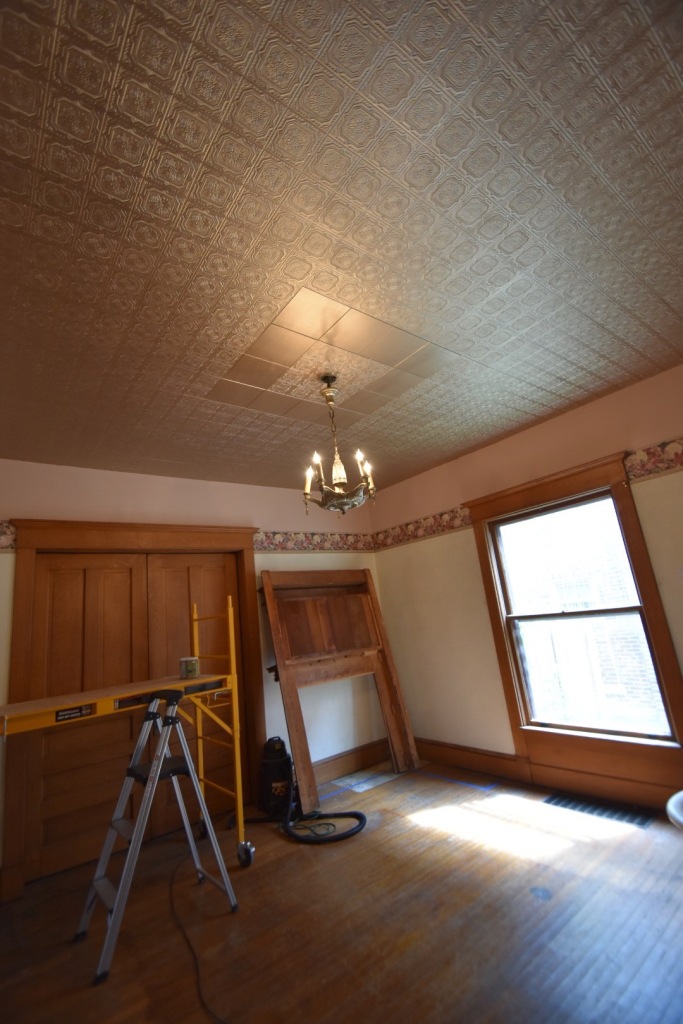 I cannot wait for this room. I’m really excited about it, and once we get through all the roadblocks of the floor, and can get moving, it’s going to be SO MUCH FUN! 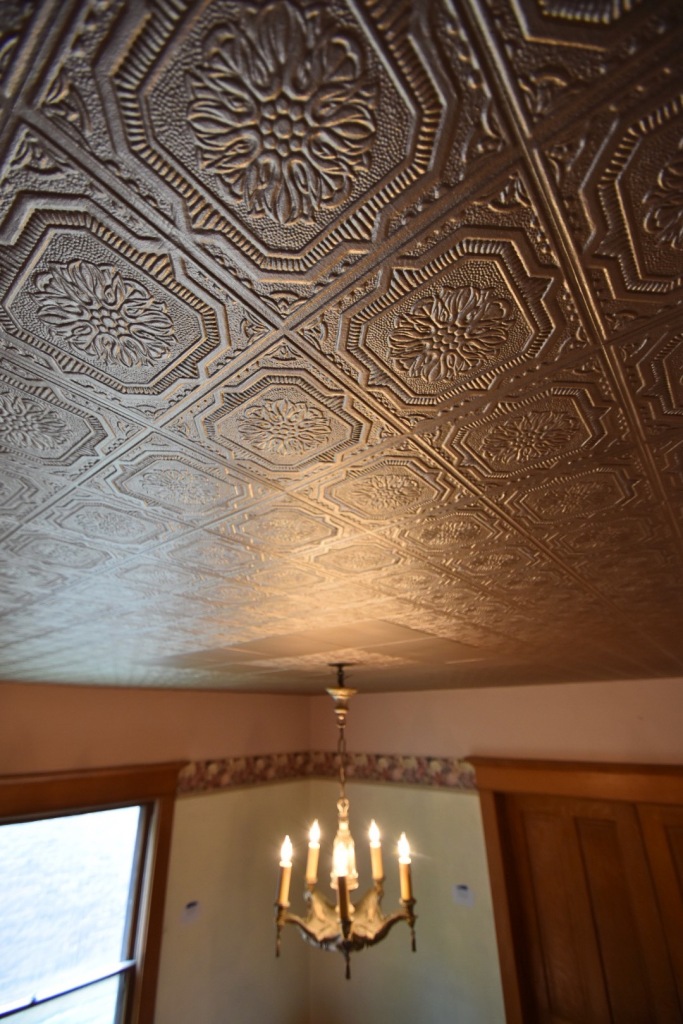